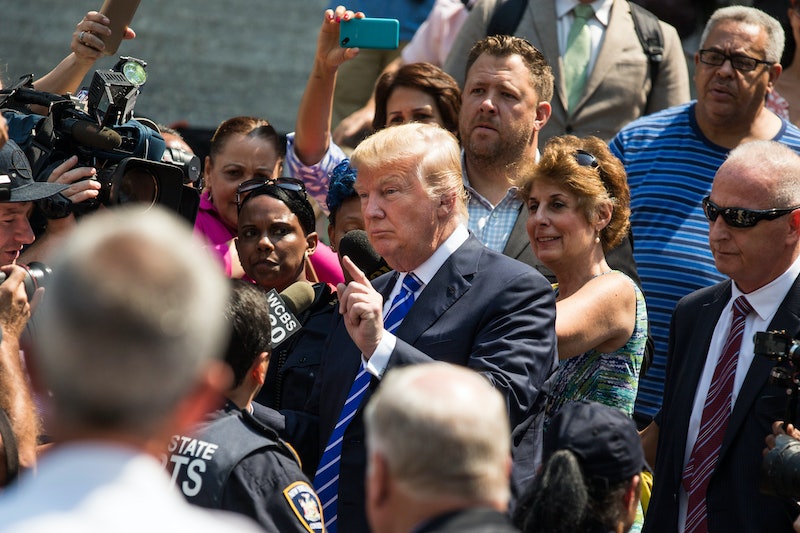 Donald Trump has been polling well among Republican voters over the summer, and now new polling data shows that he's not only polling well with the conservative base overall, but that specifically he's popular among Republican women. Despite the fact that Trump has said many crass and rude things about a variety of women, including conservative television darling Megyn Kelly, Republican women are saying that they are pretty likely to vote for Trump over other Republican presidential candidates. Gallup released data on Monday revealing that Trump is polling 50 percent favorably among Republican women, trailing only Jeb Bush and Mike Huckabee, who are both polling 53 percent favorably with women. The Donald hasn't exactly positioned himself as a female-friendly candidate over the course of his campaign so far, so what exactly are pro-Trump women saying about Trump?

A Reuters/Ipsos poll last week actually put Donald Trump at the very top of the Republican pile among women, saying that 20 percent of Republican women would vote for Trump in November. Given these numbers, one doesn't have to look too far on the net to find women speaking out in favor of Trump. Some are even gaining a lot of attention for their pro-Trump statements. Here are some of the most notable words from women in support of the Donald.

These two women have gained some notoriety online for their enthusiastic defense of Donald Trump against some of his critics, including Montel Williams and Lindsay Graham. They also have praised him for being the only candidate who would "secure that damn border."

Ann Coulter has been pretty outspoken about her support of Trump, particularly his immigration plan.

Reuters reported that various women were quick to defend and continue their support for Trump even after he made a comment about Megyn Kelly, ostensibly saying that she was tough on him during the Republican debate she was menstruating. In defense of her preferred candidate, Kelly Ray told Reuters:

I like how disgusted he is in how things are right now. I'm not fed up with Donald Trump. I'm fed up with Barack Obama.

He's a little rough around the edges because he goes against the grain.

It doesn't matter what Donald Trump says. The news media is going to twist it. I heard the original comment and it shouldn’t have been taken that way.

Shame on the public for presuming something, for putting words in his mouth.

More like this
24 History-Making Black Women You Probably Didn't Learn About In School
By Ayana Lage and JR Thorpe
Gillian Anderson's New Netflix Drama Is *Nothing* Like 'Sex Education'
By Frances Stewart
Matt Hancock’s TikTok Is The Most Matt Hancock Thing Ever
By Sam Ramsden
Eurovision Has Been Given A Whole New Look Ahead Of Its Liverpool Debut
By Bustle UK
Get Even More From Bustle — Sign Up For The Newsletter
From hair trends to relationship advice, our daily newsletter has everything you need to sound like a person who’s on TikTok, even if you aren’t.