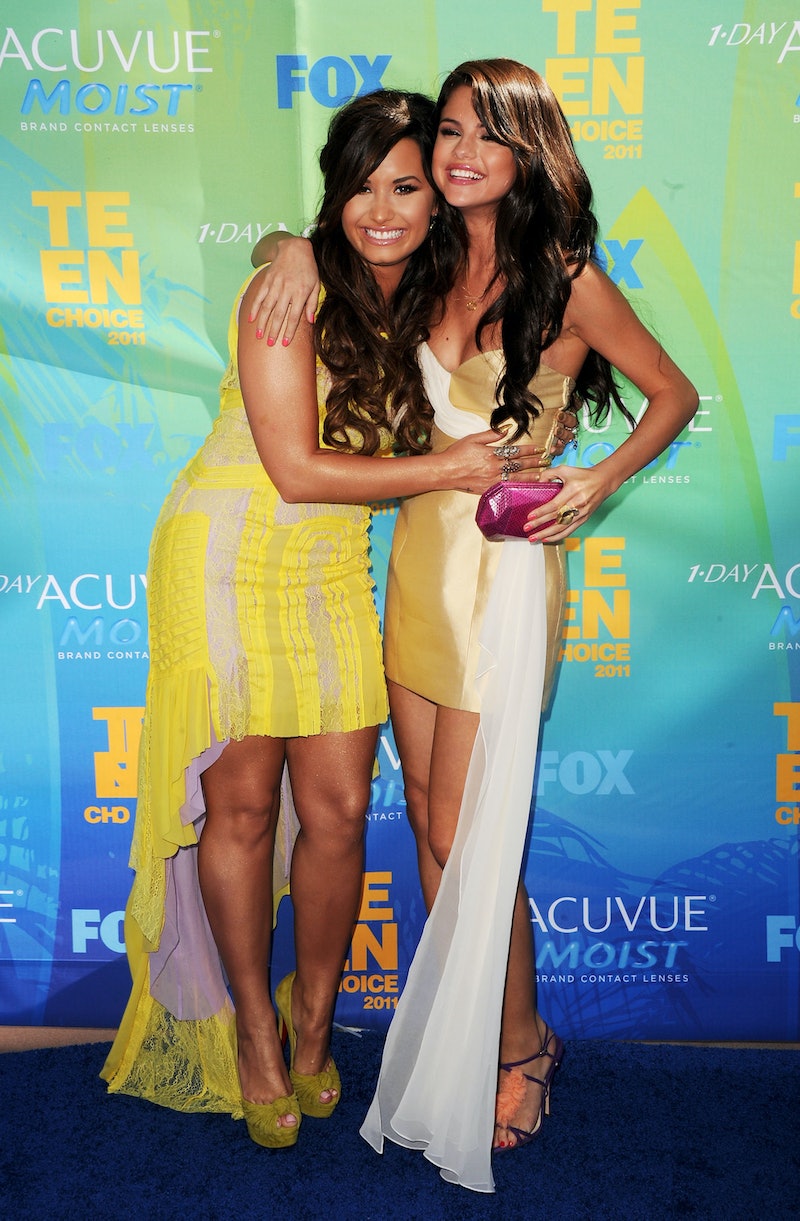 It looks like Demi Lovato and Selena Gomez are back to their BFF status. The two girls posed for a picture on Selena's Instagram together earlier this week, just after news broke that Selena stood by Demi's side during Demi's stint at a rehabilitation facility, where she was being treated for bi-polar disorder, drug addiction, and an eating disorder.

Demi Lovato and Selena Gomez have been friends since their days on Barney & Friends, but their friendship hit a rocky patch back in 2010, when reports claimed that Selena Gomez's friendship with Taylor Swift caused a rift between the old besties. While we love Taylor Swift, we're thrilled that Selena and Demi have mended fences and are hanging out again. These two were adorable. They recorded YouTube videos together that actually made them seem like regular, everyday, non-famous best friends (a little different from Taylor and Selena's snarking on the red carpet, but whatever, it's not a competition...) Plus, they even co-starred in an Original Disney Channel movie, The Princess Protection Program, which, okay, was kind of a dumb Princess Diaries knockoff, but totally solidified their friendship.

We're thrilled that Selena and Demi are back together, but we kind of can't help but miss these other high-profile friendships that seemed to go totally MIA. Here's hoping that we'll see more reunited BFFs in 2014.

Miley Cyrus and singer/dancer Mandy Jiroux were inseparable during Miley's Best of Both Worlds tour (you know, back when she was still half Hannah Montana). Like Selena and Demi, these two had their own YouTube account, "The Miley and Mandy Show", which featured fun videos of the duo goofing off (and sometimes maybe throwing shade at Selena and Demi... sorry guys). We haven't seen the girls hanging out together in a long time — Mandy is currently working on music and Miley's busy twerkin' her days away. But Mandy did stand up for her former BFF's recent VMA's performance in an interview with E! News, stating that she gave a "memorable performance" and that it's all a part of her "fun personality".

These two talented ladies made a few "Funny or Die" videos together that left us rolling on the floor laughing. In an interview, Natalie Portman had these kind words to say about the Parks and Recreation star: "She would fight beasts 10 times her size to protect the people she loves. She is the kind of friend who can sub in and love you through the times when you can't necessarily love yourself."

Forget Heidi and Lauren, these two were the real epic friendship story on The Hills. Lo Bosworth was always there to give Lauren solid life advice and was basically the realest thing about The Hills. Though Lauren Conrad tends to keep her personal life fairly private these days, word of her upcoming nuptials did have us wondering when we would see pics of her and bestie Lo doing fun wedding things. Though these two haven't been spotted in public together in a while, Lo has confirmed that she will be a bridesmaid in Lauren's wedding to boyfriend William Tell. Ahh!!!

Nicole Richie and Paris Hilton were the It Girls in Hollywood during their time on their reality show The Simple Life, but ended up feuding during production. Though the two patched things up, their forever-friendship seemed to fade out over the years. Recently, though, it seems that the two have made amends — Paris recently posted an Instagram pic of the two girls, tagged with #OldFriends. Aww!

More like this
Selena Gomez Explained Why A Past Album Cover Made Her Feel “Really Ashamed”
By Grace Wehniainen
12 Photos Of Britney Spears' Wedding Guests, Husband, Outfits & Dances
By Grace Wehniainen
Kendall Jenner & Devin Booker Reportedly Broke Up After 2 Years Of Dating
By Jordyn Tilchen
Justin & Hailey Bieber's Bond Is "Unbreakable" Amid His Ramsay Hunt Diagnosis
By Bustle Editors
Get Even More From Bustle — Sign Up For The Newsletter