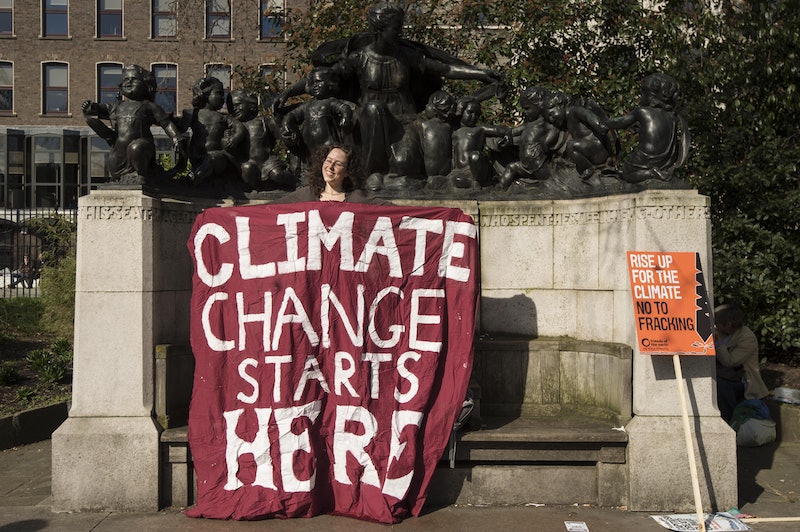 Ahead of the Paris climate talks in December, Islamic leaders have released a declaration on climate change that urges Muslims around the world to rapidly phase out of fossil fuels and work toward a 100 percent renewable energy strategy. They are not the first religious leaders to speak frankly about climate change, either. Earlier this year, Pope Francis released an encyclical in which he described global warming as "an urgent challenge to protect our common home." Politicians around the world have also been discussing climate change more explicitly — in the United States, the Democratic Party describes itself as committed to curbing the effects of climate change. Based on all of these world leaders' reactions, you would think that fighting climate change is a no-brainer, but as the following climate change memes indicate, the fight against global warming continues to face a frustrating amount of resistance.

You don't have to look very far to see the ridiculous things people say to get out of accepting any level of responsibility for climate change. The GOP alone, from Jeb Bush to Rick Santorum, offers plenty of meme-worthy denial. But I've said enough. These memes do a terrific job of illustrating how pointless (and dangerous) it is to ignore climate change.

These memes are pretty funny, but don't be fooled: Climate change is real, and it is an urgent issue. But people really like looking at cats on the Internet, so maybe this will convince them that we have to fight for our planet.

More like this
Prince William Condemns “Unacceptable” Comments Made To A Black Guest At Buckingham Palace
By Shahed Ezaydi
All The Most Stylish Winter Wardrobe Staples You Can Buy On Walmart.com
By Jessie Quinn
10 Organizations To Support On Latinx Women's Equal Pay Day
By Caroline Burke and Mia Mercado
Meet The Rugby World Cup Breakout Star Making The Sport More Inclusive
By Shahed Ezaydi
Get Even More From Bustle — Sign Up For The Newsletter