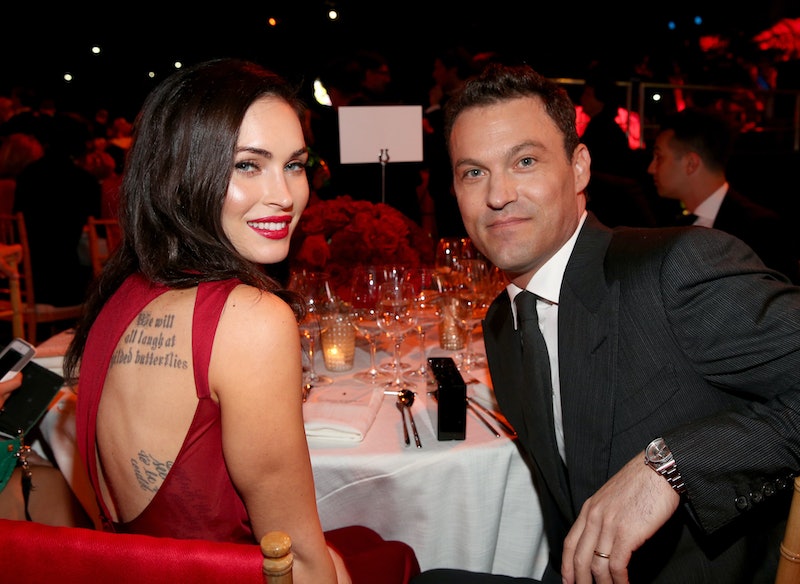 Well, the summer of 2015 has been a brutal one for celebrity couples. You can blame it on the heat or Mercury in retrograde, but many long-time couples are on the outs. Us Weekly reports that Megan Fox and Brian Austin Green have split after 11 year together. And with that, 2015 claims another victim. This was a couple I actually thought would go the distance because they seemed to stay away from the public eye and remained very private about their relationship, which always bodes well in Hollywood. But alas, things aren't sounding so good, which leads me to wonder: Why did Megan Fox and Brian Austin Green break up?

Bustle has reached out to Fox and Green's reps for comment, but has not yet heard back.

The couple has not been pictured together in public since they were spotted in Beverly Hills on June 9, and at an appearance in August, Fox was seen not wearing her wedding band. A source told Us Weekly of the alleged split, "Megan has separated from Brian... They decided on it six months ago.” The only details mentioned by the source for the reason of the split was the mysterious, "things have been rocky."

It could be that their 13-year age difference was an issue. In February 2009, Fox told Us after ending their three-year engagement, “Marriage isn’t a realistic goal for someone who is 23.” A year later in June 2010, the couple was wed in Hawaii. Sure, they worked things out and had two beautiful children together — Noah, 2, and Bodhi, 18 months — but when it comes down to it, Fox was always a lot younger than Green.

Another problem could have to do with their careers. According a source who spoke with the Daily Mail , "They fight about her career... She was obsessed with getting roles." Oh, wow. What a travesty! A woman who wants to work! Could it be that Green was a little jealous of Fox's career, especially since she's been away filming the Teenage Mutant Ninja Turtles sequel?

Back in August 2014, Fox seemed to hint at some signs of trouble in paradise while she was on her promo tour for the first TMNT movie. The actress shared with Entertainment Tonight some details of their love life and, well, it didn't sound that passionate. She said, "Brian doesn't get any intimacy whatsoever." Not long after that, she told the ladies of The View , "My [2-year-old son Noah] sleeps in bed with us, so there's really no way." She also added that Green says he wants another kid because "he doesn't have to do any of the work! He says he wants another one. I'm not against it. I'm not opposed to it." I don't want to jump to conclusions, but the fact that she was so flippant with discussing their relationship (including important issues like intimacy and children) may have held more meaning than people realized at the time.

As of right now, the couple has yet to comment on the reports of their split, but I hope that they can get through this smoothly and remain the great friends that they have been for over a decade.