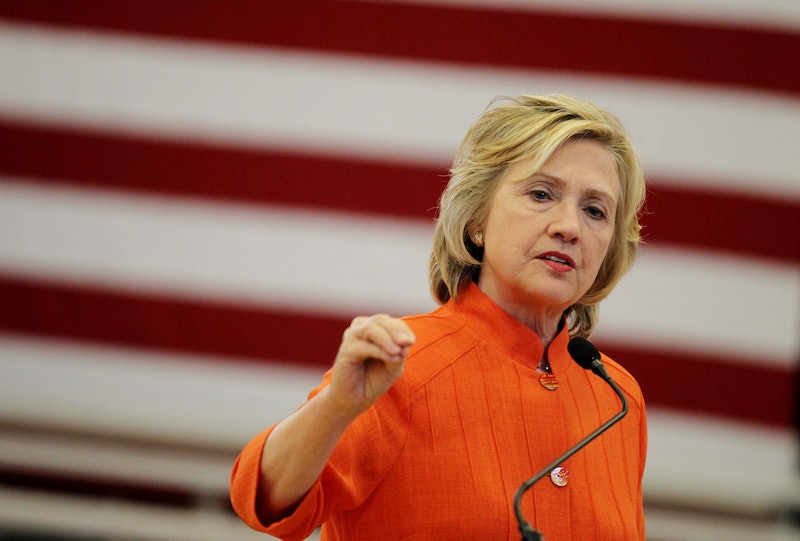 Last week, Hillary Clinton met in private with five activists from Black Lives Matter to discuss how to tackle racism in America. In a video of the slightly tense conversation obtained by GOOD Magazine, the representatives from Boston's Black Lives Matter group explained why racial inequalities and mass incarceration need to be addressed by presidential candidates, and asked Clinton about laws enacted by her husband that they believe allowed "white supremacist violence against communities of color" to continue. The presidential hopeful didn't agree that the Violent Crime Control and Law Enforcement Act and other Clinton administration laws were racist, though she conceded that they weren't exactly successful. Clinton then offered some advice for the Black Lives Matter movement going forward.

In the video of the interaction released on Monday, Clinton tells the activists that in order to see real change, they need to have specific plans and goals, because just talking about the problem doesn't fix anything. She says: "But you’re gonna have to come together as a movement and say 'Here’s what we want done about it.' Because you can get lip service from as many white people as you can pack into Yankee Stadium and a million more like it who are gonna say, 'Oh, we get it! We get it! We’re gonna be nicer.' That’s not enough — at least not in my book."

When Julius Jones told Clinton that the Black Lives Matter movement needs to change white hearts, she advised him that that's the wrong tactic: "No, look. I don’t believe you change hearts. I believe you change laws, you change allocation of resources, you change the way systems operate. You're not going to change every heart. You're not. But at the end of the day, we could do a whole lot to change some hearts and change some systems and create more opportunities for people who deserve to have them, to live up to their own God-given potential."

Clinton's point was that making more white Americans morally opposed to racial discrimination wouldn't necessarily rid the country of the institutionalized racism that leads to mass incarceration and less overall opportunities for black Americans. She thinks that if all the movement does is change people's hearts, America will be in the same situation a decade from now: "You know, you can keep the movement going which you have started, and through it, you may actually change some hearts. But if that’s all that happens, we’ll be back here in 10 years having the same conversation."

The meeting's intention wasn't for Clinton to give the activists advice on how to run their movement, but she disagreed with some of their methods, and wasn't afraid to tell them. Although the meeting had some rough patches, both groups ended the talk on a good note. Clinton parted with, "Well, I’m ready to do my part in any way that I can. Thank you."