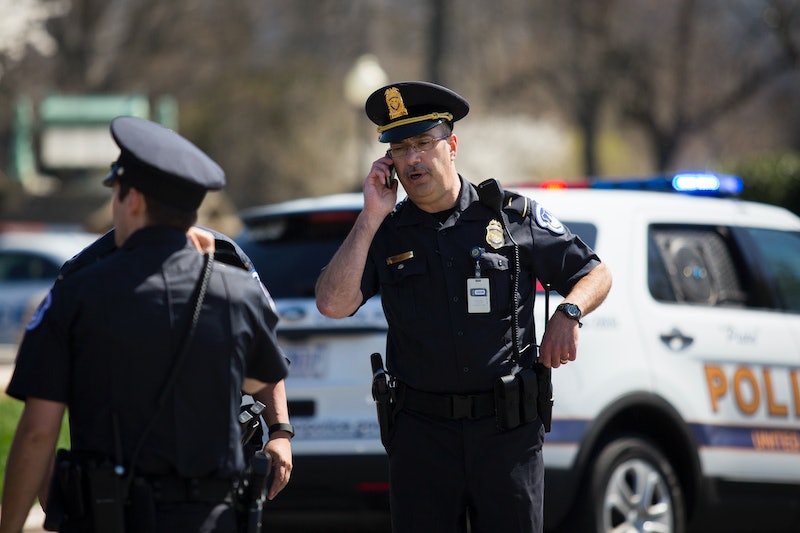 A former Virginia cop has been indicted on murder charges for shooting John Geer, an unarmed man, in the doorway of his own home in August 2013. According to at least four officers on the scene at the time, Adam Torres fired a single shot without warning at 46-year-old Geer as he stood in his front doorway with his hands up. Torres has in the past claimed that the victim made a sudden move for his belt, which prompted him to fire in self-defense. A special grand jury decided to charge Torres with second-degree murder for his involvement in Geer’s death on Monday, following almost two years of delay and obstruction by the Fairfax County police department.

While Geer was white, his death has since been subsumed into a national conversation around egregious instances of police brutality, for which few officers ever are held accountable. Torres’ indictment — the first time that an officer in Fairfax County has ever faced a criminal charge for shooting someone while on duty — is a win for activists seeking to curtail police aggression.

“Justice is prevailing,” Geer’s father, Don Geer, said to The Washington Post after Torres’ indictment. “I figured it was going to eventually happen. It’s unfortunate we had to wait so long for it to take place. But our judicial system is going through its process, and we will see justice served.”

On Aug. 29, 2013, Torres was one of two officers who first responded to a house call when Maura Harrington reported that Geer, her partner, was throwing her things out of their house into the yard. When the officers arrived, Geer showed them a holstered gun and threatened to use it if the police used theirs. Officer Rodney Barnes, a trained mediator, arrived shortly afterwards to try to talk Geer out of the house. Geer soon put the gun down and never picked it up again during the encounter.

Forty minutes of tense standoff ensued, with Geer refusing to leave the house because he knew then he would most likely be subject to arrest. He kept his hands in the air when he was talking to the officers, at one point asking Torres to lower his weapon. Geer reportedly said, "I don’t want to die today."

According to Barnes and officers on the scene of the shooting, Torres fired a single shot at Geer in the doorway, without provocation. Geer tumbled backwards through the door, and the officers — not sure whether he was dead, or alive and armed — waited 70 minutes for a SWAT team to arrive and move into the house. They then found Geer dead inside.

“When the shot happened, his hands were up,” Barnes said to the investigators. “I’m not here to throw [Torres] under the bus or anything like that, but I didn’t see what he saw.” Torres, in turn, claimed to investigators that Geer reached for his belt as if to draw a weapon. “It was not accidental,” Torres told the detectives investigating the incident. “No, it was justified. I have no doubt about that at all. I don’t feel sorry for shooting the guy at all.”

After the shooting, Torres was placed on administrative duty, and remained an active member of the force until July 31 of this year, after an internal investigation recommended that he be let go. The Fairfax County police department did little to make public its investigations into the incident. As The Post notes, the department refused to release Torres’ internal file, and did not make his name public as the officer responsible for Geer’s death until January of this year.

Protests erupted around the lack of accountability in Geer’s death, and the incident has subjected the Fairfax County police department to close scrutiny over how it investigates officer-related deaths during arrests and stops. The Geer family has long been pressing for answers about the death. In April, they and Harrington, Geer’s longtime partner, settled a wrongful death suit with Fairfax County for $2.95 million to avoid years of litigation.

But even with this win, Geer’s father told Washington D.C. TV news outlet WTOP that they were going to push to bring Torres before a grand jury: “Torres, the shooter, is still on the payroll. There’s been no charges made. There’s no question in anybody’s mind that he’s guilty of an unlawful shooting.”

In December 2014, a judge ordered the department to make public its investigation and evidence around the shooting, and Fairfax County dumped nearly 1,000 pages of documents into the public domain on Super Bowl weekend. The documents demonstrated that witnesses on the scene, including Torres’ fellow officers, did not see Geer reach for his belt or lower his hands before Torres fired.

What is perhaps more indicative of contemporary trends in American police departments is not Geer’s death, but the long, drawn-out campaign to bring Torres before the justice that followed. As The Post reported in April, an investigation conducted in conjunction with Bowling Green State University found that only 54 officers faced criminal indictments for killing people on duty over the past decade, out of thousands of potential cases.

Stinson added in an email, “Juries are very reluctant to second-guess the split-second decisions of police officers to deploy deadly force.” Torres’ case, then, is the exception that seems to prove the rule.