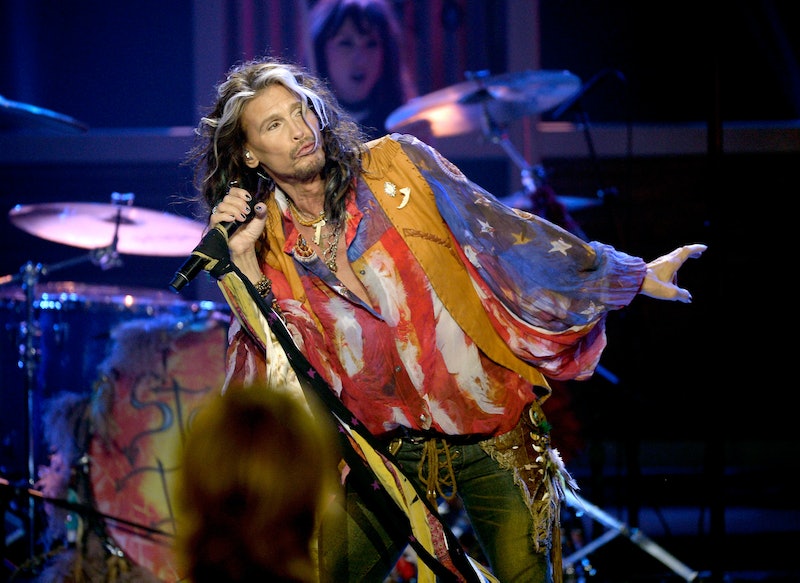 The country music world is about to get a major shakeup! Steven Tyler will guest star on Nashville and he just shared a behind-the-scenes look from the set along with new mother Hayden Panettiere. "@haydenpanettier and I getting a little 'crazy' on set at @Nashville_ABC You wont want to miss this......#patsycline," he tweeted, with the hashtag referencing the film role of Panettiere's character, Juliette Barnes.

Unfortunately, we don't know too many details about Tyler's Season 4 appearance, although PEOPLE officially confirmed he'll be guest starring. While other singers, like Christina Aguilera, played fictional characters on the show, it's possible Tyler could be making a cameo as himself. He's known for his amazing personal style and in the photo, he looks like he could be wearing his own clothes. Considering that Tyler is holding a microphone, it's safe to say that he'll be playing a singer and possibly even performing at some point.

This is the perfect fit for Tyler, who is making a country album. (He already released the first single, "Love Is Your Name"!) While his years in the music industry will help him bridge this new genre, I definitely think that the Nashville characters can still teach him a few lessons about the country music world. Check out seven things Tyler can learn from Nashville below.

1. It's Worth It To Put Everything On The Line

Please refer to Rayna James starting her own label.

Nothing tugs at the heartstrings like one of Gunnar's ballads.

3. It's Good To Surprise People

No one pulls a publicity stunt like Juliette Barnes.

5. Stay True To Yourself

One of the most important storylines is Will Lexington's struggle to come to terms with his sexuality.

6. Your Fellow Musicians Will Have Your Back

They watch out for each other.

From Juliette's pop-infused country to Gunnar's stripped-down songs, there's something for everyone.