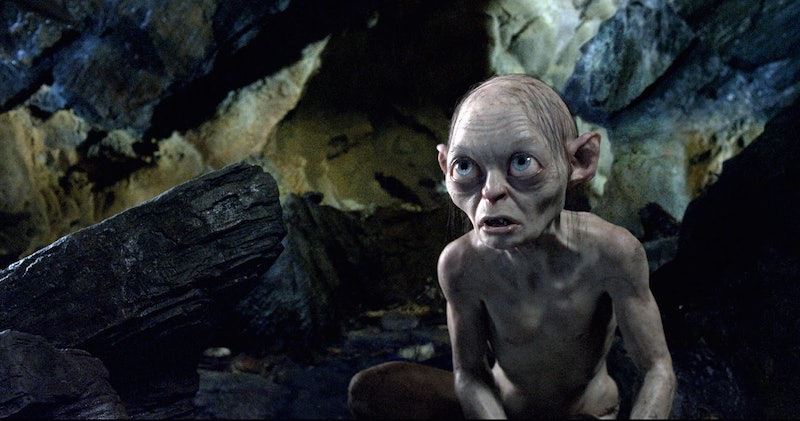 Someone once told me that Peter Jackson has the set of Bag End from The Lord of the Rings movies in his New Zealand home. They also said the set has been transformed into a laser tag arena. Now, who knows what — if any — part of this fantastical story is true, but if it is, we can assume that Peter Jackson is one badass individual. His films certainly prove that he is a beyond capable filmmaker, and his latest venture, The Hobbit: The Desolation of Smaug (Dec. 13), appears to be the greatest showcase of his talents yet. However, even the best and brightest in Hollywood face challenges when it comes to adapting works originally intended to be read. The first Hobbit installment was a gorgeous occasion, ripe with dreamy set pieces and presented in glorious 48-frames-per-second, but even it had it's inconsistencies. And the guys (gals?) behind your favorite remixed trailers (Twilight, Superman) has adapted the first Hobbit film into a hilarious and oh-so-accurate "honest" trailer. Below, see the 10 most truthful revelations (we were all secretly thinking) from the trailer:

1. Why was a 300-page children's book split up into THREE movies?

The trailer narrates, "Forget the days of good standalone movies, and settle in for a three hour long prologue..."

2. The Hobbit was shot in New Zealand, i.e. green screens

3. The never-before-seen frame rate actually made viewers throw up and pass out

When the narrator says, "filmed in such high definition, it made audiences want to hurl," he isn't kidding. The 48-frames-per-second gave viewers across the globe headaches and migraines.

4. It "tricks you into thinking it's Lord of the Rings"

The trailer points out that The Hobbit includes four major characters from Lord of the Rings that weren't included in The Hobbit books. Peter Jackson himself even said they added Galadriel so a woman could appear in the film.

5. How the hell do you pronounce Smaug?

The trailer pokes fun at the hilarious nature in which the characters in the film attempt to say the evil dragon Smaug's name. Even the narrator struggles to pronounce it without stuttering.

6. The Dwarves are all basically the same character

"Meet 13 interchangable dwarves," says the narrator, who attempts to introduce each of them, and eventually gives up, exclaiming, "Skip. Next..."

The narrator describes Bilbo as, "a random unprepared hobbit who steals from the mentally handicapped (Gollum)."

8. The entire movie is basically dwarves singing and "wandering around"

What is this movie about, again?

9. There is No Ending

"Instead of Return of the King's eight different endings, watch a movie that doesn't even have one," says the narrator, addressing audience's comments that the last Lord of the Rings movie seemed to never end.

Watch the full "honest" trailer in all of it's glory: