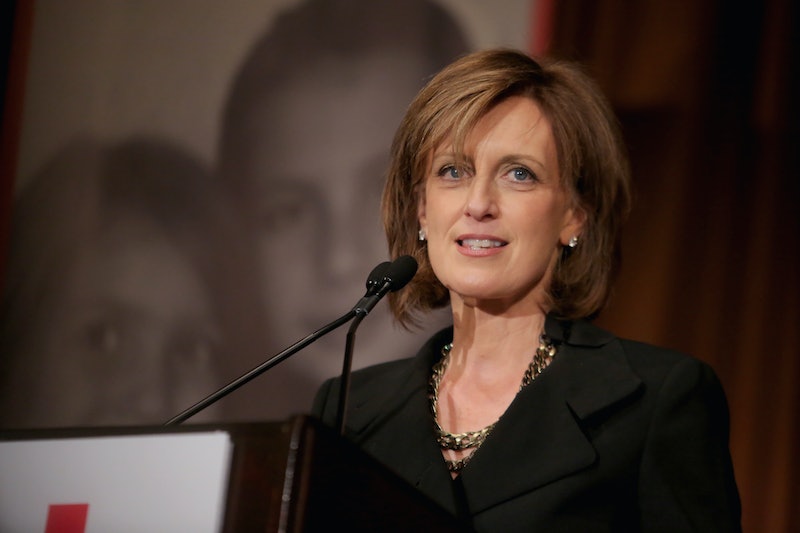 It's nearly the end of the year, and in terms of pop culture, we all know that means lists: Best TV Shows, Favorite Movie Quotes, Celebrities Who Just Need to Go Away — you get the gist. Most of these rankings are light-hearted and fun, meant purely for the entertainment of their readers. However, there are a couple of lists that deserve your attention more than the rest — like The Hollywood Reporter's 2013 edition of their annual ranking of the most powerful women in in the entertainment industry, which was just released on Wednesday.

The entire list is worth scanning, as it's an impressive mix of famous faces (Jennifer Lawrence, Ellen DeGeneres, Taylor Swift) and behind-the-scenes champions (Lucasfilm's Kathleen Kennedy, Scandal mastermind Shonda Rhimes, American Hustle producer Megan Ellison). Yet it's the top five women on the list that we're most interested in, seeing how much it seems each woman has contributed to other women over the past twelve months.

Whether they produced hit female-focused TV shows or were responsible for greenlighting movies made by women, the top five women on the list certainly had an impact this year. Let's take a look at what each woman accomplished over the past twelve months:

Sweeney is the co-chairman of Disney Media Networks and president of Disney/ABC Television Group, which, together, generates more profit than any female-run empire. She's the force behind Marvel's deal with Netflix, the preschool channel Disney Junior, and Jimmy Kimmel's 11:35 p.m. Live spot, among countless other things.

ABC's female-fronted show may have premiered last year, but it became a worldwide sensation in 2013, largely due to star Kerry Washington and mastermind Shonda Rhimes. Scandal has garnered praise for its commitment to diversity and feminist characters.

Hammer is the Chairman of NBCUniversal, meaning she runs half a dozen channels you love, including E!, USA, and Bravo. Over half of NBC's profit this year will come from networks overseen by Hammer.

While not as popular as The Tonight Show or The Colbert Report, Chelsea Lately does have the distinction of being 2013's only late night talk show hosted by a woman. Thanks to host Chelsea Handler's wit and Bonnie Hammer's supervision, Chelsea Lately is breaking barriers for women, episode after episode.

Dubuc is the President and CEO of the A&E Networks. She controls A&E, History, and Lifetime, among other networks, and all-together will bring in $3.7 billion in revenue for her company this year.

Call Me Crazy: A Five Film

Lifetime may be more known for its crappy reality shows and middling TV movies, but occasionally, it produces something actually worth watching — like April's Call Me Crazy: A Five Film, a short-film collection about the realities of mental illness. While heavy-handed at times, the movie was notable for its female-centric cast and feminist plotlines.

Pascal is the Co-Chairman of Sony Pictures. While Sony faced setbacks this year with box office bombs (remember After Earth?) and budget cuts, it also had some tremendous successes: Captain Phillips, American Hustle, and, on Sony TV, Breaking Bad and The Blacklist.

Like all major movie studios, Sony made its share of boys-club films this year (This is the End, White House Down), but it also produced two films made by and starring women: Carrie and The To-Do List. Both movies faced their share of critics, but the fact that each one was a female-centric film directed by a woman was far more important.

Walden is the Chairman of 20th Century Fox Television. In 2013, she produced 44 TV series, including Homeland and Modern Family. Walden also oversaw the revival of Arrested Development, the expected relaunch of 24, and an HBO pilot currently in the works.

20th Century Fox Television produced several female-friendly shows this year, including Glee and New Girl, but American Horror Story is particularly notable for its feminist characters and plotlines. This season featured a nearly all-female cast, and storylines that covered everything from sex positivity to the complicated relationships between mothers and daughters. When so many TV shows don't even come near passing the Bechdel Test, the feminism of AHS: Coven is refreshing and necessary.

More like this
Colin Firth Revealed His Favourite Mr. Darcy (& No, It's Not Himself)
By Sophie McEvoy
'Doctor Who’s New Star Is Already Huge On TikTok
By Maxine Harrison
What’s New On Netflix: A Victoria Justice Rom-Com & The Return Of David Letterman
By Arya Roshanian
Shocked Fans & Former Co-Stars React To Ray Liotta’s Death At 67
By Grace Wehniainen
Get Even More From Bustle — Sign Up For The Newsletter