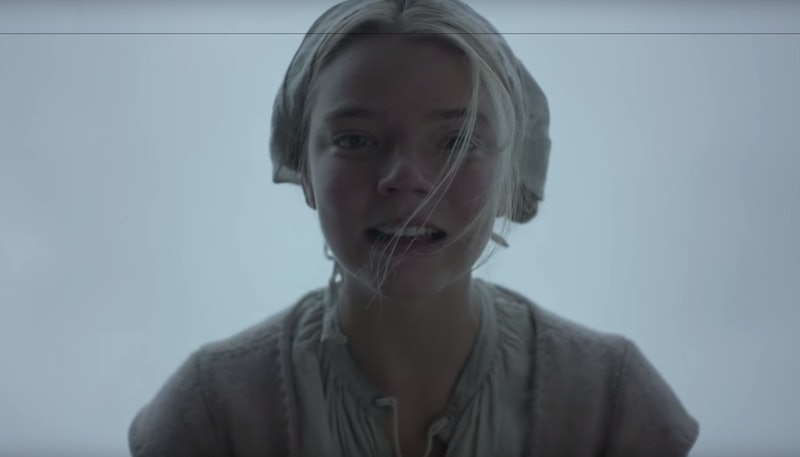 It's the middle of August, which means it's basically September, which means it's about five minutes until Halloween. If you like to start your spooky season way early like me, here's a hump day treat (or trick) from A24: a trailer for Robert Eggers' The Witch , which was a Sundance favorite and is absolutely terrifying. Like, so much so, it actually had me screaming out loud. (So, of course, I watched it TWICE.) The Witch won Eggers the Best Director prize at Sundance, and the plot pretty terrifying even in words: Basically, an early 1600s Puritan family moves to the countryside in New England to seek quiet, familial peace — but oops, the woods they live next to seem to be full of witches, and then their children start disappearing. It happens, I guess.

Naturally, they then accuse their blonde daughter of being a witch, as that's the most logical explanation. If you need any more proof than that about the creepiness of this film, David Erlich from Time Out New York called it "one of the most genuinely unnerving horror films in recent memory" — and, just based off the two and a half minute trailer, I would say that yeah, he's probably right.

Who's This Creepy Lady?

As soon as you see this woman in the first seconds of the trailer, you know that she's gonna bring some evil. Those eyes are just not the eyes of a benevolent woman.

Playing peekaboo with your baby is super fun... until you open your eyes and your baby isn't there anymore.

Talk About A Forbidden Forest

The little boy from the family goes into the woods, discovers this dwelling — which is never a good sign — and even worse, it looks like someone is home. GET OUT OF THERE, BRO.

There are so many blood-chilling goats in this trailer. Part of me feels personally victimized by this trailer for ruining goats for me. GOATS ARE NOT SUPPOSED TO DO THAT.

There are lots of children with empty eyes skipping and smiling and singing in this movie. I'm sure you know that's a sign of guaranteed evil.

Welp, one thing is for sure after watching The Witch trailer: I am never having children. They're just too potentially terrifying.