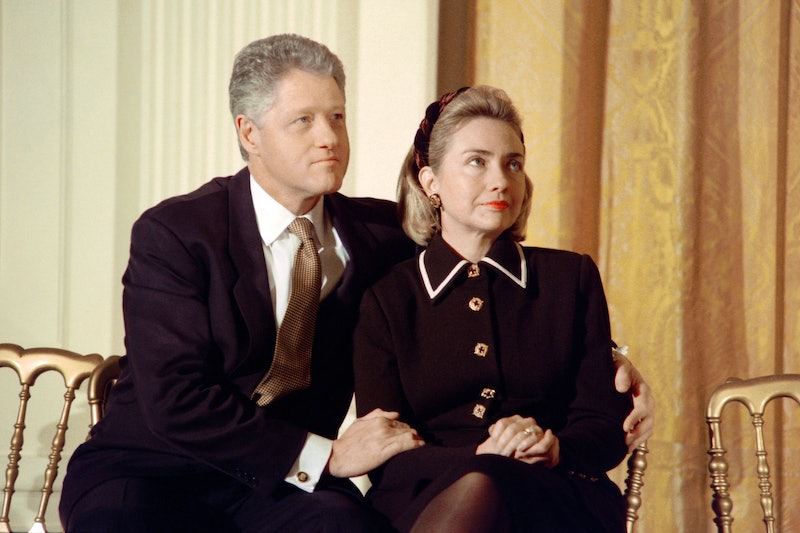 In case you missed it, Wednesday was former President Bill Clinton's birthday, and Hillary spent the day sending him well wishes in the most adorable ways possible. In between campaigning for the presidency, Clinton took to social media and shared an adorable vintage picture of the former president, as well as a Snapchat story for the ages.

The Snapchat story contained six photos of the former president, along with cute (and emoji-filled) comments. The first, which was just a picture of a young Bill, said, "Happy Birthday Bill Clinton!" The next, a picture of their wedding day, read "a loving husband." After that, a photo of the Clintons holding baby Chelsea read "a doting dad." Zoom forward a few years, and the next photo featured current-day Hillary and Bill, with the caption, "a proud grandfather." About this time, it likely occurred to Clinton to mention that he had once been president, and snapped a picture of his presidential portrait and said, "42nd POTUS."

But while those five pictures were adorable, nothing could compare to the final picture in the story. The last one featured the most '90s thing you could ever dream up: Bill Clinton in a black turtleneck posing in front of a backdrop while playing his saxophone. The caption read, "... and a master saxophonist!"

In addition, Hillary Clinton shared a sweet picture of herself and Bill on Twitter and Instagram, saying "double tap to wish this guy a happy birthday!" as well as on Facebook with the caption "happy birthday to this guy." With the possible exception of the family picture at Disney World which graces Clinton's 404 page, this might be the cutest picture to be used during the campaign so far.

As a big fan of both Clintons, and an even bigger fan of Bill Clinton saxophone jokes, it's exciting to see the spotlight turned back on the 42nd president momentarily. And as stoked as I am for a possible Hillary presidency, I'm also super pumped for the prospect of Bill Clinton becoming the first male first lady. Will he be called "first gentleman"? "First man"? What will his philanthropic duties be? Will his inauguration outfit be donated to the Smithsonian's First Ladies exhibit? (Okay, maybe I'm the only one asking the last one.) But the former president's laid-back personality and great sense of humor make it difficult to not get excited about the possibility of him returning to the White House as the First Dude (my preferred suggestion for his title).

According to People, Bill Clinton celebrated his 69th birthday in the East Hamptons, surrounded by friends and family (and also apparently Bon Jovi), while his wife took a brief break from the campaign trail. And the former first lady wasn't the only one who took to social media to surprise Bill Clinton. His daughter Chelsea organized a card on behalf of the Clinton Foundation, and encouraged Twitter users to sign and share personal messages. Various other politicians have Tweeted out birthday messages as well. Aside from Hillary Clinton, however, the cutest birthday message by far came from President Obama.

Happy birthday Mr. (former) President! Maybe he'll get to celebrate the next few back in the White House. I hope he brings his saxophone.