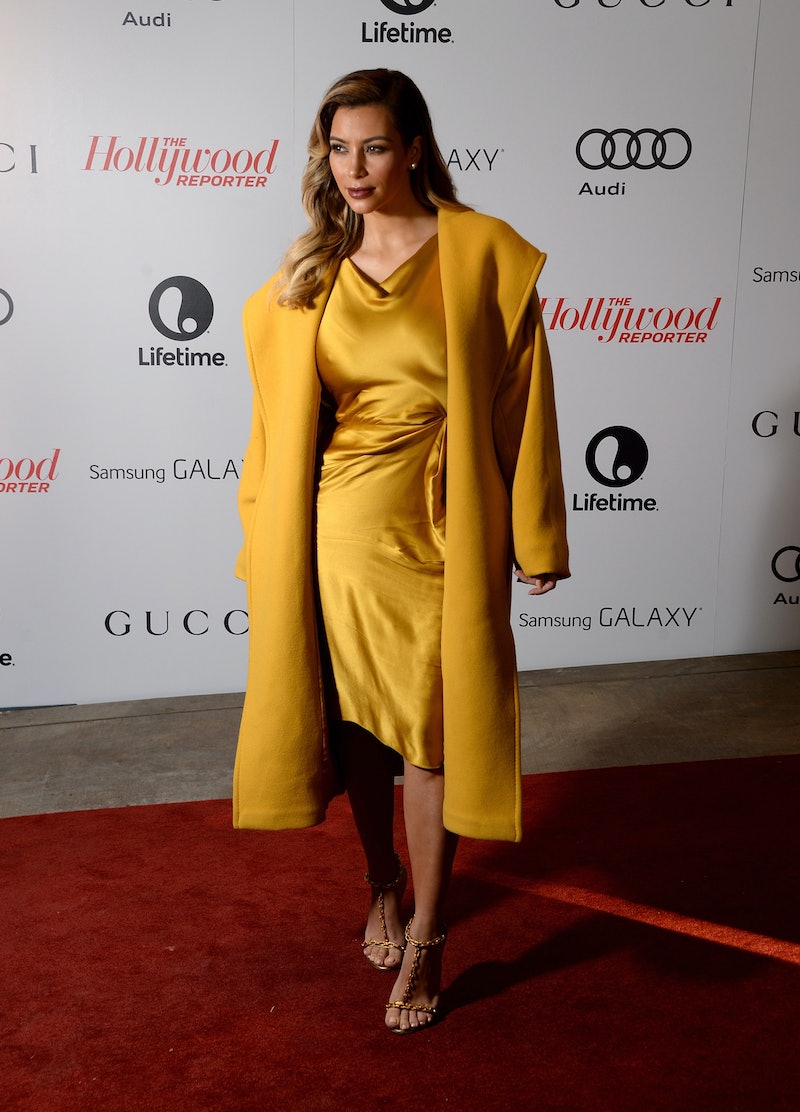 No one said that being a celebrity was easy. Kim Kardashian gave birth to her daughter North West only six months ago, but that didn't stop the meanest of the body snarkers from attacking the new mom's post-baby body. But it seems that Kim Kardashian's post-baby body (ugh, that phrase) may have the last laugh after all. Kim, the Queen of the Selfie, showed off her recently slimmed-down body in a white bikini for this week's issue of Us Weekly.

Not surprisingly, Kim looks super hot. A white bikini is hard for basically anyone to pull off — let alone someone who gave birth a mere six months ago. Kim has clearly been hitting the gym and working hard to get her body back into shape, which is great for her.

Though Kim isn't my favorite celebrity under the sun, even I was appalled by the intensity of the body snarking that people threw at the Kardashian sister both during and after her pregnancy — I mean, come on, people — but the fact that she is now being applauded for losing the weight and looking this good is only enforcing the notion that she really shouldn't have "let herself go" during pregnancy. And she's now pandering to the press.

This new body reveal only serves to say that she too thought she had to get her pre-pregnancy look back, and fast. I know revenge can be sweet, but if she'd only taken a moment before posting that ass-out selfie and giving this Us Weekly interview to ask herself if this was really the right approach, things could have been different. In fact, had she refused to play into the negative covers with this "positive" one, it would've spoken volumes about her strength. Instead, she's coming across as a pawn in the magazine's big game: tear her down only to build her back up.

While this article may congratulate Kim for all of her hard work in losing the baby weight (no gimmicks! no surgery!) there are about many others that criticized her baby weight. Here are some of the most appalling.

There's a lot of things I already hate about this article, including the inclusion of Kim's exact weight and height (where they got these facts, I have no idea).

Girl, if I were pregnant, you could not keep me away from the waffle fries. Gotta love the fact that being 200 pounds is "nightmare worthy" in this context.

At first I assumed that this was applauding Kim for not letting the haters get to her. But no, it was just another slam at Kim Kardashian's 200 pound nightmare.

Waaaaay to kick her when she's back up, Life & Style.

There's no winning her for Kim. After being mercilessly mocked for her natural weight gain, it's easy to see why she'd want to prove everyone wrong, but it's a shame that she played a part in the continuation of this vicious cycle: she's fat! she's thin! she's cheating! she's fat again! she's too thin! she's going under the knife!, etc. It's a shame for her, and for us.