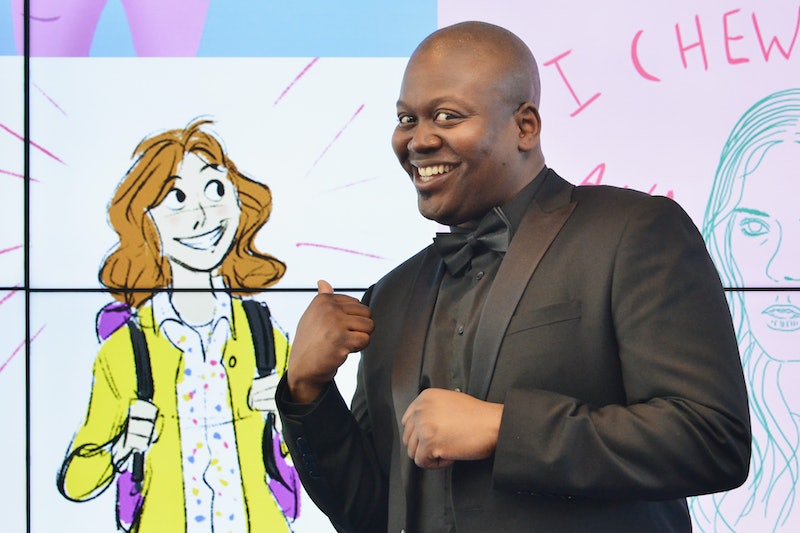 Emmy season is in full swing, and there is one race I feel particularly invested in: Best Supporting Actor in a Comedy. It used to basically be a "Who's your favorite person on Modern Family?" race, but a newcomer has made it particularly interesting. In a move that I couldn't be more happy about, half of the nominees are men of color! Nominated alongside Modern Family's Ty Burrell, Girls' Adam Driver, and Veep's Tony Hale, are Brooklyn Nine-Nine's Andre Braugher, Key and Peele's Keegan-Michael Key, and my personal favorite, Unbreakable Kimmy Schmidt's Tituss Burgess — who, let's be real, should just be given the Emmy right now.

Burgess is such a talented actor that, after wowing both Tina Fey and audiences with his short role as D'Fwan on 30 Rock, Fey and her partner Robert Carlock built a character around him for their next project, which became Kimmy Schmidt. You can tell that the part, as The New York Times explains, was built specifically for him — not only because he shares a first name with his character, Titus Andromedon, but because it uses all of his many talents, and the connection between actor and character just feels so real. Here are the reasons why he should be honored with the statuette.

Even His Subtle Movements Are Hilarious

He can crack you up just by widening his eyes.

He Made A Kooky Character Relatable

There's not a person in the world who hasn't felt this way.

He Went All In With Physical Comedy

He Has Broadway Pedigree

He starred on Broadway in a few shows, including The Little Mermaid and Guys and Dolls— so, it would be exciting to see Hollywood honor the Great White Way.

His Singing Alone Should Get All the Awards

He Delivered Some Potent, Important Points Amidst The Comedy

A hilarious moment that makes you think.

The Emmys Should Compensate For Snubbing Ellie Kemper

Kimmy Schmidt herself of Unbreakable Kimmy Schmidt wasn't nominated! At least give this show some recognition, guys.

His Speech Would Be Amazing

Come on, Emmy producers! It's all about putting on a good show! Plus, he deserves it!

Females are strong as hell — and so is my love for Tituss Burgess.