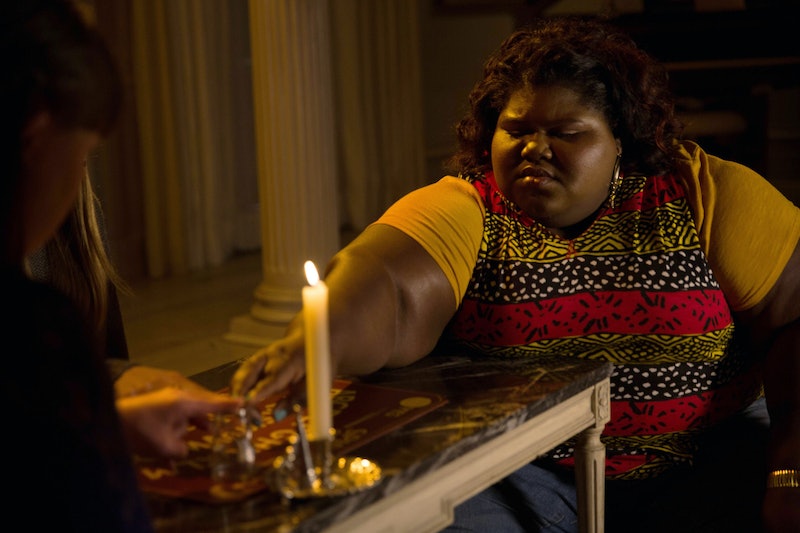 By now, it's clear that American Horror Story: Coven is a huge fan of bringing folks back from the dead. Madison got her throat slit and now she's alive enough to have three-way monster sex with Kyle and Zoe. Misty Day came back from the ashes to regenerate everyone she comes across, including Myrtle, who's used her second life to gouge out her enemies' eyes. Spalding is sort of alive — at the very least, he's a ghost with some seriously unghostly privileges. But in the mid-season finale, we saw three deaths that might — for once — be totally permanent.

In the very final moments of "Heads," an episode that saw Myrtle remove the eyes from the remaining council members with a melon baller without killing them (yet) and Fiona taking mercy on Kyle and making him the coven's own "attack dog" some true violence rang out. When Patti LuPone's Joan had finally come around to see the good in Nan and witchcraft, she snaps at the mention of her murdering her husband and smothers her son Luke. In tandem, Cordelia's conflicted witch hunter of a husband finally finds a way to prove he's telling her the truth: he storms voodoo headquarters after Marie LaVeau orders him to kill all of the witches and slays everyone he sees. The only two left living and wounded are Marie and Queenie, and in the final moments of the episode, Queenie puts a gun in her mouth and uses her human voodoo qualities to transfer the effects to Hank.

From the looks of things, these three people are dead — while LaVeau is wounded — but if the past tells us anything, not everyone in this slaughter is gone forever. As such, we're about to take a look at everyone's chances of living on to see the final four episodes of Coven.

There are two avenues of hope with Luke. First is the fact that we only saw Joan raise the pillow. There is still the possibility that a nurse catches her in the act, that Luke wakes up, or (least likely, considering how she offed her husband) that she has a change of heart.

The second avenue involves Misty Day, as boring as that may be. Nan will be inconsolable if Luke is dead and she'll either channel that into ferocity as she and the other witches protect themselves or she'll break down. If Luke's death fuels her transformation into a more powerful witch, it would serve the plot better for him to stay dead. But if Nan's distracted by the fact that Misty has brought back half of the house's inhabitants, she may not take "no" for an answer.

No matter the result, the effect will likely remain the same: making Nan angry, more assertive, and most importantly, more powerful. (How else is she supposed to rise up and fulfill our Nan is the Supreme theory?)

Face it, dude's a goner. He did have a nice, scruffy beard situation going on, but he had to go. With his brains blown all over Marie's salon, there's little hope for the Frankenstein-style regeneration that Kyle enjoyed and that's if Cordelia could find it in her recently hardened heart to forgive him. Unlikely, to say the least.

Then there's the notion that Hank's death is necessary to move the story along. If he is alive, he's already tried to convince the Delphi that he's a he-man witch-killing machine. They'll come in eventually to correct his wrongs, but with him alive, that would take time. Now that he's dead, they'll have to swoop in more swiftly, meaning that Marie and Fiona have to solidify their partnership ASAP, despite years of rivalry. And watching Angela Bassett and Jessica Lange navigate this partnership of convenience being hastened by circumstance while still lying on a bedrock of hatred is going to be some very satisfying television.

The fate of everyone's favorite human voodoo doll is the tough question, because it asks to try to guess the rules surrounding her powers. She can recover from acid burns and stabbing — non-fatal wounds — and she doesn't often appear to feel pain from these acts. She's not yet stabbed herself in the heart or even cut off a vital limb, so it's uncertain whether or not acts that are fatal to either Queenie or various body parts are permanent.

Of course, even if she somehow didn't die from the gunshot through some voodoo doll rule we're not aware of, her fate still doesn't seem all that promising. Before she shot herself, she sustained a pretty significant gunshot wound in her stomach — she was likely already dying when she took Hank's life. And the fact that Marie shows up at Fiona's without Queenie suggests that this may be the end of the road for the character and the fantastic actress who plays her, Gabourey Sidibe.

More like this
The 'PLL: Original Sin' Creators Say A’s Identity Will Be “Very Clear” By The Season Finale
By Alyssa Lapid
Netflix Just Revealed When 'Never Have I Ever' Seasons 3 Will Premiere
By Gretchen Smail and Alyssa Lapid
‘The White Lotus’ Is Coming Back For Season 2 This Fall
By Bustle Editors
'The Capture' Is Finally Back – & S2 Looks Tense AF
By Sophie McEvoy and El Hunt
Get Even More From Bustle — Sign Up For The Newsletter