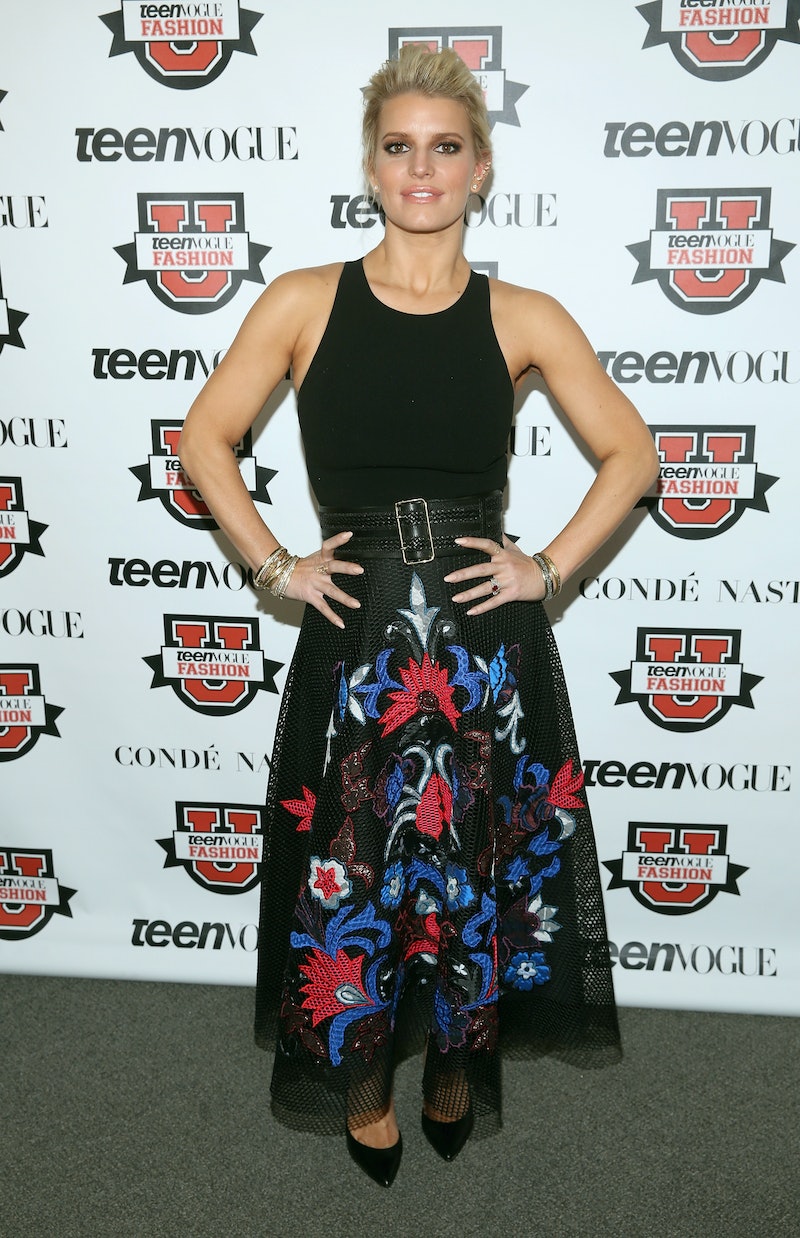 Congrats are in order to our favorite "I Wanna Love You Forever" songstress. Jessica Simpson's fashion line is celebrating its 10th anniversary! Over the last ten years, Jessica Simpson has evolved her brand from a simple junior's line at Macy's named after a celebrity to a full-out fashion conglomerate, selling everything from fragrances and footwear to eyewear and home goods. And Jessica Simpson's $1 billion company doesn't appear to be slowing down anytime soon, especially now that they've announced that they will be releasing a line of activewear, followed by a line of baby clothes. Aside from just straight up growth, it's safe to say that Jessica Simpson's line has changed a lot over the last 10 years.

“We’ve all sort of been growing up with her. As [Jessica's] gotten older, her lifestyle has changed and she’s recognized the categories that are important for her to be in," Martine Reardon, the chief marketing officer of Macy's Inc. told WWD . "It shows how she’s really rounded out her assortment.”

And much like Simpson's line has evolved over the years, Simpson's personal style has changed dramatically over the last 10 years. From her Daisy Duke phase (both the shorts and the character) to the motherhood chic style she's rocking now, Simpson has had quite the style evolution since 2005.

This is what Jessica Simpson wore to the premiere of the Dukes of Hazzard in the summer of '05. I describe this phase of her life as her "bombshell" phase, because she had a rockin' bod from the movie and no qualms about showing it off.

Simpson's divorce from Nick Lachey was finalized in 2006, so I think she was still trying to figure out her single style at this point. It was kind of all over the board, but that's pretty much what it was like dressing in the mid-2000s. It was a rough time for fashion.

This was back when Simpson was dating John Mayer, so her style went a little dark and sexy. She rocked that brown hair like no other.

In 2008, Simpson started going back to her Texan roots, opting for a more country, girl-next-door style.

This is the year the media was mean to our girl, but since she DGAF, she often flaunted her body in form-fitting dresses and sequins, because why shouldn't she? People are jerks—she looked great.

In 2010, Simpson is starting to get her fashion footing. Well-fitted blazers, unique tops, and skinny jeans became her staples.

Simpson's maternity style can be summed up in a few words: dresses, black jackets, and animal print. She spent the nine months she was pregnant showing off her baby bump in with form-fitting dresses in attention grabbing patterns.

Jessica Simpson managed to wear flare jeans in 2012, and no one gave her any flack for it. Quite the skill, if you ask me. (She was obviously just a couple years ahead of the game since flares are all the rage now.) Her post-baby style was a little flower child, but still evolving from her country days.

She's pregnant again! In 2013, Simpson stuck with similar maternity attire (form-fitting dresses, black jackets) but opted for maxi lengths, since they were one of the biggest trends of 2013.

The bombshell is back! Aside from her lack of curls and the fact that this dress is black, this sexy dress is eerily similar to the blue one she wore back in 2005 for the Dukes of Hazzard premiere. Killing it.

Today, Jessica Simpson's style is chic and put together. She is definitely poised to take her $1 billion fashion company to the next level. You go, girl.