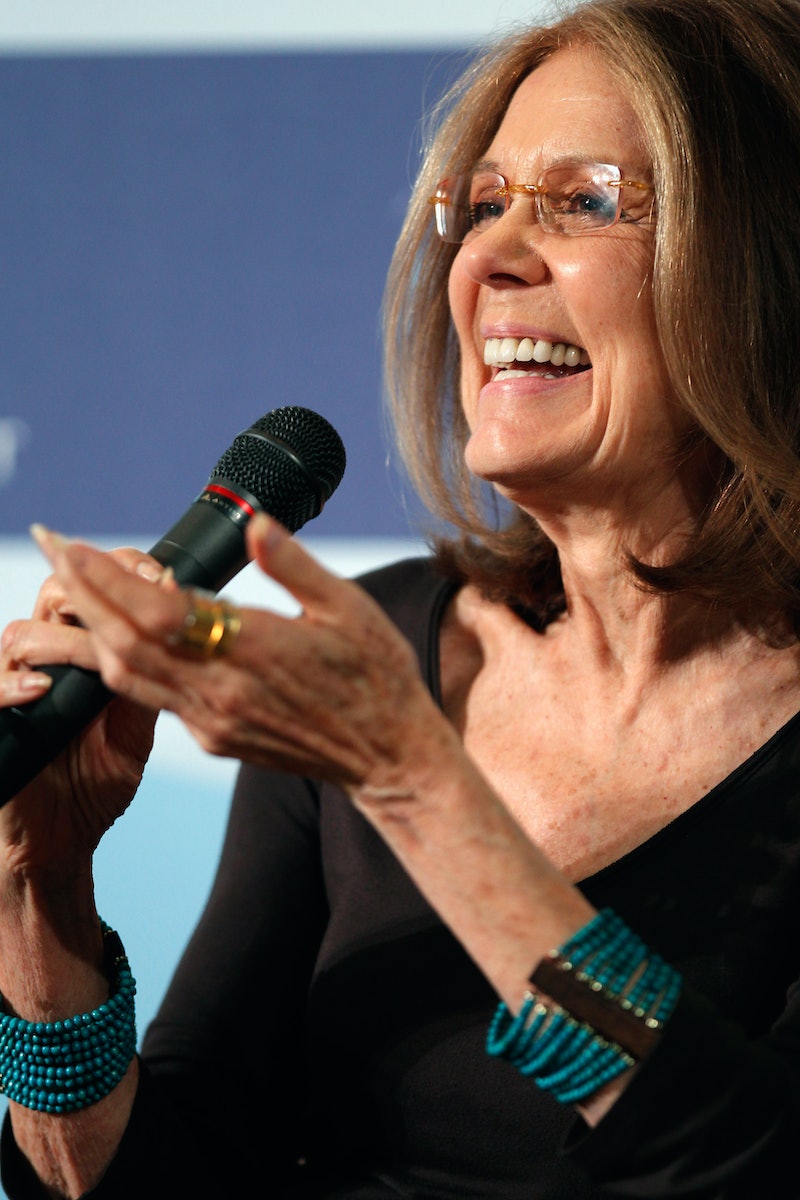 It is a truth universally acknowledged that every female journalist needs an awesome female role model. OK, maybe I just made that up, but there is definitely some truth to it, and having a role model in your desired field is important. Among my long list of historical and professional crushes are several formidable journalists. In high school, I had a brief but embarrassing time period when I had pictures of Carl Bernstein and Edward Murrow in my bedroom. I knew I wanted to be a female journalist, but until I hit college I never had a female reporter who I really looked up to.

I dreamed of being Rory Gilmore, but I didn't have my Christiane Amanpour. Which frankly, is a real shame. There are so many women out there who have broken through the glass ceiling and forged the way so that women like myself can exist and flourish. It's hard enough to be a woman in journalism, and we owe it to the women who came before us to celebrate their achievements and recognize their work.

We owe it to the girls who are coming up behind us as well, to make sure that these incredible women are remembered. In today's society, female journalists are a badly represented Hollywood trope: often selfish, single-minded, and unethical in their pursuits of a story. The female reporters on Netflix's House Of Cards alone, with their often amoral approach of using sex to score a scoop, could probably set the entire profession back a generation. So forget about the fictional Zoe Barnes, and focus instead on these amazing women.

Even if you take away everything she did for women journalists, Ida B. Wells was an amazing woman. Born into slavery in 1862, Wells eventually became a prominent journalist who headed the Chicago Conservator, the city's first black press. Not only was she a formidable journalist, but Wells was an active participant in the early civil rights movement. She was particularly outspoken against lynching, writing articles, columns, and books against the practice. Even after a previous newspaper, the Memphis Free Speech, was destroyed by an angry mob, Wells refused to stop writing and working for her cause.

It never ceases to amaze me that somehow people don't know about Dorothy Thompson. Once called "the first lady of journalism," TIME magazine named Thompson the second most influential American woman, after First Lady Eleanor Roosevelt. Thompson was the head of the New York Evening Post's Berlin bureau and covered the rise of Hitler and the Nazi Party. In 1931, she even interviewed Hitler — and was not exactly favorable in her review. Where others couched opinions, Thompson was unrelenting in her opposition against Hitler and his platforms. As WWII began, Thompson took a job at NBC as a radio broadcaster and worked as a war correspondent. And if that didn't already make her cool, Thompson was an avid advocate for women's suffrage and was also briefly married to writer Sinclair Lewis.

Here's a timely reminder that journalism encompasses more than just typing up events. Margaret Bourke-White was a pioneering female photojournalist, who was one of the first staff photographers for LIFE magazine. One of her images actually appeared on the magazine's first cover ever in 1936. During her career, Bourke-White photographed the rise of industrial Soviet Russia, worked as one of the first female war correspondents in World War II, and spent months documenting apartheid in South Africa. Much of her work was focused on showing the effects of industrialization, and focusing on human subjects to cover stories that otherwise went unnoticed.

Ethel L. Payne is, hands down, one of my favorite journalists ever. Often called "The First Lady Of the Black Press," Payne covered some of the most important moments in our recent history. She was on the forefront of the civil rights movement, reporting on the Montgomery bus boycott as well as the 1963 March on Washington. She never shied away from asking the tough questions and worked tirelessly to bring civil rights issues into a national discussion, shedding light on stories the white press corps avoided covering. In 1972, she became the first African American female newscaster on a national network when she was hired by CBS. During her career, she covered every president from Dwight Eisenhower to Ronald Reagan.

How could any list of influential female journalists exclude Gloria Steinem? I guess I could be biased, considering that I'm a big fan of Ms. Magazine, which Steinem founded in 1971. But even before that, Steinem was working as a writer and women's rights activist. Steinem is a feminist icon, continuously covering difficult stories and bringing female narratives to the forefront. In 1972, Steinem became the first woman to speak at the National Press Club. She later expanded beyond journalism and became involved in a variety of projects, from writing screenplays to co-founding the Women's Media Center. For female journalists and feminists alike, Steinem is a role model, and her work is on the must-read list.

Rory may have Christiane Amanpour, but I have Joan Didion. Didion was one of the pioneers of "new journalism," a technique that combines the lyricism of literature with the research of journalism. Like millions of women across the world, I have read and re-read Didion's books The White Album and Slouching Towards Bethlehem. Her essays and articles focused on the untold story of American subculture, reflected on culture at large and greatly shaped the stories of the 1960s and 1970s. And while Didion's writing and achievements are enough to make her a role model, she's also just extremely cool. She's an icon, and she's utterly unaware and unfazed by her status. Even if you'd rather be a field reporter instead of an essay writer, give Didion's works a go. There are worse women to look up to.

More like this
16 Novels That Paint A Realistic Portrait Of Abortion
By K.W. Colyard
Police Never Found Enough Evidence To Charge Sharon Marshall’s Killer
By Brad Witter
Yes, You Can Stream Machine Gun Kelly’s Life In Pink In The UK
By Rachel Mantock
Disney+ Has a Nature Docuseries Narrated By Michael B. Jordan
By BDG Studios
Get Even More From Bustle — Sign Up For The Newsletter