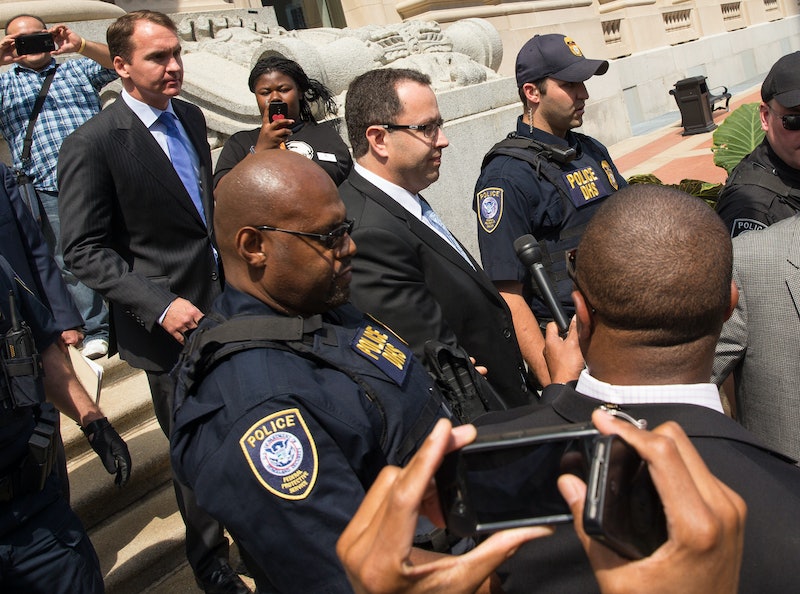 On Wednesday, authorities announced that Subway's pitchman admitted to having sex with and obtaining pornography of minors, and according to court documents, Jared Fogle will pay $1.4 million to 14 victims in restitution and spend at least five years in prison as part of his plea agreement. Fogle reportedly admitted to having sex with two minors, age 16 and 17, as well as possessing pornographic material of 12 other children, some as young as 6 years old. If Fogle pays the full restitution, each victim will receive approximately $100,000.

Subway dropped Fogle as a spokesman last month, following a federal investigation of his friend and colleague Russell Taylor, who worked as executive director of Fogle's charitable organization for obese children, the Jared Foundation. In July, Fogle's home was raided as part of an investigation involving Taylor's possession of child pornography. According to authorities, Fogle asked Taylor to obtain pornography for him.

As part of the deal, which prosecutors are calling "groundbreaking," Fogle will pay $1.4 million in restitution to his victims and will face anywhere from five to 12 and one-half years in prison. In addition, he will pay a $500,000 fine. According to The Huffington Post, Fogle's plea deal is the largest amount of monetary restitution ever ordered for a child pornography or sex trafficking case in the Southern District of Indiana.

Restitution in regards to child pornography or sex trafficking cases is not a new concept, and Fogle's payment may be the largest in Indiana, but it's not the largest ever ordered. There is no clear process for determining how much money is owed to a victim, but the intent is to cover the full amount of any loss the victim incurred as a result. This means the money will go toward covering medical services, counseling, therapy, rehabilitation, or any legal fees.

In Fogle's case, each child will receive $100,000 to cover their expenses. While identities of the victims or their situations aren't known, the circumstances surrounding a young child who was secretly filmed by Taylor in his home may be very different from those of the girls who engaged in sexual acts with Fogle. In short, the two victims' costs and needs are not likely the same.

But, as U.S. federal judge Paul Cassell told The Huffington Post, at least victims in this situation can be guaranteed of receiving the full amount of their restitution, something many other can't be sure of. Though Fogle's full net worth is unknown, it is estimated to be close to $15 million, and the proceeds of the Jared Foundation totaled $520,000 between 2009 and 2013, according to CNN.

The largest restitution to ever be ordered was in 2009, when a Florida court charged Arthur Staples with paying $3.68 million. Staples, who reportedly had $2 million in savings, was found guilty of trafficking child pornography, and ended up only paying $1.2 million to the victim.

More recently, the 5th Circuit Court ordered Doyle Paroline of Texas to pay $3.4 million in damages after he was found guilty of having two photographs of the victim in his possession. But Paroline took the case to the Supreme Court, and in the 2014 case Paroline v. United States, the court threw out the restitution order. Though it did not challenge the legality of restitution, the court ordered the payments must fit the scale of the offense. Under this ruling, though the victim was owed the right to the full $3.4 million, the court did not believe that one individual should be held accountable for paying anything beyond his own actions.

As a result, the process of determining and receiving child pornography restitution is difficult, unreliable, and confusing. But a federal bill, called the Amy and Vicky Child Pornography Restitution Improvement Act, would seek to clarify and improve the process. Named after two victims of child pornography trafficking, the bill would see that those found guilty would either have to pay the full amount of the victim's losses or would pay a minimum depending on their crime.

Under this bill, which is currently waiting to be voted on in the House, restitution would amount to at least $250,000 for production, $150,000 for distribution, and $25,000 for possession. Using these figures, Fogle's plea deal may not only be reasonable, but far more judicious. But once again, the process for calculating restitution relies on the estimated needs of each individual victim.

It's unknown how prosecutors came up with the $1.4 million sum, or what factors were calculated. And though it's not the largest to be ordered, it is unique in that it will likely be settled quickly, and guaranteed. And it may set a precedent for further cases going forward. Though Fogle can easily sustain the loss, others may not, and if The Amy and Vicky bill is passed and enacted, it will see a clear reform to restitution cases, to ensure that victims at least receive some form of repayment for their loss.