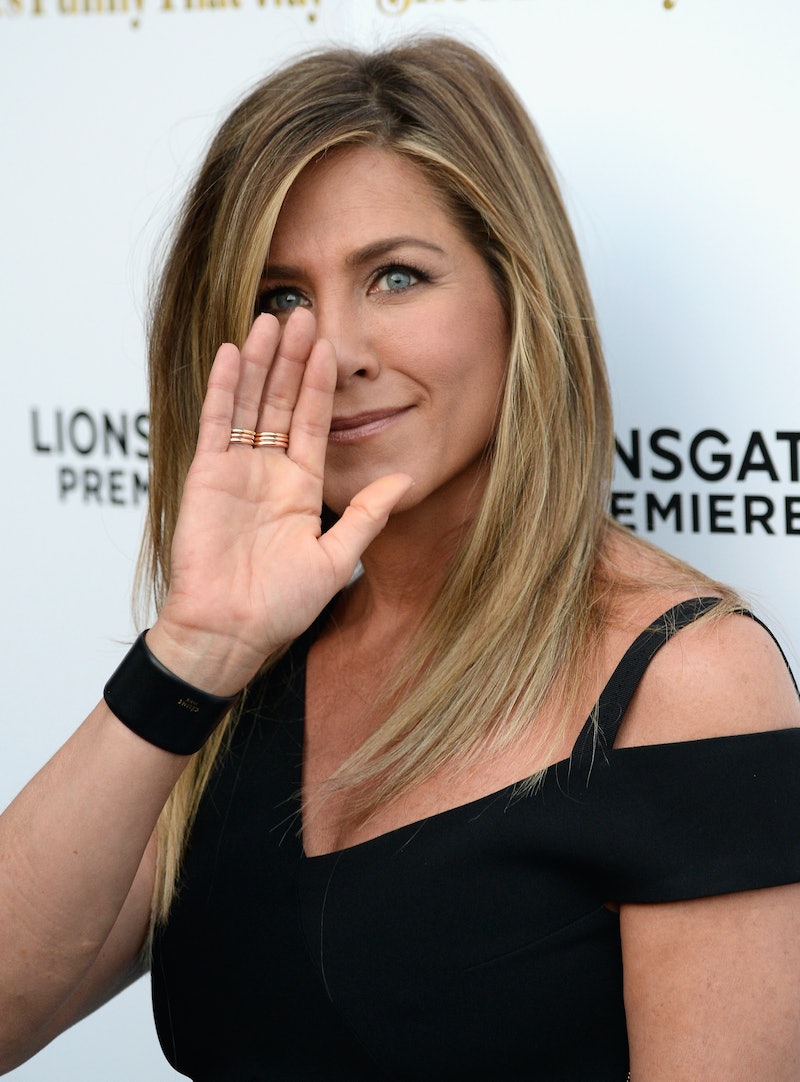 Sometimes a woman has to get back to work right after her wedding and honeymoon without missing a beat. Jennifer Aniston wore a black jumpsuit with her new wedding ring in her first red carpet appearance since marrying Justin Theroux. Although Jen and Justin are always in style and in synch, Aniston rolled solo this time out, beautifully so.

The presentation was vintage Aniston: a golden blowout, tanned skin, and a classic black outfit. The wedding ring? Well, the gold band, paired with a stack of gilded bangles on her wrist, was semi-new!

Remember, she hasn't worn one since splitting with ex-hubby Brad Pitt in 2005, which caused me to doubt the existence of true love in Hollywood. It also likely caused massive deforestation, thanks to all the print media coverage of their breakup, but that's a whole other story.

Aniston was promoting her new film She's Funny That Way. She is known for wearing all-black at events such as this and she didn't disappoint in her Roland Mouret jumpsuit.

The sun-kissed Aniston even joked to E! that her glow came from sweat, as opposed to soaking up the sun on her honeymoon!

You can count on Aniston to play somewhat coy about her personal life and to be consistent with her red carpet choices. She doesn't often do jumpsuits, but she nails the look when she does. Pantsuits and jumpsuits are so in right now, as Selena Gomez demonstrated.

The top was off the shoulder on one side and had a strap.

The top felt a bit asymmetrical, which I liked.

The bangles. The clutch. THE RING!!!

Check out her gold and black, Wonder Woman-ish cuff... and her ring... again!

From the side, the width of the jumpsuit's legs made it look like a dress.

Aniston is slim yet the volume of her jumpsuit didn't overtake her. She still came across as elegant.

She always appears confident and comfortable in her beloved black.

While everyone is most interested in her wedding ring, her two-finger ring was pretty edgy. She went with gold and rose gold accessories against her black one-piece.

From the back! She really does have the best hair in Hollywood, IMO.

The silhouette looked like a column dress from this vantage point.

But alas! It was a jumpsuit and pants.

Once more from the side. It was anything but a basic black outfit. Pft! As if. There were lots of little visual surprises, like the gold side zipper, due to the construction.

Here's a previous Aniston jumpsuit in her favorite color.

She wore a satin-y pantsuit with wide legs, a cropped jacket, and lots of gold accessories a few years back.

J. Aniston is an ambassador for the color black. I also liked her high pony here.

The actress also wore this maroon pantsuit with a deep V and no bra. The shape was similar to the one above, right? It was a sexy take on menswear, Aniston-style.

While Aniston might be criticized as "basic" or for playing it safe with her repeated reliance on black for red carpet ensembles, I positively celebrate her for it. She is always chic and put together.