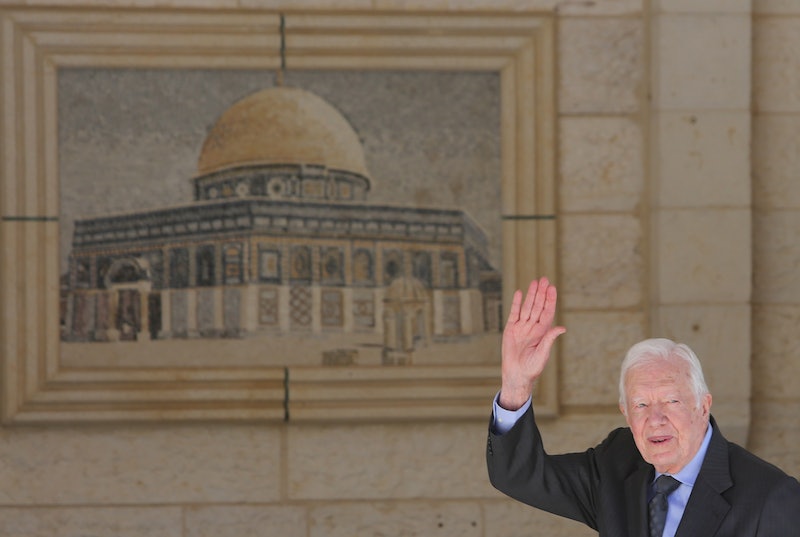 Former President Jimmy Carter held a press conference at the Carter Center Thursday to discuss his recent cancer diagnosis. Doctors removed cancer from his liver in early August, and then found what Carter said was melanoma in "four small spots" in his brain, according to The New York Times. But Carter, who is turning 91 in October, didn't seem at all upset about the diagnosis. He joked with reporters about how Hillary and Bill Clinton and Secretary of State John Kerry called him for the first time in a long time. When reporters asked him how he felt upon learning the diagnosis, he said he was "surprisingly at ease." Carter's inspiring and positive outlook on his diagnosis should outweigh any sensational "It's brain cancer!" headlines.

Carter smiled at reporters and spoke slowly during the press conference. "I've had a wonderful life," Carter said during the conference, according to the National Journal. "I have got thousands of friends and I have had an exciting and adventurous and gratifying existence, so I was surprisingly at ease," he said. "Much more so than my wife was. But now I feel, you know, it's in the hands of God and my worship and I'll be prepared for it when it comes. ... I'm ready for anything."

Carter said that he will cut back "dramatically" on his obligations at his nonprofit, the Carter Center, which works on disease eradication and peacekeeping efforts in high-conflict areas around the world. Carter said his grandson, Jason, will take over as chairman of the organization.

Carter said he will begin radiation treatments this afternoon, which will be delivered four times with three week intervals in between. He said there's a chance the cancer could spread even further to other parts of his body, but that's not the part of his announcement that Carter wanted people to dwell on. Rather, he just wanted to let people know that he is feeling just fine and prepared for whatever might come next. Carter said he dealt with cancer when his two sisters, his brother, and his father all died from pancreatic cancer, and that he understands the risks. But despite having such immediate and widespread ties to cancer in his family, Carter still told a reporter that his advice to other cancer patients would be to remain hopeful.

With a smile on his face, Carter spoke with conviction when he told people that he was "looking forward to a new adventure," according to Mashable.