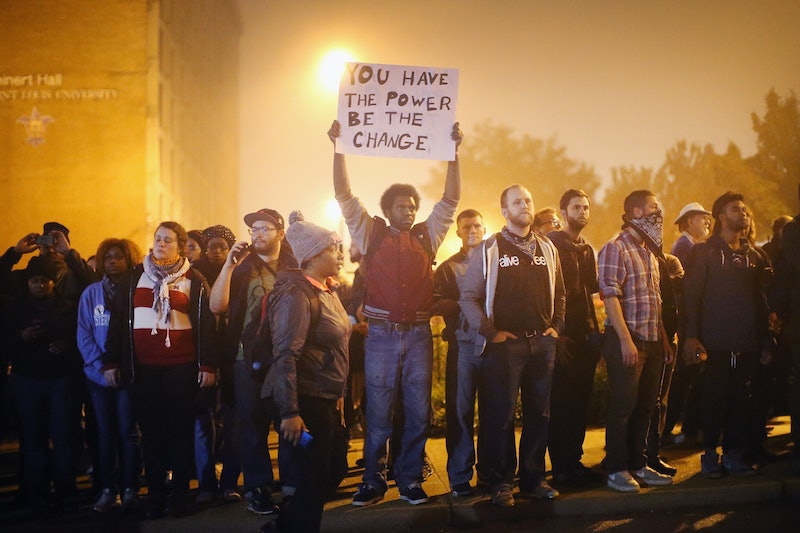 On Wednesday, protests broke out in St. Louis, Missouri in the wake of the death of 18-year-old Mansur Ball-Bey. Ball-Bey, a young black man, was shot and killed by police on Wednesday, after he and another man allegedly fled the scene of a police search. Police fatally shot Ball-Bey after he allegedly pulled out a firearm and pointed it at them. Tensions were already running high in the St. Louis area, as residents have continued to stage protests in recent weeks to commemorate the one-year anniversary of the police shooting of Michael Brown. So who was Mansur Ball-Bey?

After he was killed on Wednesday, Ball-Bey's name started trending on social media, with words of anger and loss from his family and friends. According to statements made on Twitter, Ball-Bey was known to those close to him as "Man Man." He was also a recent graduate of McCluer South Berkeley High School in Ferguson. Myriad photos of Ball-Bey at his high school graduation ceremony and in social activities have surfaced, depicting a happy and social teenager who enjoyed spending time with his friends.

Ball-Bey's family has insisted that this was a case of being in the wrong place at the wrong time, and that he was not a criminal. Ball-Bey's cousin DeAndre Cody told New York Daily News that "Man Man was very respectful. We can't imagine him pulling a gun on an officer. He's never conducted himself like that and he was raised better than that."

The police search that ultimately led to the confrontation with Ball-Bey was in a home which they had obtained a warrant to search. Police stated that they found four guns (including the firearm Ball-Bey allegedly aimed at officers) and crack cocaine. Ball-Bey and a companion subsequently fled. That companion escaped, and has only been identified as a black male in his late teens. Police are still searching for him. A man and a woman who were occupying the home for which the search warrant had been issued were both arrested.

NBC News reported that word of Ball-Bey's death prompted a protest which drew around 150 people, at least nine of whom were arrested. Ball-Bey's family has yet to release a formal statement, and Cody has stated that the family is still waiting to hear facts about the shooting from the police. Police are withholding further comment about the search and Ball-Bey's shooting until more evidence becomes available.

More like this
The Families Of Grenfell Tower Are Still Waiting For Justice, Five Years On
By Bustle UK
Yinka Bokinni Recalls Terrifying Truth At Heart Of 'How To Hire A Hitman'
By Frances Stewart
How To Support Gun Control Reform Right Now
By Morgan Brinlee and Carolyn Steber
5 Concrete Ways To Take Action Against The Rwanda Deportation Plan
By Rachel Mantock
Get Even More From Bustle — Sign Up For The Newsletter