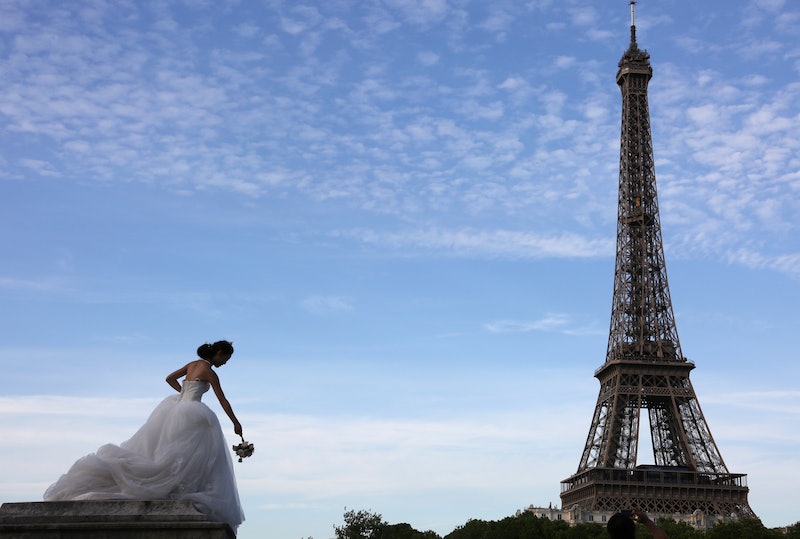 The titles we assign women — from Miss to Ms. to Mrs. — have long defined us, whether we like it or not. The box you tick on a form or even the way you sign your name often speaks volumes about your age and marital status. As for men? They're "Misters" pretty much from the start, and are never expected to change that. Why is that, though? Well, in a new episode of the YouTube series Stuff Mom Never Told You, host Cristen Conger investigates the original meaning of Mrs. — and prepare to have your mind blown, because once upon a time, it had nothing to do with marriage at all.

It's common knowledge that cultures with native English speakers have been using the terms Miss and Mrs. to decipher which women are married or single for the last century or so. But you may not have thought of it like this: According to Conger, "The reason we have these two titles isn't so much to brand married women as taken, but brand single ladies as available." As you can imagine, that whole methodology is pretty sexist, considering men aren't required to have their marital status attached to their names (or basically, stapled to their foreheads) for the world to see.

But according to Conger, that very sexist double standard is what led to the creation of the neutral term "Ms.," which was advocated for by second-wave feminists, and caused a sizable movement to use this term for all women, regardless of their relationship status. (Just take a look at your junk mail if you want to see an example; I'm guessing almost all of the letters are addressed to you using the term Ms.) That said, I've personally found that if people know you're married, they will call you by Mrs., while if hypothetical person doesn't know your marital status or knows you aren't hitched, they'll call you Ms.

As it turns out, Miss, Mrs., and Mr. didn't actually have quite the same meanings attached to them until the mid-1700s. Back then, it was all about social status. "Originally, all of these designated Masters and Mistresses were wealthy enough to have servants," Conger explains.

And as for the distinction between Miss and Mrs.? In the Colonial era, it all came down to age. A Miss was defined as a woman under 18, who upon reaching this milestone, instantly turned into a Mrs. (Yep, married or not.) The only catch was if said woman was a sex worker. In that case, they remained a Miss for life, no matter how old they were.

This actually makes total sense, when you learn that once-upon-a-time a similar distinction actually did exist for men, too. Get this: It turns out that the term Master was actually used for boys until they were about seven or eight, and then no title was given to them until they officially became adults at 18. Only at that point did they turned into Misters, just how women turned into Mrs.

Conger says it wasn't until the 1750's rolled around that the terms "Miss" and "Mrs." started to evolve and change. That's when unmarried upperclass women began to designate themselves "Miss," while "Mrs." began to refer to a business woman, rather than a wife. In the 1900s, this upperclass tradition began to work its way down into the other classes, and the terms took on the meanings we now know them to have.

Pretty fascinating, huh? You can watch the full video below to learn more about the story behind the terms, and how they came to be.