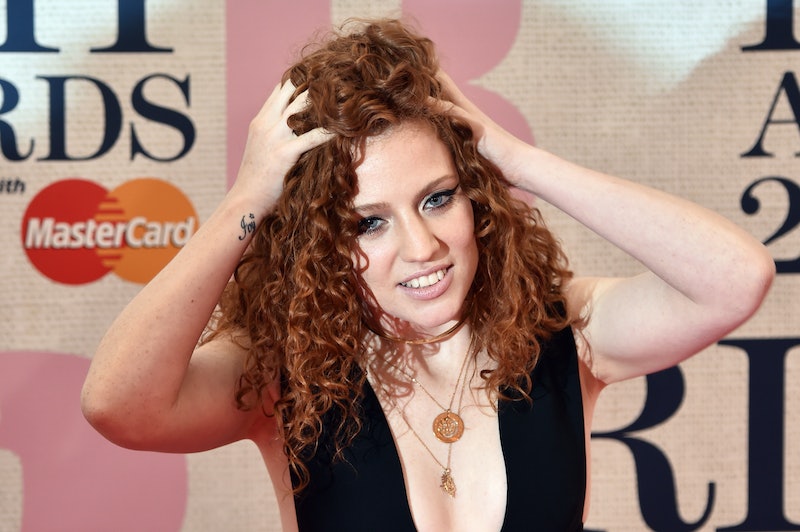 If you're not already familiar with Jess Glynne by name, then you surely already know and love her voice. She's the soulful singer behind the hit song "Rather Be," and her vocal chops don't stop there. At only 25 years old, she's already had an incredible six top 10 singles — three solo tracks and three songs on which she was a featured artist — and she's even won a Grammy. Not too shabby for a singer whose first album hasn't even been released yet. Now, with Glynne's debut album I Cry When I Laugh finally hitting stores this September, she's ready to take over not only her native UK, but the rest of the world, too. "I’m finally officially going out there with my own stuff, putting myself out there," Glynne says to Bustle. "I'm as ready as ever — it’s wicked."

"Rather Be" has only started to gain traction in the America over the past few months, and, while having your music be so well-received is every artist's dream, it must be strange for Glynne, who experienced the same level of success with the track half a year earlier back home. "I remember sitting in the car in LA and it coming on the radio," she recalls. "This was, like, I don’t know, six months after the UK success. It was just the most insane feeling, especially because it had been really successful in the UK, but it was much later." The track, a collaboration with Clean Bandit, rose to No. 1 back home and hit No. 6 on the Billboard Hot 100 — an amazing feat for relatively unknown artists.

This isn't an entirely unique situation, of course — the U.S. often gets music much later, but, when it does, American audiences wholeheartedly embrace artists from across the pond. "It’s really strange, the way it works! It’s taking its time. It’s like adaptation — everything takes time for change. The music industry’s constantly evolving and that’s what’s so exciting at the moment, and that’s why I’m so excited to be here. The song’s picking up really well and the reactions I’ve got since ‘Rather Be’... it’s so warming. With Sam Smith’s success and Adele and Amy [Winehouse], it’s so exciting to see. It’s not often and it doesn’t always work, but it is working at the moment."

Something tells me it'll continue to work with Glynne, especially considering the fact that I Cry When I Laugh is such a solid collection of tracks that display not only the breadth of the singer's talents, but her varied influences as well. Even for those who are familiar with her radio hits, the album will bring the unexpected to the table and really get to the heart of who she is as an artist and a human being. Drawing on her love for the likes of Amy Winehouse, Sam Cooke, and Aretha Franklin, among others, Glynne has aimed to make an album that will make her fans really feel something deep and meaningful.

"A lot of it is what you haven’t seen. It’s very soulful, very real. I’m inspired by live music and voices, so a lot of songs are about the voice, the music and the feel," she explains. "My favorite song ever is ‘I’ll Take You There’ by the Staple Singers. It’s a jam and the thing I love about it — and the reason it’s my favorite song — is that it’s just a feel. It’s a jam you can just get in, and that’s what I was obsessed with growing up, songs that had soul and made me feel like I wanted to just sing and move and skank my face. That’s the kind of music I wanted to make. So when It came to putting the album together and making these songs, those are the moments I tried to get into, and that’s what people won’t be expecting."

With an album title like I Cry When I Laugh, it seems obvious that there's more to Glynne than what we see on the surface. With her wild curls and thick winged eyeliner, she comes off as a tough girl, a badass who won't take crap from anyone. And she is that, but she's also so much more; the title of the album is a reflection of the tough times she went through to get to where she is.

"So, I cry when I laugh — literally. I can’t help it. It streams and it’s always happened — it’s a fact and everyone in my life knows it. I wanted to call my album this for a while, a few years. I liked it because it was a fact about me and it felt real. As I put that album together, I just felt like it fitted so well," she reveals. "The album’s a story about me over the past few years and my experiences, where I’ve been and what I’ve been through. It’s an album about getting to know me, the first introductory album. It’s really fitting because I signed my deal in a state of heartbreak and lowness. I was going through a really hard time but an amazing time at the same time and it was really hard. I was signing a record contract but going home and bursting into tears because that’s what I was going through."

Make no mistake, though — I Cry When I Laugh is anything but sad. In fact, Glynne was overwhelmed by the chance to live her dream, so, while she may have been working through a broken heart while recording the songs, it's certainly not a heartbreak album. "Yeah, I’ve been through sh*t, but everyone’s been through sh*t," she says. "For me, it was more about writing an album that has those moments, and it does, but it’s more about seeing the hopeful side and seeing the light at the other end of the tunnel."