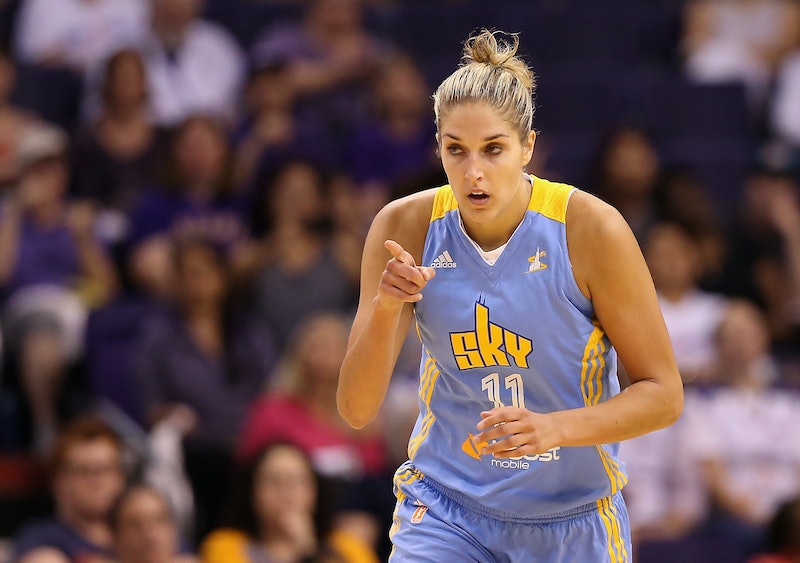 You might not hear the names of star WNBA players as much as you hear about their male counterparts, but they are every bit as awesome. One name you should probably know: Elena Delle Donne, a forward for the Chicago Sky. Delle Donne is having a truly amazing season, and is becoming increasingly well-known in the league — but as revealed in a recent ESPN interview, Delle Donne seems to be handling the fame and the pressure no problem. Because she's awesome.

Right now, Delle Donne leads the WNBA in scoring, averaging 24.5 points per game. She's also on track to set a WNBA record for efficiency if her stats continue through the end of the season. And due in no small part to her help, her team, the Chicago Sky, are currently leading the league in points per game. But it seems that all the increased pressure and attention aren't getting to her.

A recent interview with espnW presses Delle Donne to talk about how the pressure of the season might be affecting her, asking numerous questions about the "responsibility," feeling the need to step up her game, "[feeling] the spotlight," and the possibility of "hitting...a mental wall." In fact the questions seem so fixated on this angle that I have to wonder if male NBA stars get these same questions stressed so heavily. (I can't remember ever seeing it, but maybe that's just me.) However, Delle Donne seems to be doing just fine with all the pressure, regardless.

"[For] me," she explained, "I've just focused on the team instead of focusing on myself. I think that's helped me the most and made me not think about hitting a wall. Plus, I think it's not as fun to focus on individual stats, which is kind of why I'm so focused on this team."

In fact, it seems that if anything, she thrives on the pressure. "[There's] nobody on this road that's going to put more pressure on myself than me," she explained, "so any pressure I feel is always coming from myself and that's what drives me. That's what's driven me my entire life. I've worked so hard to get to this place and I'm going to continue to work as hard as I can to continue to improve. That's just the way I am."

It's pretty awesome to see a top female athlete publicly talk about pressure this way — not as something suffocating or crushing or difficult, but just as a totally normal, under control aspect of life. One of the favorite tropes in our society is to portray successful women as struggling personally as a result of their career, whether it's the romantic comedy career woman who really just wants to find love, the character of the successful business woman whose ambition has of course ruined her marriage, or the endless real life discussions about whether women can "have it all."

In fact this tendency is so ubiquitous, I've often wondered if society is trying to punish successful women by portraying them as unable to handle their success. Or do we just find successful women so unnatural that we assume they must be unhappy as a result? Either way, the impression this gives off is that successful women must constantly be on the verge of cracking under pressure.

That's why it's awesome to see successful women just brush off the idea and state with total confidence that pressure is no big deal. And even more exciting from a sports fan perspective is Delle Donne saying that she's doesn't intend to stop improving her game. "Next year," she said, "I plan on playing better than I have been this year."

And I for one am looking forward to seeing it — and to watching the rest of her so-far fantastic season.

More like this
Here’s What Sarah Jessica Parker’s Canned Cosmo *Actually* Tastes Like
By Emma Garza
Rihanna & A$AP Rocky’s Astrological Compatibility Proves They'll Be Amazing Parents
By Nina Kahn
Jake Daniels Just Became The UK’s First Active Football Player To Come Out As Gay Since 1990
By Sam Ramsden
What Is Jeanie Buss' Net Worth? The Lakers President Is Uber Rich
By Hugh McIntyre
Get Even More From Bustle — Sign Up For The Newsletter