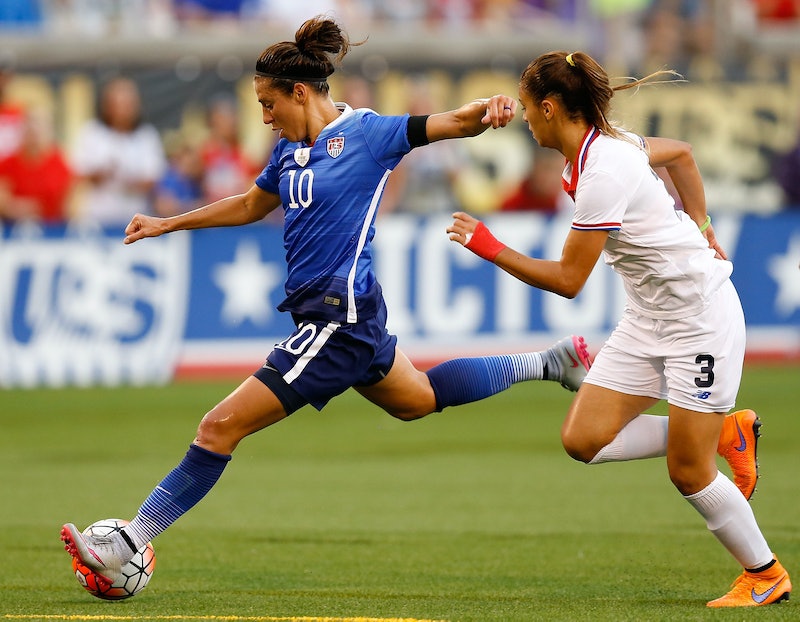 If the awesomeness of the 2015 Women's World Cup has left you wondering how you're going to survive the four years until the next tournament, there's a book coming in 2016 that may help tide you over: soccer player Carli Lloyd's memoir. The book will describe how Lloyd overcame the challenges that almost caused her to quit the sport in 2003 to become a vital part of the U.S. Women's National Team. According to publisher Houghton Mifflin Harcourt, she will also discuss "her emphasis on physical and mental strength." There will also be a young readers edition of the book for the littler soccer-loving girls looking for some inspiration.

Lloyd was already a two-time gold-medalist and one of the biggest women's soccer stars in the U.S., but she became a national sports hero with her performance in this year's World Cup final. Not only did she captain the game against Japan, but Lloyd also scored a hat trick (the first by a woman in a tournament final) within the first 16 minutes. To say that she's a remarkable athlete is to drastically understate her achievements.

Unsurprisingly, fans are already excited for the book, suggesting potential titles and tweeting their support.

Hopefully, the enthusiasm for this book will help reinforce the importance of women's sports and remind people that great feats of athleticism, like those of Lloyd and her teammates, are worthy of celebration, regardless of the gender of those participating.

More like this
16 Novels That Paint A Realistic Portrait Of Abortion
By K.W. Colyard
At 14, Jenny Han Wrote Rom-Coms About Her Friends & Fan Mail To Leo DiCaprio
By Alyssa Lapid
Howard Stern's Net Worth: Is He The Richest Man In Radio?
By Hugh McIntyre
Aesop's Queer Library Is Open
By Tomi Otekunrin
Get Even More From Bustle — Sign Up For The Newsletter