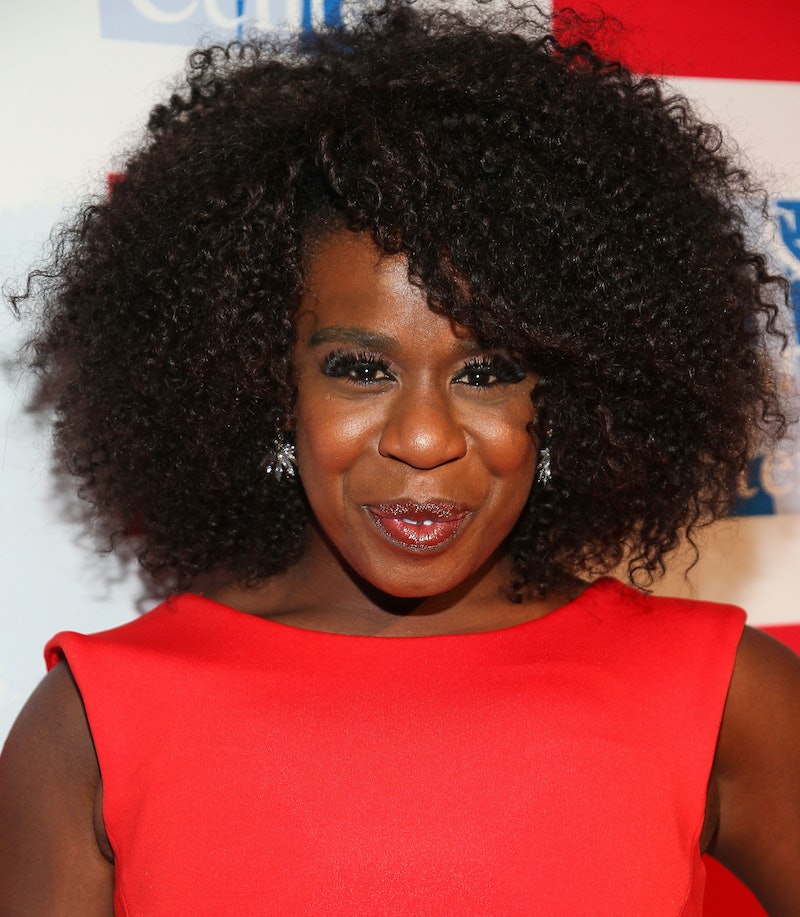 Orange Is The New Black is a show chock full of break-out characters, but the one we didn't expect to make us think is "Crazy Eyes," a character first introduced as the boundary-defying creepster who wouldn't leave main character Piper alone. As the season progressed we saw there was more to Suzanne "Crazy Eyes" Warren, and these layers proved one of the best surprises of the show's first season. So when Entertainment Weekly got Suzanne's portrayer Uzo Aduba to write about her character, it only made sense to pay attention.

You should really go and read the entire piece (a part of EW's end of the year "Best Ofs"), but here are our personal favorite bits:

On Suzanne's love of Shakespeare:

When [Suzanne's love of Shakespeare] came up, I was like, “oh, that totally makes sense.” Of course she thinks she’s an orator. She thinks she’s a woman of words and language, a master of it.

Fun fact: The quote Suzanne uses when she takes the Bard to scare the kids straight is an excerpt from Coriolanus. And her clarity:

The thing I love about Suzanne — there’s nothing unclear about her. You know exactly where she stands, what she’s for and against. And at the end of the day, she has no problem asserting herself. ... So when she does something like pee on the floor or have that confrontation with Alex or confront Piper in the bathroom, there’s no mincing ever.

The stage direction that informed so much:

Marco Ramirez, wrote this really beautiful stage direction. It was so simple but totally helped me figure out who this woman is. He had written something to the effect of, “She is innocent like a child, except children aren’t scary.” And that totally made sense to me.

And on the power of Orange Is The New Black's ensemble (AKA it is not just about Piper):

We come into the prison, and we’re brought in through the lens of Piper, right? And then we meet these people as she does. And so we kind of see this fun house mirror version of these people. Then suddenly she starts settling in and assimilating, and actually starts to listen to what’s being said, and really starting to see them. And we [viewers] start to see them, and it’s like, “Oh, you aren’t just a number. You are actually a person who comes from somewhere else.” [...] I definitely felt excited [when I read that script] because I was glad we were continuing this thread, as a team and as a company, of not making her this sort of flat line, one-dimensional thing.

And that really is one of Orange Is The New Black's best traits: The show would have been so much weaker if Piper were in actuality the soul of the series, but she's really not — the other inmates of Litchfield are, and Piper is just our way to get to them. Discovering Suzanne and her messy thoughts and her drastic actions was one of the biggest joys the series' first season had to offer. The promise of getting even more of her, and of every other woman in that ensemble is why we can't wait until Season 2.It's like what OITNB writer Lauren Morelli wrote in Death and Taxes:

I stood in front of the monitors watching 75 women stand in a circle, dancing and yelling while two women humped each other. Taylor Schilling, who plays Piper on the show, had hung around to watch the chaos. She leaned over to me during a take and said, 'When have you ever seen this many women on screen together?' In that moment I realized we were doing something really special.

Excuse us, we feel like reciting Suzanne's trademark poem to Aduba for giving us the gift of that article: