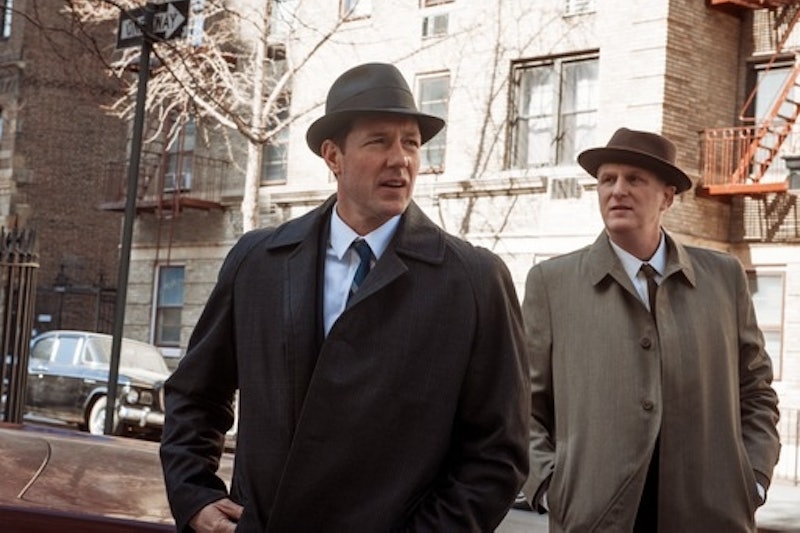 Law & Order… CSI… NCIS… Criminal Minds… What do all of these things have in common? They fall under the jurisdiction of one of television's greatest and most renowned genres: The crime procedural. The formula is relatively simple. A bad guy does something, well… bad. And, then the good guys do everything they can to make sure justice is served. But, before you start assuming that TNT's new series Public Morals , which premieres Aug. 25, is just another typical, run-of-the-mill cop drama, then think again. This show will give viewers a close, inside look into not just the professional lives of these characters, but their personal lives as well. Or at least that's what actor Cormac Cullinane told me while dishing out a few Public Morals spoilers during an interview with Bustle.

"Public Morals is different from all the other shows. It shows two sides because of my dad [on the series], Ed Burns. It shows how he reacts to all the crime and all the criminal life in the city," Cullinane reveals. "But, then it also shows his family life. It'll show the personal side of things, which makes it really, really unique and different."

It's true that many crime shows focus mostly on their characters' careers and tend to neglect many details about their social life. But, that's a theorem Public Morals is looking to dissolve. That's where Cullinane's role comes in.

Cullinane plays Ed Burns' character's son, James Muldoon, who is on the verge of becoming everything that his cop father is working so hard against — a member of the morally corrupt underbelly of New York City's criminals. So, will he be lured to the dark side or can his father bring him back to the side of righteous? According to Cullinane, that will serve as a major part of his storyline throughout the season. "Right now he's kind of a bad kid, but as he gets older he's going to have a lot of decisions to make and it's kind of fifty-fifty," the actor says. "It's very easy to go one way or the other. He can either be a criminal or he could do the morally good thing, which his father wants him to do."

But, don't be too quick to judge James and his not-so-great decisions. Like many kids, he ends up falling in with a rough crowd and faces the challenges of peer pressure. "It's not that he doesn't like his father," Cullinane explains. "He wants his father to be proud of him. He just has so much stuff influencing him. Where he lives… the neighborhood that he lives in… the friends that he makes. He's kind of more toward the criminal ledge now and it's not necessarily that he wants that, it's more that that's what was put upon him."

And, just in case you need a little more convincing that trouble and violence is coming his way, Cullinane teased what fans can look forward to in the first season using only emojis:

Based on this, I think it's safe to say there's a whole lot of crime (and maybe even some sunny weather?) in his future that's sure to leave all of us viewers on the edge of our seats. So, if you're not tuning in every Tuesday, then you're doing something wrong.

More like this
6 Mind-Blowing Fan Theories About How Stranger Things Will End
By Kadin Burnett
Why Sadie Sink Is Hopeful Max Will Return In Stranger Things Season 5
By Brad Witter
'Stranger Things' Star David Harbour Has This Actor In Mind For A Hopper Spinoff
By Alyssa Lapid
What Working At Marvel Is Really Like, According To A 'Ms. Marvel' Co-Creator
By Gretchen Smail
Get Even More From Bustle — Sign Up For The Newsletter