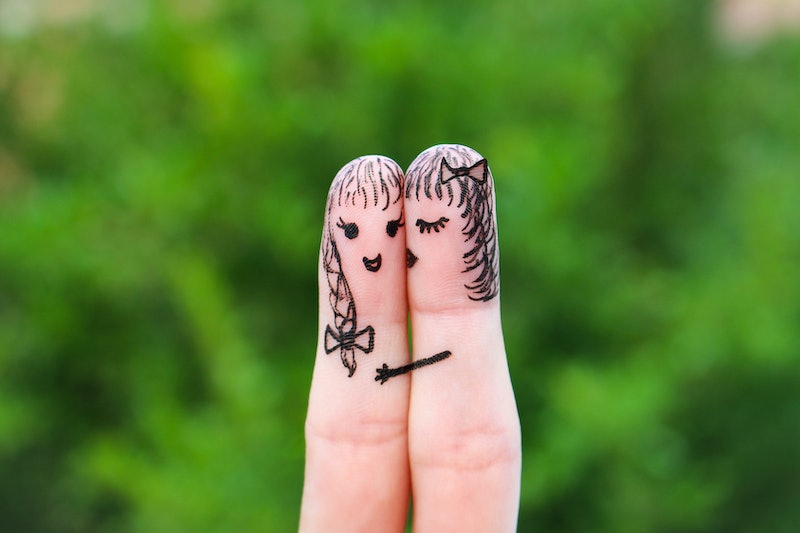 There's a study floating around the internet this week triumphantly declaring that half of British millennials describe themselves as "sexually fluid." YouGov U.K. recently asked 1,600 adults aged to "rate" their sexuality on the Kinsey Scale, and a whopping 49 percent of 18-24 year olds reported that they identify as something other than exclusively, 100 percent straight.

While that could totally wind up being a representative number — and it wouldn't be surprising, given the significant increase in queer visibility millennials have enjoyed in comparison to our parents' generation — the study has one overwhelmingly problematic flaw that pretty much kills any of its credibility: it used the Kinsey Scale to gauge self-reported sexual orientation.

The Kinsey scale was a model developed by Alfred Kinsey in the late 1940s to assess a person's sexual orientation on a scale of 0 to 6, with 0 representing an exclusively heterosexual experience, 6 representing an exclusively homosexual experience, and more nuanced degrees of desire ranging from 1-5. Findings from the Kinsey Reports discovered that most men and women fell somewhere in the middle.

While this was undoubtedly important and groundbreaking work in discovering the nuance of human sexuality at the time, the Kinsey scale was developed in the 1940s. Remember how when you were doing research for your high school science fair, you weren't allowed to cite sources that were published more than 10 years previously? There's a reason for that. The study of human psychology and sexuality has grown leaps and bounds since the Kinsey scale was developed, and it's widely regarded as lacking in a lot of ways in terms of describing the full range of human sexuality. For one thing, it doesn't account for expressions of asexuality, a hugely underrepresented community to begin with.

For another — and most importantly to the YouGov UK study — the Kinsey scale is predicated on the outdated notion that gender is binary. Your only options are to choose whether you are attracted to people assigned the sex you were assigned at birth or people assigned the opposite sex, which isn't how gender works, and thus isn't how we describe sexual orientation anymore. The Kinsey scale assumes a cisgender experience of both the person self-reporting, and the gender to whom they are attracted. The reality behind sexual fluidity is that fluid people find themselves attracted to masculinity, femininity, and/or androgyny, not simply "men," "women," and/or "both." Sometimes the packaging of "biological sex" matters in the attraction, but most of the time, it doesn't. The Kinsey scale, however, only works in terms of "same or opposite sex."

With infinite gender identities come infinite sexual orientations. Is a cis woman who is attracted to women and trans* folks, but not cis men, considered homosexual? Try telling that to her trans boyfriend.

Millennials grasp the complexities of gender identity way better than the Kinsey scale ever did, so of course, when presented with the idea at face value, most of us would balk at the idea of being "exclusively straight." Are you a straight woman who finds herself mercilessly attracted to Ruby Rose when she opts for a masculine gender presentation?

Cool, but that's not really a "homosexual" inclination, as all queer women will patiently remind you. Nor is it an entirely "heterosexual" inclination when a queer woman is attracted to a trans man. These attractions can't be plotted on a binary scale. Maybe they could be on a graph with an x-, y-, and z-axis, but that's definitely not the question YouGov UK posed.

It may very well be true that 49 percent of millennials identify as sexually fluid, but this study can't prove it with its research methodology. Using the Kinsey scale as their measure of attraction destroyed any chance of merit or credibility YouGov UK could possibly claim.