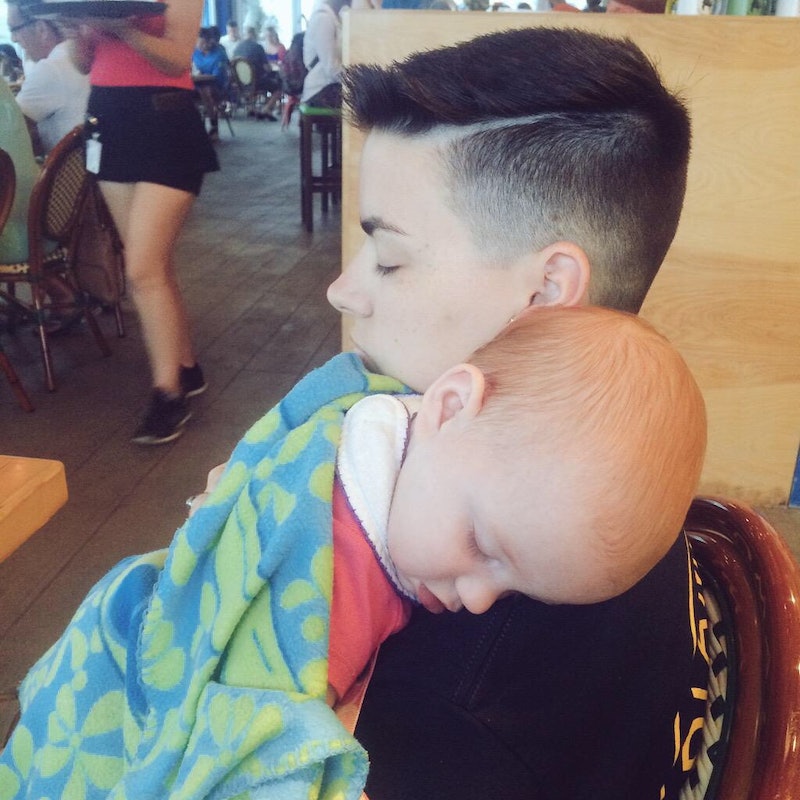 Being a mom ain't easy — as if the act of raising children wasn't hard enough, mothers are constantly told what to wear, how to act, and generally, that they're doing everything wrong. The now-viral Tumblr Butches and Babies, though, is doing its best to break down the stereotypes surrounding childcare and femininity, one awesome "butch" person at a time.

The website's premise is pretty simple: It collects images of people who identify as butch cuddling with adorable munchkins. But the message behind it runs even deeper. "While the number of celebrities embracing butch identities has increased dramatically over the past 10 to 15 years, the reality is that we don't see those people building families publicly," creator Meaghan O'Malley tells Bustle via email. "And while the vast majority of the butches and babies seen on the blog are not in family dynamics together, I hope that it will at least give young butches permission to hope for that life, if they wanted it."

In addition to being super freakin' cute, O'Malley hopes that the website provides representation for an often-overlooked identity. "There is such power in representation, and such value in strong interpersonal relationships with people of all ages..." she writes. "I hope it encourages people who don't have butch friends in their life to find some, because the value of diversity in friendship is limitless."

"Gender is complex, sometimes confusing, and people feel a lot of ownership over how it is manifested in themselves, and thus how the community they belong to presents as well," she continues.

As an LGBT lady myself, I can personally attest to the importance of representation as well. Butches and Babies, however, shows that people who identify as butch aren't defined by their butch identity, any more than I'm defined by my red hair or bisexuality.

It should also be noted that "butch" doesn't always apply to the traditional stereotype of a cis, lesbian woman. Although those characteristics can be found in some individuals, there is also a variety of others who identify as butch but don't fall under the female label — or any gender label at all, for that matter.

"B+B is full of incredible people, adults and minors, with a variety of gender identities (and sexualities, which are wholly irrelevant to this blog) all under the umbrella of butch," O'Malley wrote in a recent Butches and Babies post concerning the attention the blog has recently received.

Check out a few more images below, and head over to the Butches and Babies website to submit your own.

Images: Courtesy of Butches and Babies

8/26/2015: Edited for pronoun usage and to clarify remarks concerning the butch identity. For more information about the butch identity as it relates to Butches and Babies, head over to O'Malley's recent blog post on the subject.