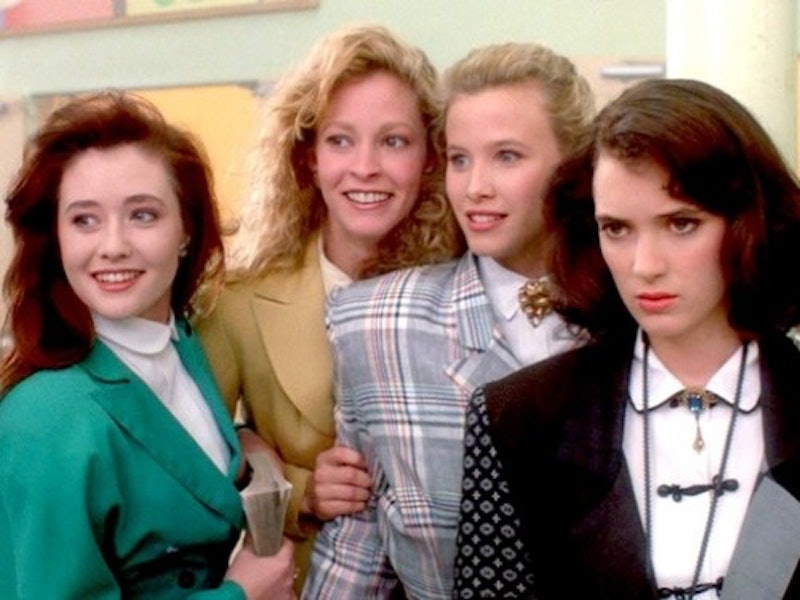 Where do we draw the line between antihero and simply unlikable? In a 2013 essay, Flavorwire noted the disturbing lack of female antiheroes in films — those characters with whom the camera identifies, but who can't really be described the protagonist because they have a deficit of "pro." Male antiheroes are far more bountiful (think of Hugh Laurie's House or Benedict Cumberbatch's Sherlock — abrasive, to be sure, and at times outright cruel to those around them, but not without redeeming qualities). But there seems to be a tendency to refer to not-totally-empathetic women in film as "antiheroes." They're not. Antiheroes, in contrast, feature exaggerated qualities that don't quite attain villainy, but are unrealistic nevertheless. Instead of reflecting some essence of personhood, they reflect a point that a film is trying to promote by calling attention to certain traits or aspects of society.

That's not to say there aren't female antiheroes. They are few and far between, and they definitely toe the line of villain, but they are still the individuals with whom the camera's gaze empathizes. They might be on a bloodthirsty revenge quest (see Lisbeth Salander in The Girl With The Dragon Tattoo or Beatrix Kiddo in Kill Bill) or they might simply be a little deranged (see Juliet Hulme in Heavenly Creatures or Bea in Honeymoon), but audiences still root for them. While there are not a whole lot of them, the female antiheroes that exist show that there is a bit of room for depth within the trope — and and for those who can be really dark without being evil.

The Girl With The Dragon Tattoo: Lisbeth Salander, Played By Rooney Mara

Lisbeth Salander vows revenge — it's a classic theme that will return again and again in the course of the antihero. As played by Rooney Mara, she's calculating and a bit unstable, but most of all she just can't quite communicate on the same wavelengths as those around her. She's not the bad guy (though, as is the case with many antiheroes, it's because a more evil target lies in wait), but she can't truly be said to be the good guy, either.

Writer Diablo Cody (who was also responsible for the Juno screenplay) is known for her fleshed-out, at times uncomfortable female characters. The astonishing thing about Charlize Theron's character in Young Adult is that she's unapologetically selfish, and she does not change a bit from beginning to end of the film.

As with Charlize Theron's Mavis, it can be uncomfortable to watch how un-self aware Cate Blanchett's Jasmine is throughout Blue Jasmine. She's accustomed to a life of luxury she can't escape, even when broke. She's often cruel to her sister. She lies about her past to a new flame. In the end, she seems to suffer a complete mental breakdown. Unfortunate though it is that a female character devolves from unsympathetic to psychologically damaged, Jasmine is a caricature meant to prove a point more than she's there for realism.

Just proving yet again that women are just better at putting out films about other women, Leigh Janiak's directorial debut is a sort of contemporary gothic horror film. And Rose Leslie's character Bea, who may be possessed by aliens, means no harm (though harm does come). She's a loving wife, albeit one with a few secrets she's not willing to share, and the refusal of those around her to take her seriously slowly drives her to the limits.

Veronica is just a girl who's had enough — so she goes on a killing spree. The antiheroes in this list are often satires, exaggerated women painted in broad strokes more often to say something than to portray a real person. They're overblown, and that seems to be what separates them from the merely unlikable. These films take certain qualities that might tend towards anti-hero-dom and run away with them.

Quentin Tarantino has a thing for powerful women. Literally, very powerful women. Wielding swords or heavy artillery. Beatrix Kiddo, like Veronica of Heathers, is just a woman out to right the wrongs done to her — but the way she goes about doing that involves quite a lot of bloodshed. Is it still an anti-hero if her revenge is completely justified?

Inglourious Basterds opens with the murder of Shoshanna's family, but it veers away from her story for much of the film. Still, she's in the background, waiting for her moment, and when it comes, it's certainly heroic — though, like Beatrix Kiddo before her, it comes with a lot of Nazi-directed violence.

Kate Winslet's character in Heavenly Creatures is the prototypical bad influence — when her best friend Pauline's parents threaten to separate them, the girls concoct a plot to do off with the parents. It recounts a sensational murder, but it also tells the story of the impact of broken homes and neglect.

The risk of the label "antihero" is more in categorizing than in the actual character herself. It's another method of control — of drawing a line around woman and the way she is depicted — and, while convenient, it's ultimately destructive. There are female antiheroes out there, but that doesn't mean they can be conflated with "unlikable." Furthermore, female characters who are unlikable can't be criticized as bad people just because they possess a few unsympathetic qualities. More often than not, the antiheroes around us are meant to point a finger at some aspect of culture and society by exaggerating it. People are often unlikable. Less-than-desirable qualities in female characters make them less like characters and more like people. Men have been doing it for forever, and it's about time that women got their share of unlikability, too — but that does not make them an antihero. Antiheroes are out there, they're awesome, but ultimately they're not real.

More like this
The 'Spiderhead' Movie Ending Is Nothing Like The Short Story It’s Based On
By Morgan Leigh Davies
16 Novels That Paint A Realistic Portrait Of Abortion
By K.W. Colyard
Ottessa Moshfegh Is Happy To Be Your “It” Girl
By Arya Roshanian
'The Summer I Turned Pretty' Book Ending Is An Emotional Rollercoaster
By K.W. Colyard
Get Even More From Bustle — Sign Up For The Newsletter