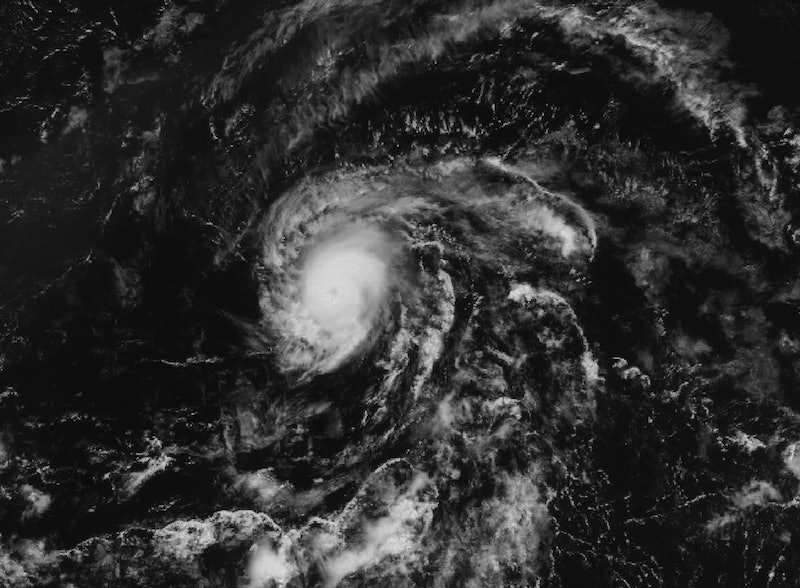 Hurricane season arriving means that meteorologists are on the lookout for those scary storm fronts moving across their magic weather-predicting screens (official term). And it looks like there might be a bit of ugly weather headed across the Atlantic. Hurricane Danny is on the radar now as the first Atlantic hurricane of the 2015 season (yay?). The National Hurricane Center first classified Danny as a tropical storm, but then upgraded it to a full-fledged hurricane at 11 a.m. on Thursday. So will Hurricane Danny hit the U.S.?

USA Today reported that the hurricane is still relatively small — 2012's Hurricane Sandy is equal to three Dannys — and its forces are moving west/northwest at 12 mph. Note: Did someone name these storms just so we can make constant Grease references? Just a thought.

Although it's not a major one yet, this storm is a tad more serious than poodle skirts and songs about teenage summer flings. Now classified as a Category 1 hurricane, Danny is located 1,030 miles east of the Caribbean Islands, and about 2,400 southeast of Miami. The hurricane should hit the Lesser Antilles by Monday, and Puerto Rico by Tuesday. The Sun-Sentinel reports that the storm's next target will likely be the Dominican Republic.

NBC News reported that Danny might be downgraded to a tropical storm by Tuesday. Although it might be too early to tell, it likely won't pose a threat to the U.S. If the storm takes its predicted course to Puerto Rico, it could weaken, but things could go differently — it could also pick up and take a turn toward the Eastern Seaboard. Time will tell.

As of now, the National Hurricane Center has not issued any official watches or warnings, and has posted no "hazards affecting land." So basically, the Tropical Storm Powers That Be have dubbed Danny a baby hurricane for now. But this doesn't mean we shouldn't be keeping watch on 2015's debut hurricane — no matter its size.

As usual, Florida isn't all sun, beach, and Mickey Mouse ears. The state is right on the coast, and as Slate reported, it should be on the lookout for the storm. Although Danny might struggle to pick up speed, "a weak version" could hit Florida in about 10 days. But it's all a game of wait-and-see before it's time to officially batten down the hatches.

More like this
The 15 Best Dresses For Hot Weather
By Andrea Gale Boerem
Camila Cabello's Y2K-Chic 'Fit Serves Major Underboob
By Meguire Hennes
For These Abortion Clinic Volunteers, Going TikTok Viral Is A Risk Worth Taking
By Audra Heinrichs
Jurnee Smollett’s Heart Is Healing
By Rebecca Carroll
Get Even More From Bustle — Sign Up For The Newsletter