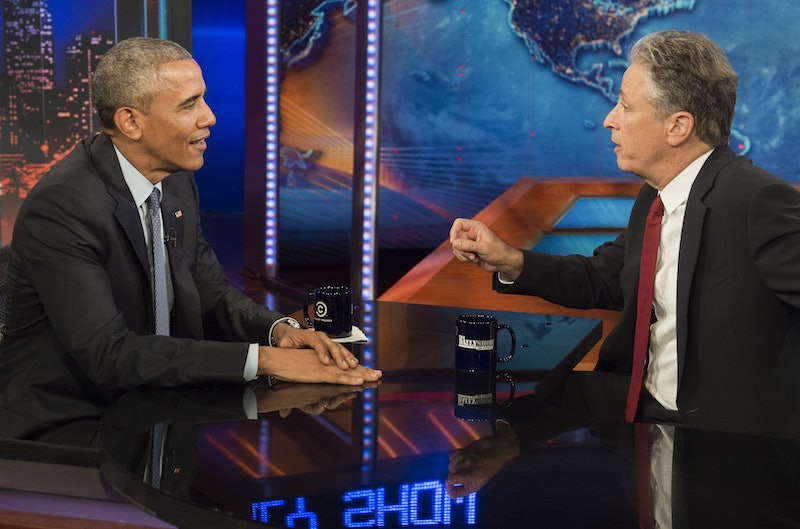 Don't get too excited just yet, but there's buzz about Jon Stewart moderating a 2016 presidential debate and making all of your wildest dreams come true. Stewart fans started a Change.org petition requesting that the recently retired Daily Show host moderate a presidential debate, citing Stewart's years of experience interviewing sitting and former presidents and his whip-smart political commentary as top reasons why he'd make an excellent moderator. And while presidential debates are always moderated by journalists (of the non-satirical variety), it's certainly fun to daydream about other beloved figures we'd like to see grilling the presidential candidates. So, besides Jon Stewart, who else would make a great debate moderator? Since it's not likely anyone other than tried-and-true news anchors will get the job, we're free to use our imaginations here.

So many names come to mind. It would be a breath of fresh air to see some figures who are generally removed from politics altogether in their public life ask questions that American voters want answers to, and, of course, hearing political satirists stick it to the candidates is always a good time. From comedians to serious thinkers, to people we just like to watch on TV, here are some other famous folks I'd love to see moderating a presidential debate:

As the more than 200,000 signatures on the Change.org petition asking for Stewart to moderate a presidential debate suggest, Stewart would be a well-qualified and sincerely entertaining moderator for upcoming debates. Not only does he have a ton of experience interviewing U.S. presidents and other world leaders about tough issues, he's also damn funny, and I want to laugh at something other than Donald Trump's hair during one of these things.

Tim Gunn is one of the most likable people on television, and his voice is just so pleasant. I imagine a debate hosted by Tim Gunn would start off something like this: "Candidates, gather round. I just want to tell all of you that after hearing your plans for Iran, I'm very concerned. What are you going to say to Michael and Nina and the rest of the American public in defense of these ideas? This is a real 'make it work' moment for all of you."

I'd especially love to see feminist writer Roxane Gay moderate a debate for the Democrats so that Clinton and Sanders would have to answer to someone who would really push them on their claims to progressivism, especially in terms of women's rights and Black Lives Matter.

As a Nobel Prize winner, Malala is no stranger to speaking with eloquence and conviction in front of world leaders. Given that much of presidential debates center on foreign affairs, why not have a world-class representative from the Middle East ask candidates about issues that would affect the region of her birth, and also take the opportunity to bring a younger person's perspective to the political arena?

Like Jon Stewart, Larry Wilmore is a Comedy Central pro who really knows his politics. He's an expert with political zingers, and has made social commentary worthy of any presidential debate. Wilmore would be a great moderator for either the Democrats or the Republicans, and I think he would be especially good at dealing with Donald Trump, given the sheer number of times he has trounced Trump's policies on his show.

The Ladies Of OITNB

In character, of course. I'd want to hear them make the candidates get extremely real about prison reform, women's rights, mother's rights, LGBTQ equality, the war on drugs, and immigration. Just imagine Sophia making Huckabee own up to his gross transphobic comments, and Flaca owning Trump on immigration policy. It would be one for the ages, and would probably be streaming on Netflix so we wouldn't have to dedicate any more time watching Fox News than we already have this election season.