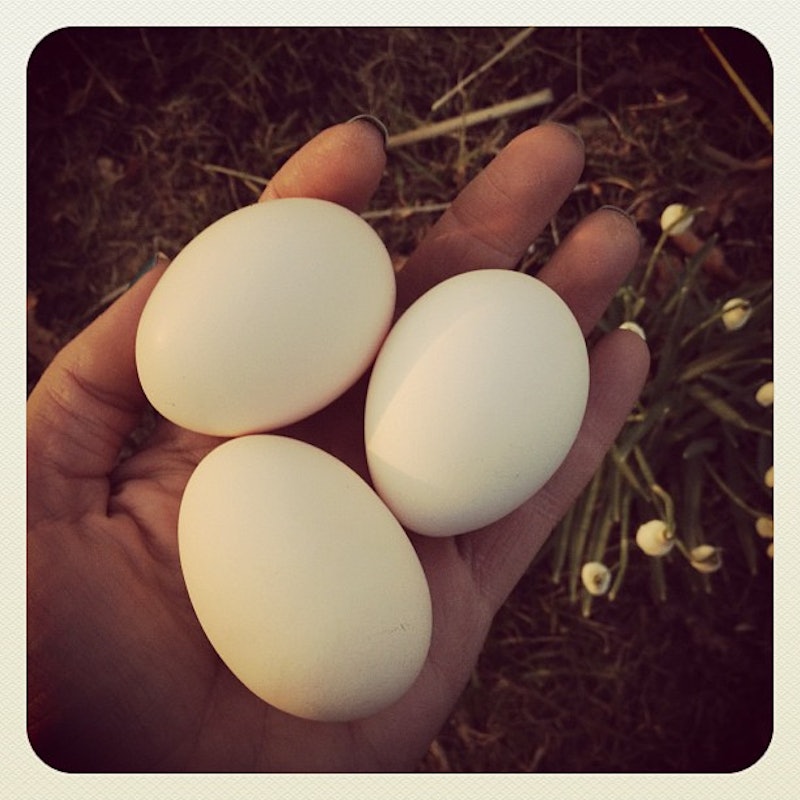 The idea of freezing your eggs — postponing actual pregnancy, but retaining the healthy, happy eggs of your younger body until you're financially capable of having a kid — is on the rise among young women, according to Scientific American. So much so that there's been a warning backlash: big stories in WIRED and TIME have detailed the fail rates, crippling expense, and serious biological tolls of egg-freezing across their front pages. The point is being pretty heavily made: this isn't for everybody who feels like putting off childbearing, or for even those who can't because of illness. But there are plenty of women who are still wondering if it's the right choice for them.

Egg freezing is a relatively new concept. The process of rapid freezing, where eggs are immersed in liquid nitrogen and rapidly chilled, was only invented in 2005, and it was only declared mainstream rather than experimental as a fertility treatment in 2012. Arguments about failure rates can get pretty heated: clinicians point to the fact that it seems to have the same baby-making success as IVF with a non-frozen egg (there are a lot of similarities between the procedures), but others don't think that rate's good enough — it averages 20-35 percent — to justify the expense and invasiveness.

One thing's for certain: you are very much not guaranteed a baby by putting your eggs into cold storage. But if you're seriously thinking about taking the liquid nitrogen plunge — and good for you — here are some in-depth details on the process and what really happens behind the scenes of the IVF clinic.

1. Getting Your Eggs Ready To Be Harvested Can Take A Month

Harvesting eggs (above) from your nethers isn't a matter of going in, having them scraped off, and wandering on your merry way. The process of preparing for egg harvest is very similar to IVF: you're injected with hormones that stimulate egg production and often put on birth control as well. This can take over a month, and is liable to give you hormonal side affects, including hot flashes, nausea, and headaches.

Once your body's produced excess eggs, they're removed (while you're knocked out, don't worry) by a needle into the vagina. Sexy, right? Up till this point the procedure is identical to IVF — it's what comes next that marks it as different.

2. Your Eggs Can Be Frozen Either Quickly Or Slowly

You may not know this, but there are two different ways to freeze eggs once they've been taken out of your system. One is called vitrification, where eggs are rapidly dehydrated using antifreeze (yes, that antifreeze, and no, it doesn't harm them) and then plunged into liquid nitrogen, freezing them.

There's another way, too, which is older and can lead to more damage to the eggs. It's known as slow freeze, and involves gradually freezing the eggs — but most clinics now use the vitrification method, which was invented in 2005, as it's less likely to cause any problems with the eggs' viability when they're eventually thawed.

This is an industry standard. To give you some idea (not that it's possible), the lowest winter temperature ever recorded in the Antarctic, the coldest place on Earth, is -128.56°. In technical terms, it is f*cking cold.

4. When You're Ready, They're Thawed & Fertilized

Getting a frozen egg ready for pregnancy isn't left up to chance. Instead, once it's thawed — which happens incredibly rapidly, usually in a day, through immersion in warming liquid — it's fertilized by fresh semen from your chosen baby-daddy, using an injection directly into the egg. Then, after 16 hours, the egg that have been injected are inspected, to see if any have been fertilized and become embryos (above).

They continue to be watched for three to five days, and that's when a fertilized embryo might be implanted in your uterus — which, by the way, has been prepared for the possibility by a course of ovary-blocking medication, so it's not producing new eggs.

Exact data is hard to come by, but only 5,000 babies are estimated to have been successfully born thanks to frozen eggs. The longest anybody has seen an egg thawed successfully is 10 years, but that was an aberration: most common freezing periods are measured in months, not years. Nobody's ever studied whether the eggs could survive any longer, and clinicians will not recommend that you risk it.

6. The Success Rate Is Only 24 Percent

Out of 414 egg thaws in 2013, according to TIME, 83 live babies resulted. It's a success rate of 24 percent — which is good, but not earth-shattering. It's also dependent on what age you are when you freeze your eggs: the older you are, the more likely the eggs won't be viable. So you should do a lot of research on the financial commitments and your family history of infertility before you go ahead; it may not be the right choice for you.

7. The Minimum Recommended Number Of Eggs To Freeze Is 10

Want to up your chances of a future baby as much as possible? Do a batch of eggs in one go. The normal number recommended by clinics is 10-20 — because it makes the possibility of a viable thawed egg that becomes fertilized a lot more probable. It's a "just in case" situation — there are a lot of reasons that eggs may not become embryos or survive the freezing process intact, so more eggs means more probability.

8. The Cost Of The Procedure Is More Expensive Than Storing The Eggs

The two big expenses of freezing your eggs are at the start and the end. The freezing process will cost an average of $10,000, plus fertility drugs, and the thawing and fertilization will take another $10,000 chunk. Depending on your state, your clinic, and other ideas — like whether you're part of an egg-sharing program where other women may use your eggs — the cost of storing the eggs is calculated yearly, and hits at about $500. Because fertility treatment is normally viewed as an elective procedure, it's unlikely that insurance will cover it.

9. You Can Also Freeze Fertilized Embryos Instead

Eggs are delicate things, and not all of them may make it out of the nitrogen vat with the capability to bear a kid. There is, however, another option: if you already have a partner or sperm donor picked out, it's possible to freeze a fertilized embryo too. People sometimes do this with unused eggs after an IVF cycle: the egg is injected with sperm, fertilized, and then frozen indefinitely. Unfortunately, this can lead to legal complications if you then break up, as Sofia Vergara's legal battle over embryos with ex-fiance Nick Loeb demonstrates.

Whatever your choices, make sure you've got all your financial, legal, health, and emotional ducks in a row before you make the plunge. Or duck eggs, as it were.