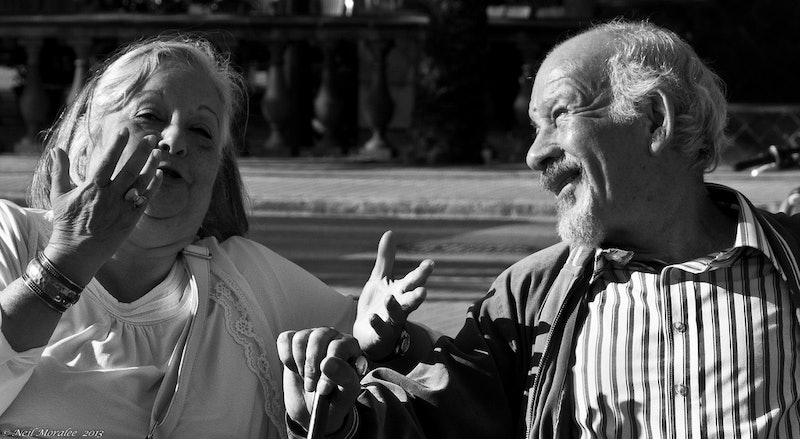 Our society is weirdly obsessed with age, and somewhat contradictorily so, at that. But amidst all the comments about who is or isn't "aging gracefully" that are based solely on physical appearance, sometimes we lose track of the fact that the best ways to age gracefully have nothing to do with what we look like. They're about what we do, the attitude we maintain, and how we deal with the world. That's what this video from CBC Radio One program WireTap gets at — appropriately titled “How to Age Gracefully,” it teaches us countless lessons from people ranging in age from 7 to 93 about how to make the most of getting older. The short version? Growing up is a process, and it never really ends.

The video is bittersweet for more reasons than one, though: It's a farewell from WireTap , which has finally ended after the conclusion of Season 11. Created by Jonathan Goldstein, a former producer on This American Life, WireTap invited audiences to “eavesdrop on a mix of funny, thoughtful, and unpredictable stories and conversations.” First begun in 2004 on CBC Radio One, it made its way into the podcast circuit in 2009. It was one of the best storytelling broadcasts out there, and its absence will be sorely felt by all its fans. (Although due to the airing delay, listeners in America will be able to get a hold of it until June of 2016. Hoorah for that, at least!)

But, as Goldstein wrote in his farewell message on the WireTap website, “11 years is a long time to do something"; indeed, he noted, “the show has run longer than Seinfeld and All in the Family. It's run longer than I, or anyone, could have ever imagined. He said “it felt like time to try something new” — and, as sad as it is, being able to identify that fact is essential. Because you know what happens when shows go on longer than they should? They become shadows of their former selves. It's almost always better to end something when it needs to end, rather than stretch it out into a long, extended death.

On Sept. 6, 2013, the show's tenth season kicked off with an episode called “How to Age Gracefully.” In it, people between the ages of 5 years old and 90 years old shared their wisdom about growing up — and if it sounds powerful, that's because it was. Goldstein wrote on the WireTap website that it “seemed to have stuck with people”; since it resonated with so many, therefore, he and the show's team decided the best way to send off the show would be to invite listeners down to the CBC and make the premise of that episode into a video. “It's all about growing up and how that process never ends,” said Goldstein — and he's absolutely right. That, I think, is what "aging gracefully" really is: Knowing that you're never "grown up," but always growing up instead.

So, here are nine tips on how to age gracefully. Scroll down to watch the full video — you'll thank yourself for doing it. I promise.

Whether you're talking about training wheels, like this 7-year-old speaking to her 6-year-old self is, or a lost love or a grudge, it's worth learning how to just let it go.

2. No Matter What Anyone Says…

I have mastered few things in life, but I think I have this one down. This kid is definitely going places; he's already got life figured out, and he's only 8 years old.

3. Ask That Guy or Girl Out

If they say no, then see tip number one. And if they say yes? Well, then, you've just started on a glorious adventure. This 16-year-old is right: Nothing ventured, nothing gained.

4. Hang Onto Your Inner Child

5. Look After the Important Stuff

From backing up your hard drive, as this 29-year-old reminds his 28-year-old self to do, or whether it's yourself, your friends, and your loved ones.

6. Remind Yourself: You've Got This

This woman was a single mom at 22. Her son is 14 now, and the amount of pride she feels for him is going to make you cry. For real.

It's never too late. The lady on the left? She's taking her husband's Corvette and going to racing school, because, "If Paul Newman could do it, why can't I?”

In the words of this guy, who has a soft spot for pie: “Indulge your sweet tooth. You're going to need dentures eventually anyway.”

9. We're All In This Together

As this hale and hearty 93-year-old reminds us, “Nobody knows what the hell they're doing” — no matter how put-together they might look. Don't put so much pressure on yourself that you crack, and help other people when they need it. Even if no one has any idea what's going on or what to do about it, at least we can all try our best to be there for each other.