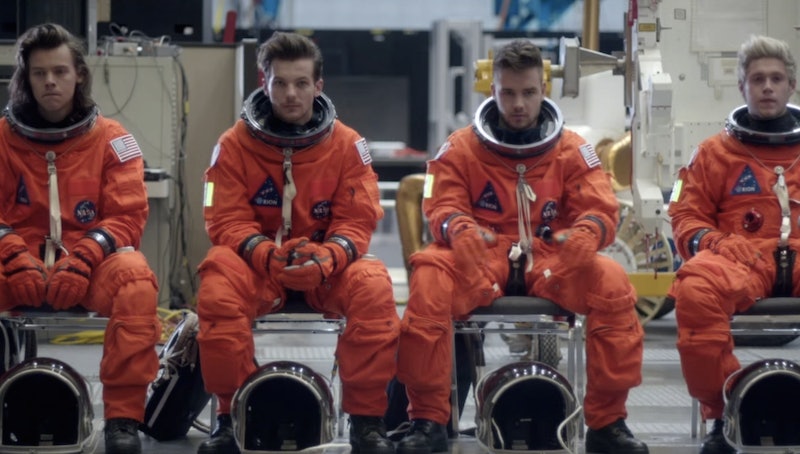 It's no secret that One Direction has checked off all the boxes that make them "the second coming" of the Backstreet Boys and *NSYNC. They've got the harmonizing, they've got the dance moves, and now, they've the required Space-Themed video: In other words, One Direction released the music video for "Drag Me Down" on Friday, and it is the biggest throwback ever. After all — boy bands and space go together like boy bands and fangirls, or boy bands and internal feuds.

A lot of what One Direction has done in the past makes them the typical boy band. First and foremost, the Directioners are a large but mighty force, with the same amount of fervor and excitement I had when I was begging my parents to take me to see the Backstreet Boys back in the day (my seventh birthday still remains to be the best birthday I have ever had). Though lives of the men of One Direction have been full of drama this year, with Zayn Malik leaving the band, it's all apart of the boy band saga. And now, their latest music video proves how onstage and off, One Direction is the consummate boy band, just like we remember.

Taking place at the NASA center, "Drag Me Down" is basically the modern, spacecraft version of The Backstreet Boys' "I Want It That Way." The band takes their homage to the next level, with the space theme, which is totally the ultimate throwback to the '90s/'00s era.

Check out just a few of the similarities...

Check out that dramatic, subtle ticker in the bottom-left corner.

We've got the date and time stamp on the bottom-right this time. Close!

2. Close Up With Boys In The Back

Justin's having a moment, and the other guys just happen to be there.

The other two Directioners just snuck into frame.

3. Dancing By A Spacecraft, Looking At The Camera

Looking at the camera, like Justin is talking directly to us.

Making that same, sweet eye contact by a spacecraft.

*NSYNC took the love of space in the '00s to the next level: they not only set their videos that are ostensibly about girlfriends there, but they sang about space, too

If you play the audio of *NSYNC's "Space Cowboy" on top of the "Drag Me Down" video, it still works.

Britney Spears' "Oops I Did It Again"...

Britney, while playing with his heart and getting lost in the game.

The shot of Niall flying in "Drag Me Down" is similar, but we don't know if he was strapped in by a scorned ex-lover.

Nick Carter IS a robot, DOING the robot.

Harry is simply chilling with a robot.

7. Ending With A Blastoff

Our beautiful boys are launched into space.

The direction is up as 1D's spaceship is launched.

I can't wait to see which classic boy band music video trope One Direction takes on next — I, for one, hope it's "Bye Bye Bye"-inspired marionette dancing.

Check out "Drag Me Down" below.

More like this
All The Sneaky Lindsay Lohan Movie Easter Eggs In Her New Ad, Explained
By Stephanie Topacio Long
S Club 7’s Jon Lee Continues To Reach For The Stars
By Rachel Mantock
The 'Hocus Pocus' Sequel Finally Has A Release Date & It Makes Total Sense
By Shannon Barbour and Radhika Menon
“The Door Is Always Open” For Another 'Breaking Bad' Spin-Off, Says AMC Boss
By El Hunt
Get Even More From Bustle — Sign Up For The Newsletter