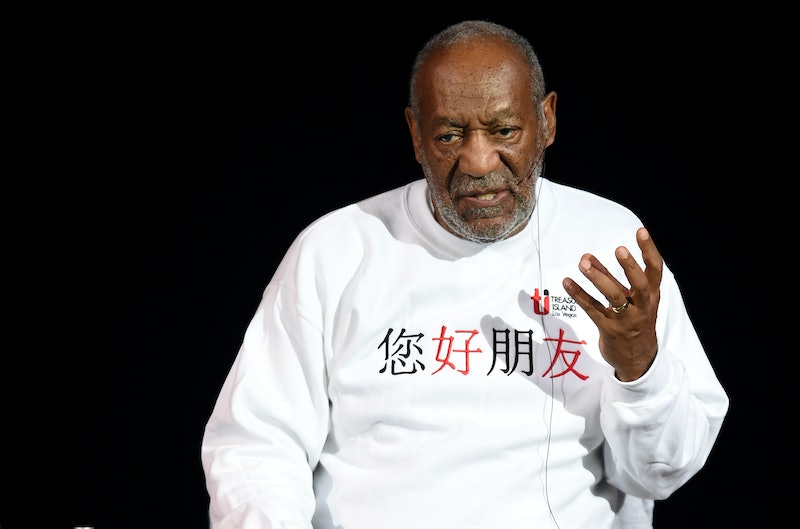 On Thursday during a press conference with lawyer Gloria Allred, two new women accused Bill Cosby of sexual abuse. The women, Charlotte Fox and Elizabeth, whose last name remains anonymous, join over 40 other Cosby accusers who claim the comedian sexually abused them over the course of 40 years. According to Allred, Fox and Elizabeth are coming forward now because "they want the world to know what they allege they were forced to suffer because they had the misfortune to meet a man that they admired and thought that they could trust, Bill Cosby. It is not too late for them to become empowered women."

Fox says she met Cosby when she was an aspiring actress in the '70s and claims he sexually assaulted her at the Playboy Mansion when she was 23 years old. "When I heard the other women, I said: 'Oh my God, that is what happened to me.' I could not believe it," Fox said. As for Elizabeth, she alleges Cosby drugged and sexually assaulted her in his hotel room in 1976. At the time, Elizabeth was a 20-year-old flight attendant.

In July 2015, the Associated Press obtained a 2005 deposition showing Cosby admitting to obtaining Quaaludes to give to women with whom he wanted to have sex. His reps responded to the deposition being made public with the following statement: "The only reason Mr. Cosby settled [the case from which the deposition came] was because it would have been embarrassing in those days to put all those women on the stand and his family had no clue. That would have been very hurtful."

Regarding a current civil case brought forward by accuser Judith Huth, who is represented by Allred, Cosby will testify in court on Oct. 9, 2015, where he will be questioned under oath.

Cosby's lawyer gave a response to the accusations of sexual abuse in November 2014, which reads as follows: