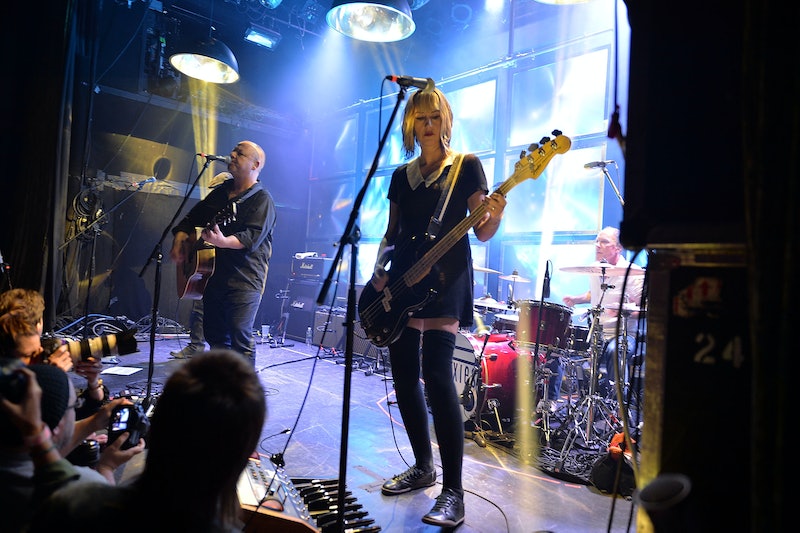 Kim Shattuck was fired as the bassist of the Pixies in November over the phone by the band's manager. The reason? According to NME, Shattuck's guess is it's because she was "overly enthusiastic." It's a bad reason, but it may not be an inherently malevolent one — Shattuck says she was doing things like jumping into the crowd during performances, and the Pixies aren't exactly known for being outrageous rock stars. Although Shattuck doesn't seem to be too upset about it, it does come as a shock to her since she had already agreed to go on tour with the band in 2014:

I was surprised. Everything had gone well, the reviews were all good and the fans were super-nice about everything. They were like, 'We love you, New Kim!' We said goodbye at the airport and the following morning the manager called me and said: 'The band has made the decision to go with another bass player.' I was shocked.

On its own, the story is pretty problematic, although it's pretty egregiously unfinished, leaving hope that the rest of the band has a different side of the story. But considering the band's history with former bassist Kim Deal, it's even more more concerning. Deal and the band's frontman, Black Francis, got along terribly — Deal and Francis' "creative differences" are part of the reason why the band broke up in the early '90s. Lead guitarist Joey Santiago said in a 1997 interview with Mojo (now hosted on this very 1997 looking website) that some of the tension was because "Kim was headstrong and wanted to include her own songs, to explore her own world." It's not all bad, because that meant that Deal went out and formed girl group The Breeders when the band went their separate ways. But when the band reunited in 2004, the documentary that followed their tour, loudQUIETloud, showed that a lot of that unspoken tension was still there. Deal left the band this year and was replaced by Shattuck when the Pixies went on tour.

Now, Deal's replacement has been replaced by yet another female bassist: Paz Lenchatin. Hopefully, the band has a better reason for firing Shattuck that's not her enthusiasm, but the fact that they seem to be continuing to shut out their only female member doesn't say anything good. Deal is an incredibly successful and talented bassist, and even she had problems playing with the Pixies; how will her successors thrive in the band if they're barely given the chance to? Hopefully, the PIxies have good reason for firing Shattuck. And hopefully, Lenchatin will do well in the band. But women already have a difficult enough time being taken seriously in rock music as it is, so it's not a good sign when even bands like the Pixies, who are pretty far from anything that can be deemed "cock rock," can't hang on to their one female member.