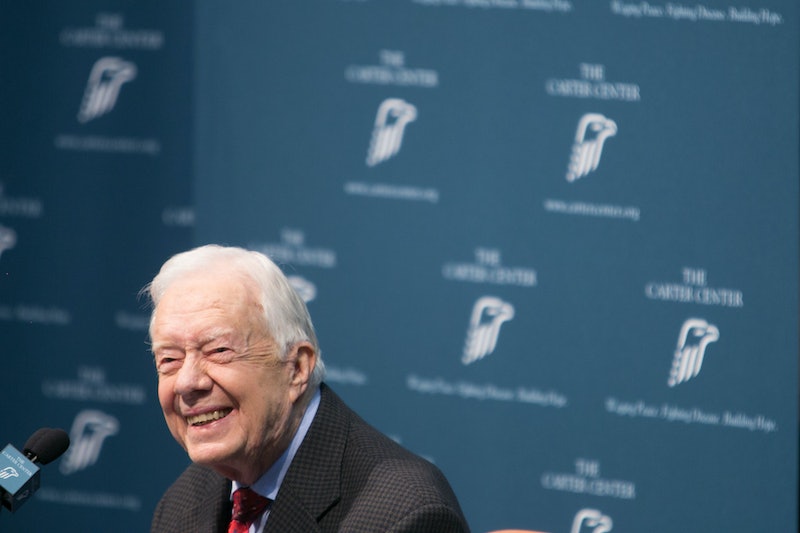 Cancer sucks, but if there's anyone who can beat it, it's Jimmy Carter. After first announcing his initial diagnosis on Aug. 12, the former U.S. president held a second news conference on Thursday to announce that the cancer, which had originated in his liver, had spread to his brain. On Thursday afternoon, in response to the bleak news, a group from the Friends of Jimmy Carter National Historic Site created signs with a perfect message of support for Carter and began placing them around his hometown of Plains, Ga., as a surprise for the family's return that evening.

With the same size and appearance of a regular political campaign yard sign, the green and black boards read "Jimmy Carter for Cancer Survivor." Jill Stuckey, a close friend of the Carter family who is also a board member for the historic site, first concocted the idea after seeing a cartoon by Atlanta Journal Constitution editorial cartoonist Mike Luckovich, which featured a couple hammering the same sign into their front lawn. The cartoon was first drawn up following the former president's announcement last week.

"It was late in the day when I found out," said Luckovich in a video statement this week. "[He's] such an important person to the world, to the nation, to Georgia, and ... I wanted to do something that was hopeful and simple, but something to let President Carter know that he's valued and that we're all thinking about him."

Taking inspiration from Luckovich's cartoon, Stuckey decided to turn the illustration into a reality. The only problem was timing. Although the group had been planning to plant hundreds of signs all across town since the week before, they couldn't act too soon, or the surprise would leak to the media. Either way, however, it was a sure bet that the group would achieve its goal.

"If we can put a smile on his face, it’s worth it," Stuckey told the Journal Constitution in an interview. In a comment to Albany-based Fox affiliate WFXL, she added, "We know if anybody can fight this disease and win, it’s going to be President Carter."

As of now, the signs, which have gone viral on social media, are not currently for sale — but that doesn't mean you can't make your own.

Go all out patriotic with a simple message for the former U.S. president, such as "We The People Support President Carter" (or whatever star-spangled message you can think of). Your sign doesn't have to be super-complicated either — just take a cue from these Massachusetts folks in 1976 and get out the art supplies.

Echo His Own Words

During his Thursday announcement, Carter told those in attendance at his news conference that he was "perfectly at ease with whatever comes." Show the Carter troop that you support them with a colorful call-back to the former President's speech, and post up a sign that reads, "Whatever comes, we're with you, too."

Whether you're religious or not, there's something to be gleaned from Carter's presidential words of wisdom. Get creative and chalk up your own sidewalk or workplace parking lot (make sure it's OK first) with a phrase about being a better human, such as this one, which Carter first used in an interview with author Michelle Nunn for her book, Be The Change:

My faith demands that I do whatever I can, wherever I am, whenever I can, for as long as I can with whatever I have to try to make a difference.

Sometimes, the best show of support isn't a sign at all. Do something for someone else, or donate to a cancer research institute in the former president's name. He may not see it, but someone else will — and really, isn't setting an example an even better way to spread the love?