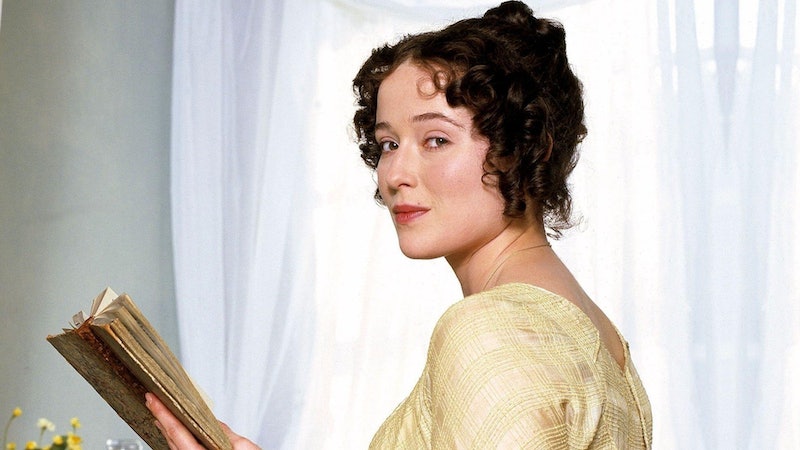 Jane Austen’s novels are about a lot more than just romances with turgid suitors. They’re also good humored critiques of some of the very serious issues of English society at the time and daring portrayals of bold intelligent women bucking the social constraints that would often see them silenced. This is one of the many reasons Austen is so loved by readers (and let’s admit it, the sweet romances don’t hurt either). But the other reason we all love to lose ourselves in Austenian England so much has a lot to do with how darn lovely it seems to live like lovable Lizzie Bennett.

Life just seems so much quieter and simpler in a Jane Austen novel, doesn’t it? (Of course, what we know about the realities of the era that Jane Austen was writing in is… a lot less pretty. But, hey, that’s why they call it fiction, right?) Even with the bratty little sisters in the Bennett household, or the vile narcissism of the Elliot household, all those slow country walks, grand balls, and those little cakes they serve with tea just make it all seem pretty darn idyllic.

But just because we live in a faster paced world where there’s more likely to be a big screen TV in every home rather than a piano forte doesn’t mean we can’t learn a few things from the great writer’s vision of the world and steal a tiny bit of that Austenian beauty for our own daily lives. There are more than a few ways to make your own life look more like a Jane Austen novel.

Write? By hand? On paper? Like with an actual pen? Your fingers might seize up a little at first as you re-acclimate your hand to the shape of holding writing utensil rather than flying free over a keyboard or the thumb-dominated writing you’ve grown used to. And yes, it will take longer. But find a quiet spot with a bit of sunshine, a decent pen and maybe even some good stationary, and you just might find that you’ve got a lot more to say to your friends/family than can fit into a couple of emoji'ed texts. Letters force you to slow down and you get to really think about what you want to say; they could do wonders for your relationships.

It’s one of the best traits of everyone’s favorite literary heroine Elizabeth Bennett. In the face of criticism and the ridiculous expectations of society, Elizabeth Bennet just laughs. For example, right after basically being called ugly by Mr. Darcy Lizzie “told the story, however, with great spirit among her friends; for she had a lively, playful disposition, which delighted in anything ridiculous.” Although Austen does write some serious characters — Anne Elliot and Fanny Price, famously — most of her leading ladies are pretty entertained by the ridiculous, and know how to laugh at things that might have others up in arms. Laughter takes the bite out of most things. So, next time you get trolled on Facebook, try the Elizabeth Bennett strategy instead….

For most folk from the U.S., tea is just a thing you grab at Starbucks when you’re trying to ween yourself off of your 7-cups-of-coffee-a-day lifestyle. For the ladies and gents of Austen novels, tea is a cultural necessity. Let’s not get into the details of “high tea” and the “proper’ fare to be served with tea here. But, basically, if you’re looking for a great way to break up your day with a peaceful routine, try tea! Invest in a cheap little tea set, find a place that serves “high tea” in your city, or just go out to a café and ask for a whole pot of tea. Then, put away your cell phone, and take an hour out of your day to just sit with your tea (and maybe a friend). Taking a little time to just stop and not be always doing something can make all the difference in a busy life.

If there’s anything the women of Austen novels teach us, it’s that you don’t have to go into full-on hiking everyday, kayaking every other day, nature woman status to enjoy a little quiet time outdoors. In pretty much every Jane Austen novel there’s a great deal of walking. That’s probably because travelling any other way was a bit more involved than just hopping in an Uber. Nowadays, you can get anywhere you’re going by any number of means of transportation. But imagine if you just took the time to walk instead? You miss a lot when you travel at high speeds, and you tend to feel always in a rush. But plan things out so you can walk to where you need to be and even if you’re walking to work through a construction zone., you’re very likely to feel more at ease. Oh, and you get some exercise while you’re at it!

Learn To Paint/Sew/Play Piano... Or Something Cooler

Hobbies! Ever notice how the women in Jane Austen novels all have some hobby or three to occupy them whenever they weren’t fighting off bad suitors and mean aunties? For the women of Austen, these hobbies tended to be sewing, painting, playing piano, and/or knowing some impressive number of languages. For them these were basically necessary trades to make them “accomplished” enough to earn wealthy husbands, but the husband-winning aspect aside, those are some pretty cool talents to rack up. And most of them are skills that force you to sit down, forget about your growing email inbox, and actually practice on the regular. Plus, as the Austen ladies know well, these skills turns out to make you pretty cool at parties.

Or as Oscar Wilde said, “If you want to tell people the truth, make them laugh, otherwise they'll kill you,” (The Nightingale and the Rose). Jane Austen's heroines are honest to a fault. Elizabeth Bennett manages to cover most of her honesty with a bit of wit, but even she gets straight-up rude with it sometimes. Now, you don't have to be mean or anything. But a little honesty, even if it stings a bit, goes a long way toward keeping things simple. If you don't have to keep track of what you're not saying to so-and-so about whatever then you can use all of that precious brain space for other, better things. And, as someone who suffers from chronic honesty, I can tell you from experience, your friends will actually thank you for it (after they're done being shocked), at least the ones worth keeping will. Not to mention, there are a number of Jane Austen character's like the infamous Isabella and John Thorpe from Northanger Abbey whose lies and flattery land them with standard villain fates.

Just Shut Up Every Now And Then

Or as Edmund Bertram says in Mansfield Park, “Let us have the luxury of silence.” With all the texting and tweeting and TVs and shallow conversation at parties, life can get pretty noisy. Nothing creates the sense of peace and quiet more than… peace and quiet. Just because most of your “talking” is happening online, and therefore not actually generating any actual sound waves, doesn’t mean it’s not making noise. If you want a taste of the idyllic scenery of an Austen novel, just unplug and hush up every now and then.

Be Your Awesome, Quirky, Slightly Neurotic Self

“Now be sincere; did you admire me for my impertinence?"

"For the liveliness of your mind, I did.” ― Jane Austen, Pride and Prejudice

Peace and quiet is all fine and dandy, but sometimes it’s time for dazzling wit and charm. If you fall on the socially awkward side of things (like I do), and “wit” and “charm” are like an alien language that can only be spoken by creatures with two noses or something, never fear! Not all of Austen’s heroines were as witty and charming as the famous Eliza Bennett. Yet, when it comes to conversation and society, each of them manages to dazzle with their own unique charms. So, whether you’re more of a shy Anne Elliot than a popular Emma Woodhouse, or more of an imaginative Catherine Morland than a sensible Elinor Dashwood, worthy conversation takes little more than being interested and interesting… You know the old adage to just be your damn self.

Be a patron of the arts! Plays, concerts, operas, ballets… they all still exist and in your city. You might not think you have time (or fund-age) for the likes of fancy things like operas, but instead of turning on the TV (you can always catch tonight’s episode of Scandal online later) for a two-hour marathon of whatever-comes-up-first-on-Netflix, head out to a play. Watching things live is a totally different experience than watching them on screen. And it doesn’t have to be some stodgy old play or a classical music concert either. There’s plenty of contemporary performance art out there, and some of it is even cheaper than your morning coffee.

Catherine Morland’s overactive imagination in Northanger Abbey might have been what got her into all that trouble... but it’s also what got her into all that trouble! From Catherine Morland’s naive trust in people and gothic daydreams to Marianne Dashwood’s romantic aspirations in Sense & Sensibility to Anne Elliot’s long-standing hopes in Persuasion, Jane Austen’s heroines are always letting their faith in the romantic get them into all sorts of confusions and a bit of trouble. But imagine their stories without it! Elizabeth Bennet would have been Mrs. Collins, and Catherine Morland would’ve returned home with little more than boring stories about the fancy clothes at the balls in Bath. So, what’s the harm in a little romanticism? It just might be what turns a boring day into an adventure.

Duh. I’d make the case, but Jane Austen and her heroines say it so much better: