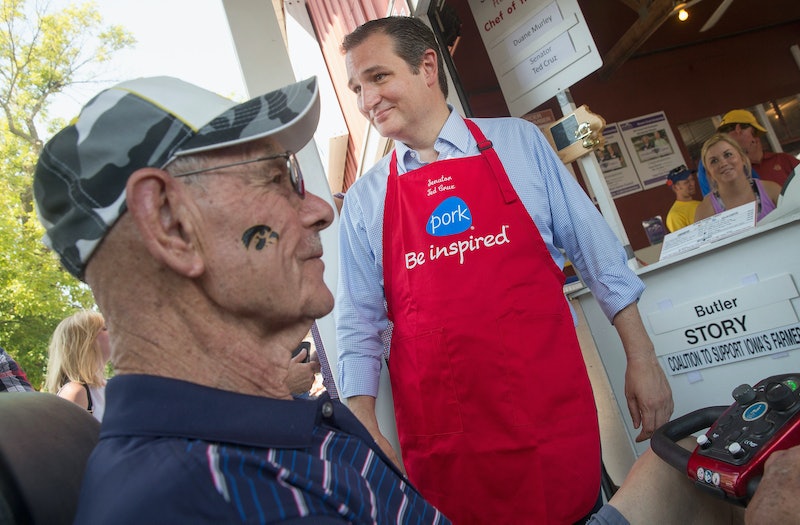 During a campaign stop at the Iowa State Fair on Friday, Ted Cruz was confronted by actress Ellen Page on his traditionally anti-LGBT stances while mingling with supporters. It was an awkward encounter to say the least, especially given that Cruz didn't seem to realize he was speaking to one of the bigger public voices in the LGBT advocacy movement. Despite the fact that Cruz has championed himself as a defender of liberty in the past, his response (or rather, non-answer) showed exactly how altogether ignorant he really was on the topic.

Taking questions from a large crowd surrounding an outdoor grilling station (how fitting), Cruz called on Page, who was dressed in a hat and sunglasses, in order to address what he likely figured would be a typical, friendly inquiry.

Page asked, "What about the question [of] LGBT people getting fired ... strictly for being gay or trans[gender]?" Cruz seemed taken aback by her question and stammered for a moment, pausing to collect his thoughts.

"What we're seeing now, is actually... we're seeing Bible-believing Christians being persecuted," Cruz answered. Page countered that they were simply being called out for discriminating against LGBT people, to which Cruz replied, "No, [it's because they're] living according to their faith."

Cruz then cited an instance in Grimes, Iowa, in which one couple, Mennonites Betty and Richard Odgaard, had refused to offer their bistro-slash-art gallery, Gortz Haus, as a wedding venue to a same-sex couple. After years of litigation between the couple's attorney, Eric Baxter of the Becket Fund for Religious Liberty, and the Iowa Civil Rights Commission, the business finally shuttered its doors due to financial difficulties from loss of business, despite paying out $5,000 in reparations to the gay couple.

"That is fundamentally wrong," said Cruz. "Imagine, hypothetically, if you had a gay florist ... and two evangelical Christians, and the gay florist said, 'You know what, I disagree with your faith, I don't wanna provide flowers' — "

"I would say they should provide the flowers," said Page, stopping him. Cruz then argued that it would be fair for the gay florist to deny the couple based on their faith and told Page that "there [would be] lots of other people [they could] buy flowers from" instead.

Cruz's parable conveniently left out the part where any religious group subjected to such behavior would likely have protested the business as well in an attempt to shut it down. Just take a look at any LGBTQ-friendly measure or ad campaign currently in the headlines for just a taste of what might occur should such a discriminatory practice actually happen.

After a Wells Fargo Bank commercial featuring a lesbian couple learning to communicate with their deaf daughter aired in June, for example, pastor and televangelist Franklin Graham angrily called for an all-out boycott of the bank, even going so far as to pull his personal accounts from the institution altogether. In a ranting Facebook post, Graham wrote,

Have you ever asked yourself–how can we fight the tide of moral decay that is being crammed down our throats by ... the gay & lesbian community? ... This is one way we as Christians can speak out—we have the power of choice. Let’s just stop doing business with those who promote sin and stand against Almighty God’s laws and His standards.

Thankfully, the protest didn't gain much traction — but the anger among the religious community was still strongly felt.

Bizarrely-constructed scenarios weren't the only thing on Friday's agenda, however. Unsatisfied with simply drawing up one poorly thought-out metaphor, Cruz attempted to offer another strange rebuttal to Page's pro-LGBT arguments. After calling out "liberal intolerance" for being anti-inclusionary and (again) for continuing the war on Christians, Page stopped him, suggesting that the left wasn't necessarily calling for persecution, but for increased civility and tolerance toward the LGBTQ community as a whole.

"I think it's more tolerance for LGBT people ... it used to be illegal," said Page. "People were thrown in jail, and we've come a really, really long way." Cruz, with a confused look on his face, asked her "who [had] been thrown in jail," not understanding Page's references. "Gay people," said Page, stunned.

Dismissing her concerns, Cruz remarked, "Do you know where gay people are being persecuted [more] right now?" He added that around the world, gay people were being killed by ISIS and Islamic terrorists. "[They're] executing people, and on the left, you hear complete silence."

Page argued back that his accusations were untrue, instead countering that LGBTQ individuals in many countries around the world were being killed by Christian groups as well. Cruz seemed unconvinced.

Page was correct: in countries like Uganda, where several American evangelicals espoused falsehoods about "curing" homosexuality and taught locals about "the gay agenda — that whole hidden and dark agenda" in 2010 (further prompting the all-out war on homosexuals that came afterward), or Jamaica, where gay individuals have routinely been beaten, driven out of their communities, and refused basic healthcare, LGBTQ communities often become martyrs for the cause of American-branded fundamentalism. But that sort of fact-based argument seemed to fly past Cruz, who instead countered,

Does it trouble you at all that you draw a moral equivalence between Christians in Jamaica and radical Islamic terrorists in ISIS who are beheading children? [Jamaica] may not be celebrating a gay pride parade, but they're not murdering people.

Until Cruz can get his facts together, he might want to avoid getting himself into arguments that he's simply too ill-equipped to handle.