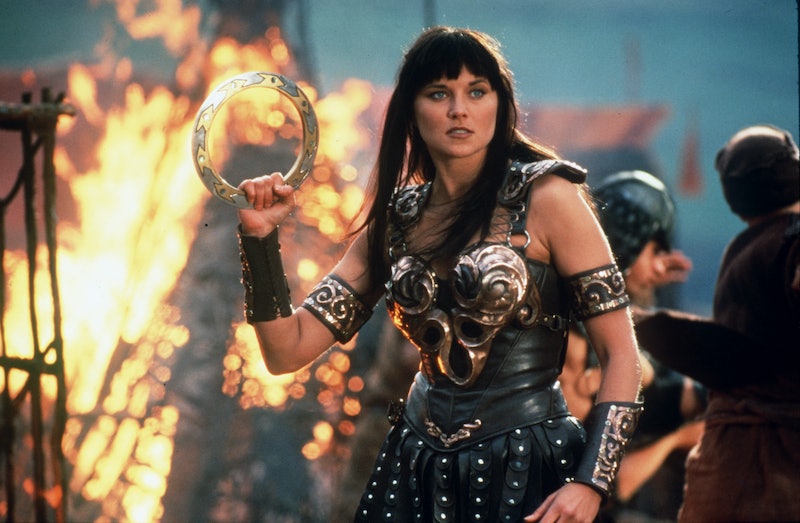 Xena, Buffy, the trio of gal pals on Friends — they all entered the TV world in the '90s. While the golden age of TV is said to have taken place during the reign of The Sopranos, Mad Men, and Breaking Bad, for women, the '90s produced the most indelible female TV characters. Whether they forever changed the zeitgeist like Dana Scully did, or simply inspired a young generation like Clarissa Darling did, the '90s were a golden age of TV too — a golden age for iconic women on TV. Narrowing down the importance of the awesome ladies who came to define strong female characters in the '90s is no easy task, though: Cultural importance and personal importance don't always line up, and there were so many richly drawn women on TV during that time that there was an awesome lady for everyone to admire. Inevitably, someone is going to get left off the list.

The 13 characters I have chosen resonated with me, personallu, on multiple levels. Either they gave me and everyone else who loved them serious life goals, or they reached a niche audience and deserve way more credit than they get for making TV a safe place for characters like Olivia Pope, Elizabeth Jennings, and Jess Day to flourish. TV wasn't perfect in the '90s, but these women were about as close to perfect as TV has ever gotten.

Who else could possibly kick off this list? Buffy Summers roared to life and flipped the horror genre on its head. Suddenly, the blonde cheerleader was saving the world. A lot. Buffy wasn't just important because she was the chosen one, she was important because she was the chosen one and she had to try and make good grades, navigate dating, build friendships and fight vampires. Buffy showed a generation how to find the power within themselves. Slayer or not, she was all about defying limitations.

Scully is so epic, her story is still being told over 20 years later. As the voice of reason to counter Mulder's "believe anything" mantra, Scully was TV's strongest advocate for science. A doctor and an FBI agent, she chose to go on a journey with Mulder that led her through a battle with cancer, the loss of two children, and several powerful epiphanies about herself. Despite this, Scully never once stopped fighting no matter what kind of hell she faced — and as a result she will never stop being a hero to women of all ages.

TV has never had an easy time of capturing what it truly feels like to be a teenager: My theory is the experience is so fraught and borderline traumatic, most people try to block it out. Angela, however, is hands down the most authentic teenager to ever grace the small screen. She was confused about pretty much everything, prone to infatuations with mysterious boys, insecure, brave, frustrating, and wonderful all at once. My So-Called Life didn't last for long, but no one should forget about Angela.

Rachel, Monica, and Phoebe provided each other with a rich support system that resonated with women of all ages. Whether they were drinking beers while wearing wedding dresses, performing cleansing ceremonies, or going into business together, these three women always had each others backs. Even cooler is that for multiple generations now, women have grown up identifying with at least one out of the three ladies because they were all so wonderfully unique and yet relatable at the same time.

Xena kicked all of the butt, basically, and she brought a sense of heroism, justice, and power to TV that is hard to replicate. Along with the also amazing Gabrielle, Xena went on a hero's journey and became a cultural touchstone in the process.

I have always loved how Lisa is unabashedly passionate about school and the arts. Even now, so many years after The Simpsons first premiered, Lisa remains a worthy role model for girls and women who lead with their brains and their hearts.

I'm not sure there is a single social subject that Moesha didn't tackle while she was busy navigating high school. Her struggles and triumphs always felt real. (Add in the part where she dated Usher, and Moesha also represented all of my life goals.)

Where would '90s youth have been without Clarissa? She was a tech savvy gal who literally explained the world to tweens begging for real answers to life's greatest mysteries like "Why are little brothers so annoying?" and "Can I actually die of embarrassment?" Considering she was a free spirit and activist in training with a killer sense of style, it's no mystery why she's still beloved.

ER kept going after 2000, but when Carol left, so did my heart. Her character wasn't supposed to become a '90s icon, but no one wanted the nurse who attempted suicide to die in the first episode. Carol battled depression and made the world a better place. She gave people hope and there's no greater gift a character can give.

Once upon a time, there was a girl who embraced her weird and she grew up to be an awesome lawyer lady who will now inspire another generation by being the coolest mom ever on Girl Meets World. That girl was Topanga Lawrence, and she has never, ever stopped being exactly who she is.

You got it, dude! Little Michelle wasn't just a great child character, she was a great character, period. She could be sassy, selfish, and extremely giving — all at once.

Jessie was the first person to teach me about feminism (and the dangers of too much caffeine). Also, her focus on women and equality always made her stand out from the other characters at Bayside.

There was a time when the only thing a woman could be on TV was perfect — but Roseanne blew that idea to pieces. Her house was never clean, she had money troubles, her parenting style was rough around the edges, she was funny, and completely in touch with the realities of what it was like to struggle to have a good job, feed your kids, and not let anyone push you around. Roseanne flipped the script on TV motherhood and changed the landscape for the better.

These characters, along with so many others in the '90s, just go to show that all of the '90s nostalgia going around is totally warranted — especially if you are a fan of awesome women on TV.