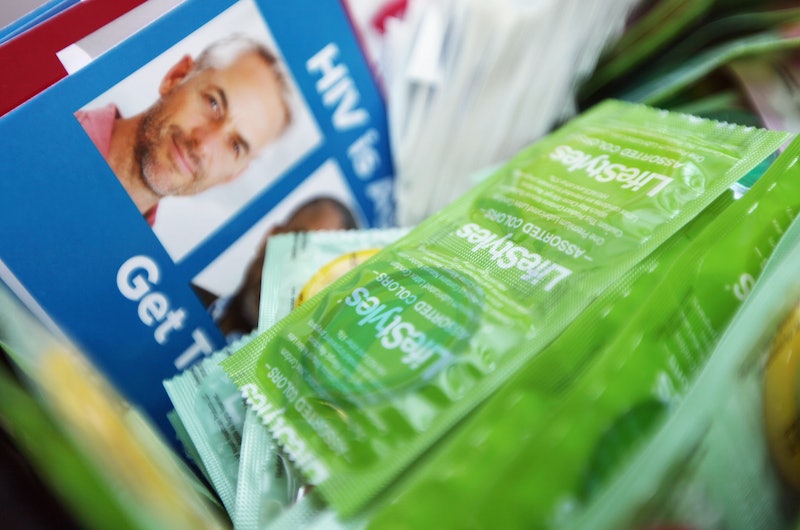 Sex ed in America is not what you would call ideal, with 35 percent of sex ed programs in the United States requiring that sex education teach abstinence as the only option for unmarried people. However, apparently for at least one school district abstinence only sex ed doesn't go far enough — Gilbert, Ariz., schools now attach abstinence stickers to their biology textbooks. Just in case the students didn't already get the message.

In the state of Arizona, schools are not required to provide sex ed, but the law does mandate that when sexual education is provided, abstinence must be stressed. And that's just what Gilbert's school district does. However, last year several parents complained — not about how the sex ed curriculum was failing to properly educate their children about information they'd all almost certainly need to know in the future, but about the fact that the biology textbooks apparently do provide some actual, useful information about human sexuality.

Those darn science books containing scientific information! Who told these textbooks that it's their job to educate children anyway?

The district considered removing the relevant pages from the books, as parents requested, but were concerned that doing so might violate copyright law. So instead they took the summer to come up with a different solution, and eventually created stickers to put on the cover of each book.

The photo of the stickers were uploaded by author Suzanne Young on Twitter after her son came home with the biology book. Plenty of people joined her in criticizing this new policy, though; Young received an onslaught of angry and harassing tweets from those who seem to agree with the policy. Currently, Young's Twitter account seems to have been deactivated.

The fact that this school district feels the need to promote abstinence even on biology text books is sad for any number of reasons. Decades of research into the effectiveness of abstinence-only sexual education has virtually all supported the same conclusion: It doesn't work. From the fact that teens who receive abstinence only sex ed have a higher rate of teen pregnancy to the fact that teens who undergo abstinence only sex ed don't start having sex any later than their peers in comprehensive sex ed programs, there is very little evidence to suggest that abstinence-only sex ed actually prevents teens from having sex, and plenty to suggest it is actually harmful to them once they start. In fact, the sheer amount of evidence to this effect is staggering.

But what makes this sticker even more galling, besides simply propping up what has been shown to be a failed and harmful approach to sexual education, is the fact that it involves not a sex ed program but a science book. The textbook in question is simply providing modern, medically accurate information relating to human sexuality, information that students will undoubtedly need to know at some point in their lives. Even parents who don't want their kids having sex as teens should be able to recognize that knowledge about sex will serve them well at some point in their lives, right?

However it seems that insistence on stressing abstinence literally every time the topic of sex comes up has reached such a degree that even science textbooks must come with a note telling kids not to have sex.

I'm sure this will work out very well for everyone.

If you're a student or former student from Gilbert, Ariz. — or any of the other hundreds of school districts where you weren't taught anything about sex other than "Don't" — you can find resources here, here, and here.