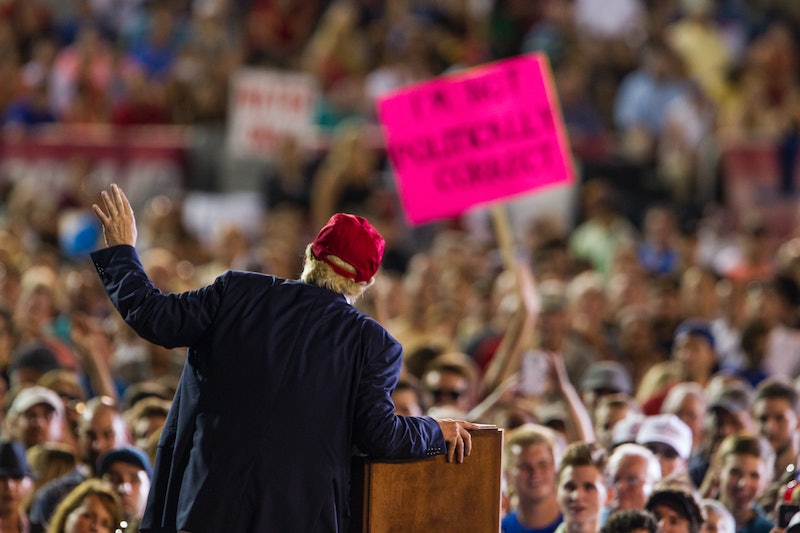 Donald Trump, the billionaire business mogul currently vying for a place in the White House, is somehow still in the lead of the GOP pack. Go ahead, say it with me: "Huh?" The Donald made a campaign stop in Mobile, Ala., on Friday night, drawing a huge crowd to the spectacle. According to multiple reports, a crowd of around 30,000 attended the Trump rally, applauding wildly as the brash 2016 hopeful took the stage while Lynyrd Skynyrd's "Sweet Home Alabama" played in the background.

Those are big numbers. They're so big, Yahoo News reported, that the Trump campaign was actually forced to switch venues at the last minute, swapping out the Mobile Civic Center arena, which seats around 10,000, for the nearby Ladd-Peebles Stadium, generally used for high school football games.

"I know how Billy Graham felt," Trump joked to the crowd.

For context, Hillary Clinton's initial campaign kickoff speech back in June drew a crowd of 5,500. Topping that, a campaign rally in Portland, Ore., on Aug. 9 for Vermont Sen. Bernie Sanders commanded a rousing crowd of around 28,000. On the GOP side, Wisconsin Gov. Scott Walker was able to draw a crowd of around 5,000 at his campaign announcement outside of Milwaukee, and though Texas Sen. Ted Cruz seemed to fare considerably better with a kickoff rally attendance of around 8,000 at Liberty University's Vines Center this past March, the Republican hopeful came under heavy criticism when it was discovered that the crowd was made up almost entirely of students who were required to be there under the religious school's strict honor code (a few of whom even dressed in Rand Paul T-shirts... burn).

None of those numbers even came close to Trump's 30,000, the majority of whom were more than eager to defend Trump's largely empty speech, in which he proclaimed his own book, The Art of the Deal, was second only to the Bible and insisted that he would "be great at" the U.S. military. He also exclaimed:

If this were another country we could maybe call for an expedited election. Can we do that? I’d like to have the election tomorrow, I don’t want to wait.

Without a doubt, Trump's rally drew in a huge crowd — but numbers wise, he's still got some worthy competition. Here are just a few crowds that were bigger than Trump's:

These are not the typical celebrities that draw a crowd, but they certainly know how to do it. During this year's nerd-infused festivities alone, the comic and pop culture convention's attendance numbers topped 130,000 — and that's not even counting all those in attendance that didn't actually have badges for the convention center. At nearly four times the number of people as Trump's gathering on Friday, the nerds won this round easily.

Americans love football, and this year's Super Bowl was no exception. With a crowd of over 70,000, according to NBC Sports' Sunday Night Football, Trump's rally looks relatively tame in comparison. Of course, there's something to be said for the fact that a braggart politician can pull in nearly half the numbers as one of the year's most-hyped events, but that might be due to the fact that, at both events, you can watch a full-grown man pass the buck—er... ball.

A 2013 TEA/AECOM Theme Park Attendance Report suggested that Walt Disney World's Magic Kingdom theme park averaged an attendance rate of 53,000 per day in 2013. In June 2014, the park calculated the total year end attendance numbers at around 18.6 million. It's a funny coincidence too, if you think about it. Disney World is known as the happiest place on earth, while a Donald Trump campaign rally could easily be considered the most depressing.

Considering this year's historic SCOTUS ruling, which opened the doors for same-sex couples across the nation to finally marry, there was no doubt that the attendance at the gay pride parades that followed would be momentous. Across four major U.S. cities, including Seattle, New York, San Francisco, and Chicago, local authorities reported hundreds of thousands of marchers and supporters lining the streets, with an overall nationwide total likely in the millions. If there were ever a crowd fully capable of drowning out Trump's unsettling and racist speech, it's this one. Do you think they can be booked ahead of time?