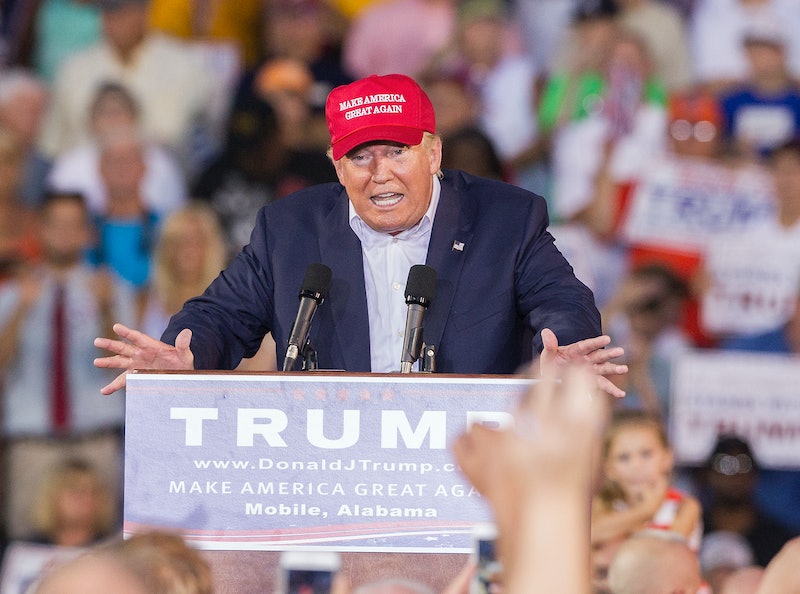 With each passing week and each new poll with his name plastered at the top, the era of "Trump: Republican Presidential Frontrunner" feels less like a dream and more like an enduring reality. One we'll all have to live with for a while, at the very least. Unfortunately, this means that the man at the center of the GOP race has a troubling record on women and sexism. And for the sake of basic human decency, both men and women everywhere ought to say no. After all, there are more than enough awful Donald Trump quotes that ought to piss off everyone out there; it's just a matter of whether anyone takes these things seriously.

It's always important for both men and women to directly acknowledge when someone is acting on (or sometimes in the case of politicians, playing to) sexist impulses. Women shouldn't be forced to do all this work alone. And amid a GOP presidential field that's already dire straits on a lot of women's issues, nobody's flashed quite such an unflinchingly sexist attitude as Trump.

It's not even just about policy — Trump's story is also about his wildly offensive, no-apologies style, and how much naked condescension and meanness we're all willing to accept in a presidential contender. Here are five Trump quotes that laid bare some major ignorance.

Back in 2011, columnist Gail Collins shared a strange, telling story in The New York Times about an angry correspondence she received from Trump. After Collins needled Trump about the size of his fortune, she says that he sent her a copy of her column with a little notation added:

During one down period, I referred to him in print as a “financially embattled thousandaire” and he sent me a copy of the column with my picture circled and “The Face of a Dog!” written over it.

One often overlooked part of this story is Trump's letter to the editor, responding to Collins' story. He never makes any denial relating to the "dog" comment, but he does call Collins' columns "nasty and derogatory," impugns her talent, then launches into a full-throated defense of birtherism — which, lest you forget, he still believes in.

Everybody meets somebody now and then whom they just don't like. The only real question is how you handle that time when it comes. Do you behave with class and restraint, or let the venom fly? In the case of Trump and Rosie O'Donnell, comedian and former co-host of ABC's The View, he decided to go with the latter.

Here's some of his vicious 2006 rant against O'Donnell, parts of which Fox News' Megyn Kelly asked him about during the first GOP presidential debate:

Well, Rosie O'Donnell's disgusting, both inside and out. You take a look at her, she's a slob, she talks like a truck driver ... Rosie attacked me personally because I was very happy when her talk show failed ... Another thing that failed, and this was a real monster, everybody was suing her, was her magazine. her magazine called Rosie was a total disaster. So I love it, I gloat over it, I think it's wonderful, because I like to see bad people fail.

... Well, if I were running the view, I'd fire Rosie. I'd look her right in that fat, ugly face of hers and I'd say "Rosie, you're fired" ... We're all a little chubby, but Rosie's just worse than most of us. But it's not just the chubbiness — Rosie is a very unattractive person, both inside and out ... Rosie's a person that's very lucky to have her girlfriend, and she better be careful or I'll send one of my friends over to pick up her girlfriend, why would she stay with Rosie if she had another choice?

During the first, Fox News-hosted GOP debate, when Kelly questioned Trump about his past use of sexist invective against various women — "fat pigs, dogs, slobs, and disgusting animals," she recounted — his response was about as bad as it gets:

The big problem this country has is being politically correct. I've been challenged by so many people, and I don't really have time for total political correctness, and to be honest with you, our country doesn't have time either. This country is in big trouble, we don't win anymore, we lose to China, we lose to Mexico, both in trade and at the border, we lose to everybody. And frankly, what I say, and oftentimes it's fun, we're kidding, we have a good time. What I say is what I say. And honestly Megyn, if you don't like it, I'm sorry. I've been very nice to you, although I could probably maybe not be based on the way you've treated me, but I wouldn't do that.

In a July interview with NBC, Trump turned in a prototypically rude, boorish performance, at points speaking demeaningly to interviewer Katy Tur. He called Tur "a very naive person," among other things. And when she stumbled in asking a question, he decided to let the hostility fly:

5. "Get Yourself A Different Woman"

As Vox detailed last week, there's an interesting clip on YouTube of Trump talking about the legendary Orson Welles film Citizen Kane. It's widely considered one of the best films ever made, and it contains some cautionary messages for any other impulsive, egocentric businessmen-turned-politicians out there.

While Trump holds it together decently enough, he fumbles back into good old woman-blaming right at the end, when he's asked what advice he'd give the movie's namesake main character: "Get yourself a different woman." Without wanting to spoil anything about this classic, suffice it to say that anyone who blames Charles Foster Kane's problems on Susan Alexander is missing the point badly, and in a pretty telling way.

More like this
10 Times Diana & Meghan Spoke Similarly On The Royal Family
By Sophie McEvoy
Photos Of Boris Johnson Drinking At A Downing Street Lockdown Party Have Surfaced
By Bustle UK
How The City Healed Five Years On From The Manchester Arena Attack
By Ella Glover
Sandra Bullock, Girlboss Extraordinaire
By Matt Harkins & Viviana Olen
Get Even More From Bustle — Sign Up For The Newsletter