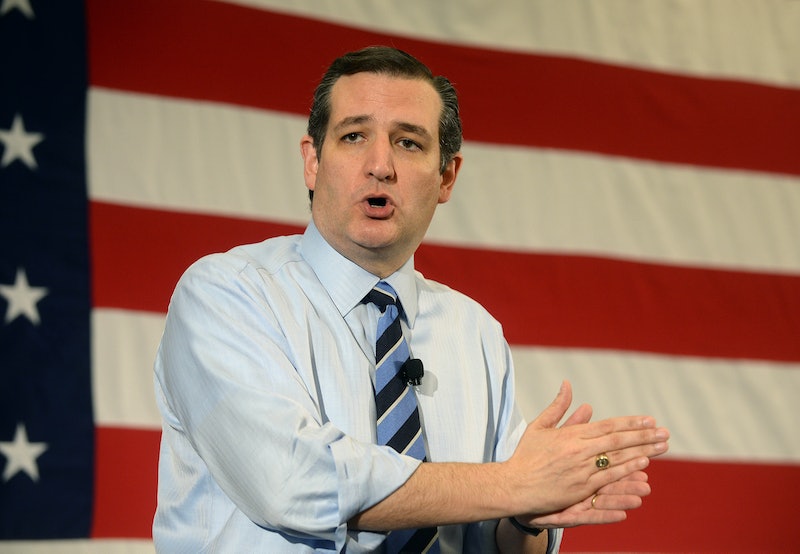 Well, here we are again. It's starting to look like there's a couple of GOP presidential candidates who aren't much for sensing the right timing — Ted Cruz and Chris Christie criticized Jimmy Carter in a pair of stump speeches on Saturday, a rather awkward fact given the former president's recent disclosure of his brain cancer. Carter, 90, went public with his diagnosis on Aug. 12, but it wasn't until Thursday when he announced some additionally dire news — that his melanoma has spread into his brain. Carter is undergoing treatment in Georgia, and he's reportedly receiving a brand new drug, as well as undergoing radiation treatment.

Addressing supporters at an Americans For Prosperity event in Ohio on Friday, as detailed by NBC News, Cruz ran down his derogatory assessment of the Obama and Carter eras.

I think where we are today is very, very much like the late 1970's. I think the parallels between this administration and the Carter administration are uncanny, same failed domestic policy, same misery, stagnation and malaise, same feckless and naive foreign policy. In fact, the exact same countries, Russia and Iran, openly laughing at and mocking the president of the United States.

Cruz has since given a comment on the matter, insisting that "we can always have a discussion about public policy." He also tweeted out a message of support for Carter on Friday.

That, conversely, was a nice gesture, although it's hard not to look a little callous when you're tweeting well-wishes on the one hand, and calling a person's legacy "misery, stagnation and malaise" on the other.

Christie, on the other hand, was speaking at the Iowa State Fair on Saturday, and he also clearly decided to dip into that well of time-worn Jimmy Carter lines — he stated that President Obama "makes Jimmy Carter look strong," according to Politico. Whatever you think of Carter's politics, and whether or not you believe it's an innocently awkward mistake on Christie's part, that is not great.

As far as track records go, however, Cruz is the person with the most troubling history with this sort of thing. Back in early June, he infamously took a shot at Joe Biden while on the campaign trail, just days after Biden's son Beau had tragically died of brain cancer. It was an especially mean, simple-minded joke, as well.

It's not that there's necessarily active, malicious intent on Cruz's part in either case — he apologized after the Biden remark, though that hasn't been forthcoming in this latest case. The truth is, both Carter and Biden have been condescendingly reduced to cheap laugh lines within the GOP base for years, so it's not that surprising that Cruz and Christie didn't think to switch it off.

But regardless of whether it's just a reactive flub rather than a planned barb, this is the kind of tone-deafness that could be a problem if either of them ever made it to the next level. Carrying yourself with some tact and empathy is usually a benefit for a presidential aspirant, and these sorts of snafus send a starkly opposite message.