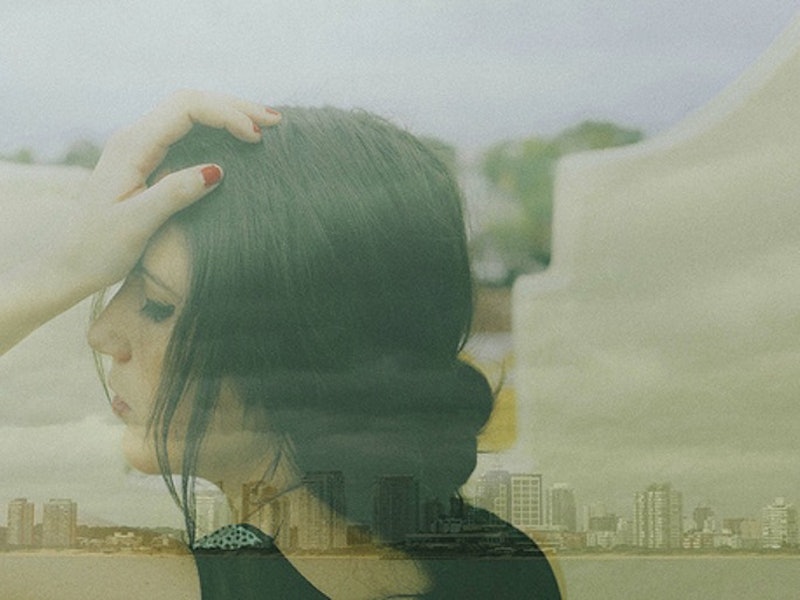 Everyone has their moments of feeling anxious or nervous — whether we're freaking out over a big test, a presentation at work, or meeting your significant other's family for the first time, I think we can all agree that regular life can get pretty stressful sometimes. But while most people will get through their stress-inducing event and then go back to feeling like themselves, people with anxiety disorder live in a constant state of nervousness.

Anxiety disorder is the most common mental illness in the United States — it affects approximately 18 percent of the population — and living with it can make even the most mundane tasks feel like taking your scariest final combined with asking your boss for a raise. Even though anxiety sufferers know intellectually that most of our concerns aren't rational, it doesn't stop us from feeling anxious all sorts of seemingly not-nerve-wracking issues, from choosing a restaurant to driving somewhere new for the first time.

Although people's specific triggers vary, anxiety generally makes many everyday tasks feel overwhelming. Avoidance is a common symptom of anxiety disorder — many anxious people would understandably prefer to stay home where it feels "safer" and where we can feel more in control of our surroundings and company. Although a combination of talk therapy and medication can be hugely beneficial, anxiety isn't something that will simply "go away." Instead, we have to learn how to deal with it, push ourselves to not let the disorder prevent us from living our lives, and do our best to not listen to that irrational voice in our head that tells us humiliation and discomfort lurks around every corner.

So how does it feel to just try to live your life with anxiety disorder? The seven examples below should give you an idea:

1. Waking Up & Getting Ready For The Day

The moment you wake up, your first thoughts race to the day ahead and all the things you should be stressing out over. That recurring departmental meeting at work that you are extremely prepared for? You're probably still not prepared enough and you're going to get asked a question you can't answer. Then you'll look like a complete fool in front of all your colleagues. And are you completely sure you reserved the conference room that you were supposed to? I mean, you did confirm approximately 10 times, but that doesn't mean you didn't somehow screw it up.

2. Actually Getting Out Your Front Door

A very average, unremarkable day can feel like an overwhelming hurdle when you have anxiety. There are just so many little things to worry about — so it's totally understandable that you may dread leaving the comfort of your apartment. You know that the workplace and social gatherings are full of potential triggers — while staying in with Netflix and a good book is pretty safe.

Sure, you need to keep showing up for your job to keep paying for those books and Netflix, but really, wouldn't it be so much easier? Whether it's a weekday or a weekend, the outside world is an anxiety-inducing place and it's hard to get psyched to enter it.

3. Dealing With Your Morning Commute

Personally, there's nothing that amps up my anxiety quite as much as being forced to drive anywhere. It's a good thing I'm a city person, because every time I head home to the suburbs and am forced to get in my car ( a necessity in order to engage in any activity taking place more than a block away from my parents' house), my anxiety sets in. What if I get lost? What if my car breaks down and my phone dies at the exact same moment?

Although I much prefer public transportation, it certainly comes with its own set of struggles. I lived in New York City for five years, and even though I took the subway at rush hour every day, doing it never stopped making my heart race. I was consistently nervous that I wouldn't be able to force my way through the crowds once I got to my stop and would be unable to get off the train, that I would end up accidentally stuck in another borough, and a bunch of other nonsensical concerns. For the record, none of my fears ever actually came to fruition — but did that stop me from worrying every single day? Heck no!

4. Conversing With Casual Acquaintances Or Colleagues

People with anxiety (or any other mental illness) are 100 percent capable of having close, healthy relationships with friends, coworkers, family members and romantic partners. When you're totally comfortable with someone, your anxiety is less likely to rear its ugly head.

But making small talk with casual acquaintances or colleagues can be incredibly stressful for people who struggle with anxiety — both in the moment and when you're inevitably overthinking it afterwards (frequently worrying and thinking negatively about past events, a psychological phenomenon called "rumination," is a common sign of anxiety). Many anxiety sufferers get super nervous about saying the "wrong" or "stupid" thing, and this may result in talking too much or very little, depending on how exactly your social anxiety manifests itself. Whether you talk a lot or not at all, you can rest assured that you'll beat yourself up over it afterwards, because you'll feel certain that you just made a terrible impression.

When your close friend asks you to come to his or her social gathering, you don't want to say "no" — they've spent days planning and organizing it, and not showing up because you're nervous about talking to people would hurt their feelings. But when you get there, realize that you don't know anyone else there, then also realize that you can't monopolize the host for the entire evening, you may find yourself in the position of needing to introduce yourself to some of the other attendees. Again with the small talk! It shouldn't be this stressful, but it is. No matter how friendly someone is, you'll have the nagging concern in the back of your head that they would rather be doing anything else rather than speaking with you.

For many people with anxiety, small social gatherings with close friends are way more comfortable than larger events. But making decisions is a huge stressor, so even when you're psyched to get in some quality time with the people closest to you, you dread when it's your turn to pick a restaurant or happy hour spot. Even though you're just going to be hanging out to enjoy each other's company and catch up, you suddenly feel as though you're responsible for everyone else's happiness, and like everyone will be let down if you don't choose correctly. So you've been known to spend hours on Google and Yelp while you try to find a place that promises to be both amazing and within everyone's budget. It's exhausting.

No matter how tired you may feel, night can be the prime time for your anxiety to kick in. In fact, insomnia is one of the diagnostic criteria for most anxiety disorders. You have no real distractions as you get ready for bed, so your mind naturally wanders to countless nonsensical worries. It's the perfect time to replay your entire day in your head and kick yourself over every "wrong" or "stupid" thing you think you did or said. Once you're done obsessing over that, it's time to move on to getting nervous about tomorrow. Even if you have the most ordinary day ahead of you, you'll find something to stress over — just like you always do.

More like this
5 Crystals To Lower Your Anxiety
By Megan McCarty
15 Ways To Tell Someone Was Just Talking Behind Your Back
By Carolyn Steber
I'm Going Off My Bipolar Meds to Try to Get Pregnant
By Anonymous, as told to Anna Goldfarb
An Honest Review Of The TikTok-Famous WalkingPad
By Kaitlyn Wylde
Get Even More From Bustle — Sign Up For The Newsletter