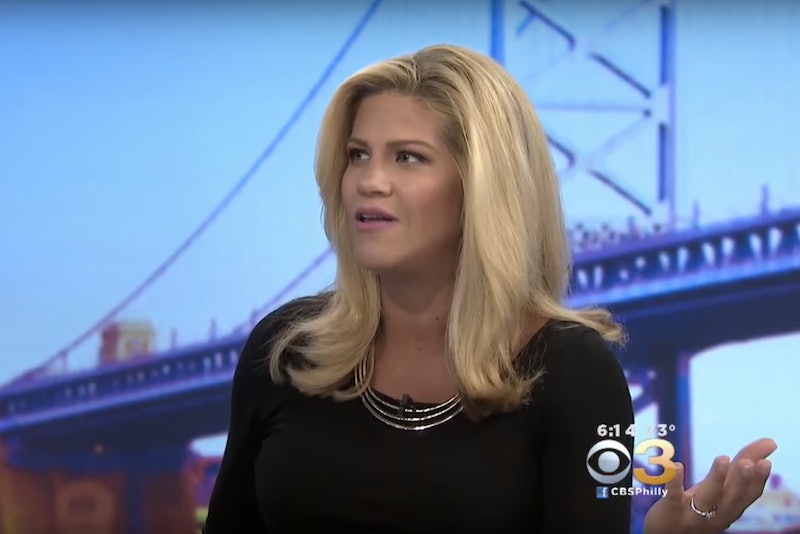 This local Philadelphia TV meteorologist won't stand for body shaming. After receiving dozens of unsolicited, hurtful comments over the size of her pregnant belly, Katie Fehlinger, a pregnant meteorologist at CBS 3 Philly, finally had enough. The expecting woman took to Facebook to shut down her critics in the best way possible — and you have to read her amazing response.

Fehlinger is in her third trimester with twin girls, and looks like many other happy, healthy moms-to-be. Yet apparently, some viewers didn't think so. They began hurling criticisms at her by way of social media, accusing her of being "too pregnant" to be on air. Seriously? As if fat and skinny shaming aren't bad enough, now pregnant shaming is a thing? Talk about a new low.

After being compared to a "sausage in a casing" and getting insults that read "sticking your pregnant abdomen out like that is disgusting," Fehlinger finally decided to speak up. The CBS 3 newscaster shared a "little manifesto of sorts" on Facebook to remind both critics and fellow expecting women that there's absolutely nothing wrong with pregnancy bodies.

"Even during the most uncomfortable — and let's face it, less than glamorous — symptoms of pregnancy, what women go through to bring their precious children into the world is, simply put, AMAZING and you should be lauded," she wrote. Amen to that. Instead of applauding Fehlinger for continuing work while well into her pregnancy, viewers decided to bash her? What is that about?

Fehlinger also later added, "Frankly, I don't care how 'terrible' or 'inappropriate' anyone thinks I look. I will gladly gain 50 pounds & suffer sleepless, uncomfortable nights if it means upping my chances to deliver 2 healthy baby girls."

The post has gotten more than 50,000 likes, and thousands of shares. It's also inspired other women to share words of support and photos of their own pregnant bellies, with the hashtag #CBS3.

Fehlinger told CBS 3 that she believes her post struck a chord with audiences because it's so relatable, and I have to agree. How many times have you signed on to social media, and seen terrible comments aimed at a woman's figure? Probably far too many times to count.

That's why it's so important that women speak up and put the critics in their place, like Fehlinger did. Hopefully, she will inspire others to stand up for themselves, so we can spread a message of acceptance and put an end to this body shaming once and for all.

More like this
Is TikTok’s “Villain Era” Trend Just An Excuse For Bad Behaviour?
By Chanté Joseph
Here’s What Sarah Jessica Parker’s Canned Cosmo *Actually* Tastes Like
By Emma Garza
TikTok's Favorite Bartender Thinks Mimosas & Bloody Marys Are Out For Brunch
By Alexis Morillo
How To Decorate Your Home Like A Coastal Grandmother
By Emma Garza
Get Even More From Bustle — Sign Up For The Newsletter