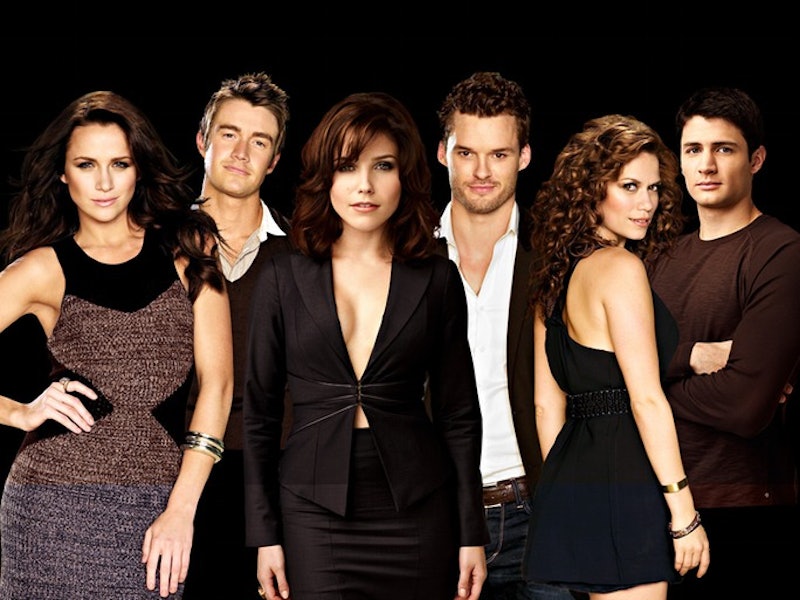 It's time to take a trip down a road of glorious early 2000s nostalgia, because select cast members of One Tree Hill reunited for a night of debauchery. OK, "debauchery" might be an overstatement, but judging by the smattering of shot glasses, brewskies, and a snoozy Bethany Joy Lenz, everyone was clearly in rare form. Sophia Bush posted a photo to her Instagram on Sunday, Aug. 23, where the actress smiled amid her costars and bestowed me with the greatest case of FOMO imaginable. It should be noted that OTH alum — and former Laguna Beach heartthrob — Stephen Colletti was front and center for the photo. I only wish Lauren Conrad and Kristen Cavallari had been present to photobomb this epic group shot. In that case, my mind would truly be exploding right now, rendering me unable to type more than a jumble of letters and emoticons.

Bush captioned the photo: "Peanuts (and one sleeping beauty) #longday #greatday #fam #likeitwasyesterday #pickuprightwhereweleaveoff #hitmewithyourbestshot #purplereign," proving that she may be the most epic dispenser of hashtags imaginable. For avid fans of the former CW smash hit, the post is sure to ignite a flurry of squees. It appears that one of my favorite television ensembles is just as tight off-screen as their characters were throughout nine seasons — minus all the melodrama.

As was the case with other angsty hits from the early 2000s, many of the histrionics and contentions displayed throughout various story arcs on OTH were also peppered with life lessons that had true depth, and proved relatable to the viewers. Despite all the fights, cheating, and lies that took place — and thoroughly entertained fans, mind you — on OTH, the series was also deft in underlining the importance of friendship. Any relationship in life can become fraught with discord, but sometimes these conflicts can also make a friendship stronger. In celebration of this iconic series — and cast reunions — let's take a look at seven lessons OTH taught us about friendship.

1. Violence Is Never The Answer

Even the best of friends on OTH weren't safe from the occasional catfight. Although these moments made for great entertainment (hi, Brooke and Peyton), any issues were only exacerbated by two people going fisticuffs. Take a breather before you need to confront someone.

Was I the only one that shipped the platonic relationship between Brooke and Peyton harder than any romantic Brooke/Lucas or Peyton/Lucas pairing? Clothes before bros, people!

3. A Good Friendship Can Endure Pretty Much Anything

If Deb and Karen could find friendship throughout things like sharing the same baby daddy and — oh yeah — attempted murder, then we can all find a way to keep our valued friendships intact.

4. Melodrama Isn't Worth Ending A Friendship Over

One thing that OTH conveyed especially well was the anguish that can come while being on the cusp of adulthood. Emotions soar, feelings get hurt, and confusion abounds. It's easy for conflicts to transpire during these times, but don't allow the rough patches to completely annihilate a worthwhile friendship.

Even if the truth hurts, it's better to get things out on the table rather than avoid an issue.

We all make mistakes! When it comes to friendship, forgiveness can be key. Obviously, you don't want a relationship that is more give than take, but being able to accept differences and put pride aside at times is integral.

7. Being In The Friend Zone Can Be OK

Although the friend zone is typically a place we all dread being relegated to, sometimes it's not so bad. In fact, strong platonic bonds can come out of being able to accept this status. Moreover, you can never have too many friends, and hanging on to a relationship that wasn't meant to take a romantic turn can leave you open to the right one that is.

Let's hope for several more cast reunions to make their way onto our social media feeds. Until then, I have a date with my Netflix account, where I'll be re-watching this series in its entirety.