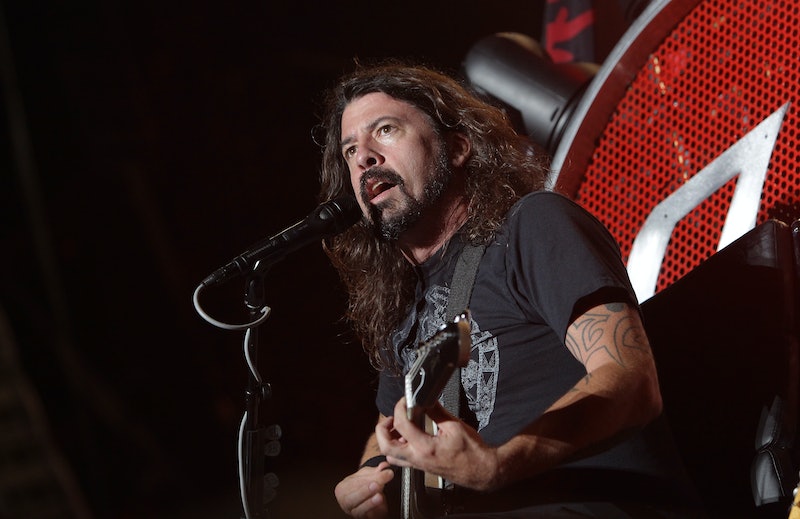 In what might be the coolest prank ever, the Foo Fighters Rick Rolled the Westboro Baptist Church when members of the hate-spewing organization protested the band's concert at the Kansas City Sprint Center on Friday, Aug. 21, before their performance. The band, led by lead singer Dave Grohl, got in the back of a pickup and rode through the protest, with Rick Astley's "Never Gonna Give You Up" playing on the speaker system.

Amidst the protests and signs from the hate-filled church that said things like "God Hates Proud Sinners" and "No Special Laws 4 Fags," Grohl and his bandmates blasted the 80s classic song, held up a sign that said "You Got Rick Roll'd." and invited fans to join in on the protest of the protest. According to Entertainment Weekly, this is not the first time the band has pulled a prank on Westboro. In 2011, The Foo Fighters made a music video singing a country song they made up called "Keep It Clean," once again in Kansas City. While performing the song in the video, Grohl stated:

This is just the latest time that the Foo Fighters have been outspoken about various topics, especially those involving social issues and the music industry. Dave Grohl has been incredibly open about supporting LGBTQ rights in the past. In 2009, he showed his support for whiteknot.org by donning a white ribbon for same-sex love and solidarity.

Grohl talked about whiteknot.org on the red carpet of the Grammy Awards in 2009 with Artisan News and urged people to check out the website and support love and marriage equality. The singer and band frontman has also been known to support various charities including Stand Up To Cancer, the Worldwide Orphans Foundation, Teen Cancer America, and Autism Speaks among many others.

In January of this year, the band also took time out of the intense planning of their tour for Sonic Highways to put on a special concert performance in Los Angeles as both a celebration for Dave Grohl's 46th birthday as well as a show of support for MusiCares, the Rock School Scholarship Fund and Sweet Relief.

And let's not forget about the staggering amount of money they helped raise at the Global Citizen Festival from this year. The Foo Fighters, along with the Black Keys, and Neil Young and Crazy Horse, raised more than 1.3 million dollars for UNICEF to help eradicate the huge problem that is childhood poverty. It's no wonder that Dave Grohl has been named by several publications as the nicest man in the rock music world.

While all of this is impressive and inspiring, what's really great about the Foo Fighters is that they're also huge fans of their fans. They give their fans precisely what they want, whether it's in the middle of a performance, on the side of the road and beyond. When they were releasing their album in 2011, Wasting Light, the band performed a set in eight lucky fans' garages. And recently, when Dave Grohl spotted an audience member at one of his concerts crying, he called the guy out and brought him up on stage to serenade him and demanded (in a friendly way) for the man to sing along with him.

It's not enough to just be a band with awesome music. A main reason the Foo Fighters have been around for so long is because they care about people and what they're producing and putting out into the world. They want to do whatever they can for their fans, and they want to be productive members in society. People like them because they're actually good people. And while the Westboro Baptist Church may not be their biggest fans, it's awesome to see the Foo Gighters refuse to be anyone but themselves. Dave Grohl and the rest of the band deserve all the success they've had for all these years, and it's so much fun to see them find funny, clever and poignant ways to keep their activism strong.