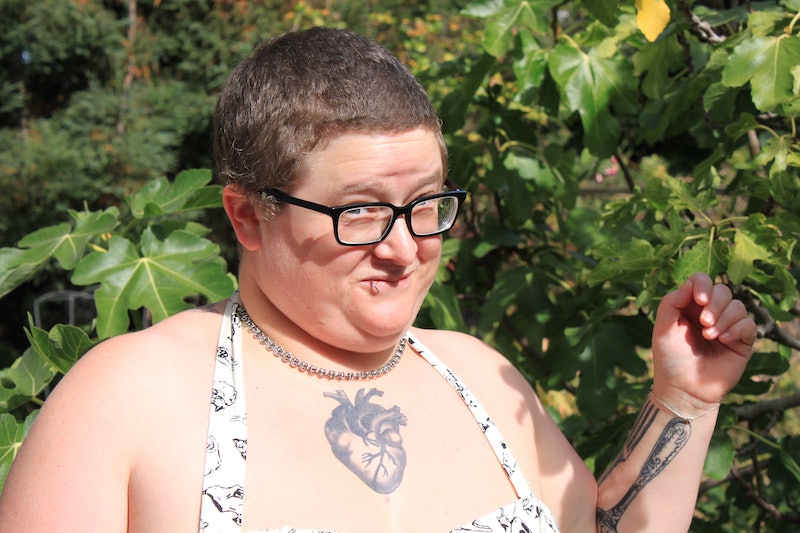 When you're mentally ill, one of your worst nightmares is being outed. Every week, I read about people who share my diagnosis being shot to death by police, injured, or killed in hate crimes, fired from their jobs, abandoned by their partners. Even as a journalist who is out about dealing with mental illness and fortunate enough to work for publications with supportive editors and coworkers, I still don't disclose my diagnosis, because I know the cost that comes with it. Disturbingly, in a highly interconnected society, outing is easier than ever before — and sometimes it's entirely unintentional.

We live in a culture where any horrific crime is accompanied by the assumption that the perpetrator is mentally ill — I often see my diagnosis bandied about in the wake of mass shootings, for example. We also live in a culture where to be known as mentally ill is to be treated as someone unreliable and untrustworthy, and where any expression of emotion or disagreement is attributed to mental illness, rather than to individual autonomy. Thus, the mentally ill woman who reports harassment at work is written off as "crazy," the mentally ill man who reports rape is mocked by police. Everyone views us — the crazy — through the lens of our illnesses rather than who we are as people.

It took me several years of mental health journalism to disclose the fact that I had a mental illness, though some of my editors and colleagues knew already. It seemed a disservice to write about mental health stigma and the complexities of coming out without doing so myself — and many had read between the lines already. I also had a more concrete fear, though: The worry that exposing myself as mentally ill would undermine my professional standing, and also that it would make me a target.

If a hacker succeeded in accessing my medical record, it would be devastating.

The risk of documents about mental health leaking (doxing, as it's known) — which had already happened to me — increases with perceived vulnerabilities, and awareness of a mental health history could act like catnip to people interested in violating my privacy. If a hacker succeeded in accessing my medical record, it would be devastating.

But a curious thing happened once I did disclose that I suffered from mental illness, with readers seeming to split between hating me even more than they already did and others coming forth to talk about their own mental health conditions, sometimes publicly, sometimes privately.

There's a reason anti-stigma campaigns like Bring Change 2 Mind and Time to Change encourage mentally ill people to talk about mental illness — to show the rest of the world that we're just like you. To make it easier for others of us to come out. Nearly 20 percent of Americans experience symptoms of mental illness in any given year, after all.

In some communities, being mentally ill is extremely dangerous. Government workers lose clearance — and livelihoods — if they're outed or decide to seek treatment. Members of many minority communities deal with complicated stigma within their communities and violence from outside it; one element of the nation's epidemic of police shootings that isn't widely covered is that over half involve mentally ill people, many of whom were known to be mentally ill by police and other responders. Given the notable intersections of race and mental illness, there's a dangerous level of institutional violence here that goes unremarked.

Most of those sharing my skin color who are fatally shot by police are mentally ill — I am privileged enough to afford the mental health care needed to manage my mental illness, to not be perceived as a "threat." But if I had a mental health episode and those around me called for help, it's the police who would respond, and it's an encounter that I might not necessarily survive, which is something I think about when I walk by police officers on the street, see the lights flashing in my rear view.

If you're not comfortable with having your mental health records made public, it's time to ask your health care provider about their security — and to consider conducting a quick search to see if they've been the subject of any recent hacking scandals.

For those seeking tools to maliciously out mentally ill people, there are a slew of options in the digital age. People who know where to look can often find evidence of mental illness and may be able to narrow down a diagnosis — not an armchair diagnosis but an actual one — and this kind of doxing is used to promote the notion that someone's views and words don't matter, because they're only the ravings of a crazy person. Once out, that information can never be stuffed inside the bottle, one reason I tried to conceal it for so long.

Oddly enough, even the doctor's office has become a hazardous place for me — and you, if you're mentally ill too — thanks to the rise of electronic medical records, for which we have Obamacare to thank. One of the lesser known mandates of the legislation included a requirement to switch over to electronic records, one that on the surface seems extremely sensible, as it allows for instantaneous cross-provider, cross-system access to pertinent medical information. For those of us with complex medical conditions, especially people using an array of medications, this kind of information can be lifesaving, ensuring that patients aren't exposed to allergens, conflicting medications, or other health risks. It's certainly been useful for me on many occasions, including in mental health contexts.

But it comes with a darker side, too. As evidenced by several hospital hacks, those records aren't always well secured, resulting in the exposure of personal information — my fears about hacking, it turns out, are not entirely unwarranted. Along with Social Security numbers and other identifying information, such hacks often reveal private medical information that could be used for discrimination and public shaming, including mental health diagnoses, and many hospitals have taken few steps to address it — something I considered when choosing my health care providers, and something other mentally ill people should be thinking about as well if they aren't doing it already. If you're not comfortable with having your mental health records made public, it's time to ask your health care provider about their security — and to consider conducting a quick search to see if they've been the subject of any recent hacking scandals.

The problem isn't just hacks, though. It's also poor controls within the health care system that reflect limited understanding about the experience of mental illness.

coming out is dangerous and terrifying, but being outed is much more so, and medical records provide a very easy mechanism for malicious people.

My care provider is behemoth HMO Kaiser, and I have to note that I've actually been immensely pleased by the overall quality of care I get at Kaiser — and no one's paying me to say that. One element of Kaiser's health care programs that I really appreciate is their handling of mental health data. The hospital very sensibly uses a sort of "walled garden" system for its medical records, according to the conversations I've had with care providers, limiting access for to ensure that while every medical record contains a patient's total history, not everyone can see that history — though relevant information is always displayed.

Thus, my primary care provider can see that I visit a neuropharmacologist and a therapist, but she can't see what they're treating me for, though she does see what they're prescribing and at what dosage. Given the broad spectrum uses of psychiatric drugs, that doesn't provide many clues into my diagnosis. It means that I get to control how much she knows about my medical history, while she can still avoid prescribing conflicting medications and offer accurate health advice. Notably, Kaiser providers who need mental health care are provided with offsite treatment, illustrating that the hospital is sensitive not just to the needs of its patients but also to its staff. I haven't seen this kind of sensitivity in other health care contexts, but it also never occurred to me to ask. My therapist proactively told me, which makes me suspect that in cases where it wasn't discussed, mental health information was broadly accessible to anyone who could get to my medical record.

Kaiser is even more careful with records from its transitions clinic, which are kept almost entirely off book — prescribing information is available, and that's about it. Patients have to explicitly release information to other care providers, providing a high degree of control for people in transition who are concerned about their safety or other issues. Even subjects as basic as preferred pronouns are only explicitly added to the front-facing element of a medical record by request and permission.

These measures provide a sense of security and trust, both of which are key to a successful therapeutic relationship as well as a functional doctor/patient collaboration. As a patient, I know I can disclose complicated mental health issues to my mental health care team without having them spread across my record for anyone to see — if I see a radiologist for a chest X-ray, for example, she sees only the part of my record that she needs to access. That in turn means that I get better mental health care, and everyone wins that way.

I have fought very hard for the right and privilege to be out about my mental illness, to be able to write both objectively about mental health subjects and to craft personal essays about my experience within the system, to tell the story and be the story. But even still, I am cautious about who knows how much about my mental health, an issue that's even more fraught for some of my fellow 20 percent.

I work to achieve a world where our diagnoses are just part of us, rather than a weapon that can be used against us, and medical privacy is one facet of a much larger social issue. But it's one that many campaigners don't consider — coming out is dangerous and terrifying, but being outed is much more so, and medical records provide a very easy mechanism for malicious people. I live with an ever present sense of fear, and I want that cloud to lift from all of us. Living with mental illness is difficult enough as it is.