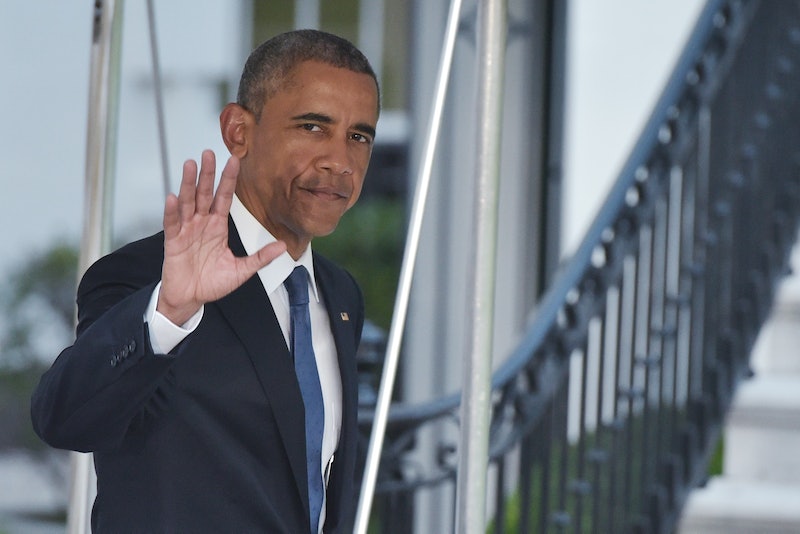 The campaign to replace him as Commander-in-Chief is in full swing, and while he still has more than a year left in office, the speculation about what President Obama will do when he leaves the White House has already begun. He will only be 55 when his term is over, and The New York Times reports that he's aggressively raising money — possibly as much as $1 billion — for a digital-first presidential library. His soon-to-be fellow former Presidents Jimmy Carter, Bill Clinton, George W. Bush, and George H.W. Bush all took different approaches to retirement. Carter started a foundation and won a Nobel Peace Prize; Clinton started a foundation with his wife and presidential candidate, Hillary Clinton, and their daughter, Chelsea; George W. Bush has been a largely private person; and George H.W. Bush has, among other things, got in the habit of jumping out of airplanes on his birthday.

But other than building a presidential library, which is standard operating procedure for former presidents, Obama hasn't had a whole lot to say about what he wants to do next. In a June 2014 Tumblr Q&A, Obama said he hasn't quite mapped everything out yet but definitely has one thing on his to-do list: "I know what I'll do right after the next president is inaugurated. I'll be on a beach somewhere drinking out of a coconut."

He might not have an official agenda, but over the past several months, Obama has dropped a few hints and made a few jokes about some of the things he has planned for 2016 and beyond.

During Obama's final appearance on the Late Show With David Letterman in May, the president told Letterman during commercial breaks that he plans to take a month off, the Associated Press reported. "It does feel good not to have to be on the stump," Obama said, when talking about the 2016 presidential campaign. There are a lot of causes the president wants to be involved in as well, he added, but he told the also-retiring Letterman that he wanted the two of them to hang out. "I was thinking you and me could play some dominoes together. We could go to the local Starbucks and swap stories."

During the May launch of an national nonprofit initiative to help low-income minority boys called My Brother's Keeper, President Obama gave an inspirational speech about how he hopes to use his status to help, and referenced his personal struggles growing up.

"I grew up without a dad," the president said. "I grew up lost sometimes and adrift, not having a sense of a clear path. And the only difference between me and a lot of other young men in this neighborhood and all across the country is that I grew up in an environment that was a little more forgiving. ... This will remain a mission for me and for Michelle not just for the rest of my presidency, but for the rest of my life."

Remain In Washington, D.C., At Least For Now

Most presidents can't wait to flee the Beltway once their term is up, and the presidential library Obama is building is planned for Chicago, so he'll have an office there. But Obama and Michelle have said since their daughter Sasha will only be a sophomore at Sidwell Friends School when their time in the White House is up, they'll stay in the D.C. area to give her some stability.

"We've got to make sure that she's doing well ... until she goes off to college," Obama told Barbara Walters in 2013. "Sasha will have a big say in where we are."

Whatever the president ends up doing after his successor has taken over, it's clear that he still has a lot of energy and a lot of motivation to use his status to affect social change. While he may want a break in the short term, Obama doesn't seem like the kind of ex-president who will be able to sit still for very long.

More like this
What Is Barack Obama’s Net Worth? He Makes *Way* More Now As An Ex-President
By Hugh McIntyre
Celebrities & President Biden Are Enraged By The Leaked Roe v. Wade Decision
By Alyssa Lapid
President Zelensky Spoke Out On Ukraine's Chances Of Hosting Eurovision Next Year
By Sam Ramsden
Michigan’s Governor Is “Going To Fight Like Hell” To Protect Abortion Access
By Andrea Zelinski
Get Even More From Bustle — Sign Up For The Newsletter